What are peoples preferred font and colour scheme for playing IF/Text Adventures?

On the hunt for some ideas for 2021. Doesn’t have to be anything crazy, a white background with black text of a certain font at a particular size would be just as appreciated.

Florescent magenta on a yellow background.

I used to prefer grey text on a white background, but my eyes won’t tolerate that anymore. Anything of sufficiently high contrast on a dark background is good with me. Anything else becomes painful and unreadable within minutes for me.

Back in the day I preferred green or amber on black. They are still a preference but I am probably an outlier.

I am nostalgic about the old-school looks. I like a black fixed-width font (Monaco on Mac) on white bkgd, and I also like green/amber on black bkgd…

In Gargoyle, I’ve got background colour as #000022 (dark blue), foreground as #dddddd (off-white), and font as IM Fell Great Primer. 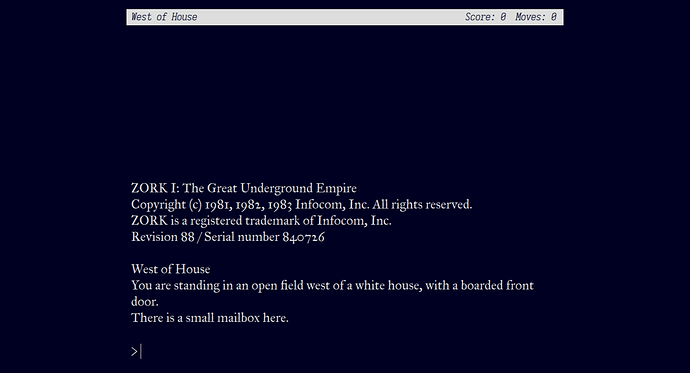 This is Fabularium running on my phone, but the settings are copy-pasted from my configuration of Gargoyle (since it uses exactly the same .ini file). The one exception is that I believe I also have justified text in Gargoyle but that doesn’t seem to work in Fabularium. 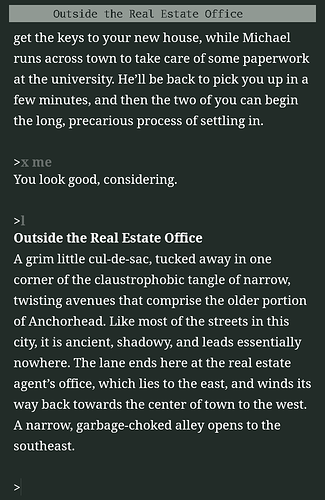 I am using a white font on blue background. The scheme more or less resembles the the colors that came with the Amiga Workbench 1.0 - 1.3. I obviously can’t shake off my old habits. This is easier for me on the eye than black / white combinations but I guess the truth is that color schemes are a very personal thing and what might work for you might not work for someone else 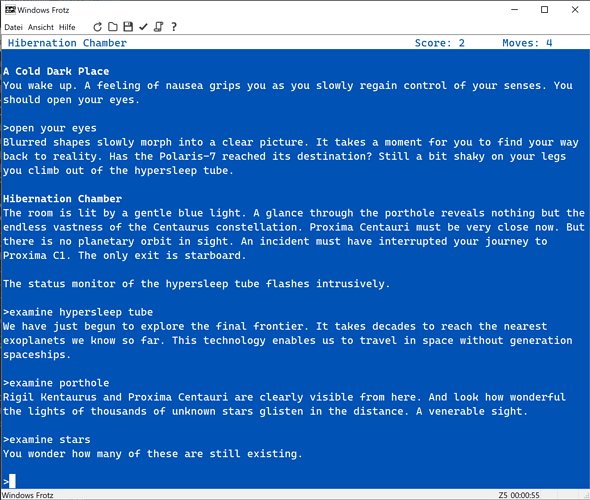 When I am using ZoomText, I frequently use a blue background and white or yellow text, just like that.

Though the IM FELL font doesn’t have Greek characters. So I’ve currently switched to CMU Concrete: 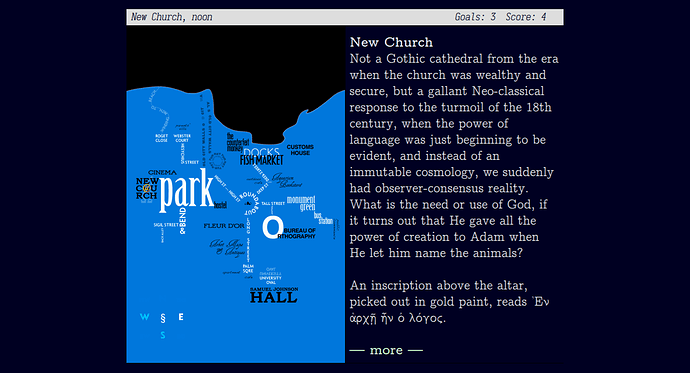 It depends, but I usually go for black text on a white background at least. It might be a leftover from my Macintosh days.

For older games, I tend to use monospaced fonts (e.g. simply running Frotz in a terminal window). The author may have expected it, and even in games that supported mixing proportional and monospaced text (e.g. the Infocom games), this was not always enforced as much as it perhaps should have been.

Some games clearly expect the interpreter to render emphasized text as italics (not underlined), so for those I seek out an interpreter that supports that. (Incidentally, Frotz recently started using italics by default when available.) More recent games probably expect that the interpreter will use a proportional font, so they are better at specifying when it shouldn’t.

But I usually don’t go so far as to specify exactly which font to use.

I didn’t realize Monaco was still a thing in the Mac world, but back when played Infocom games on a Mac Plus, I would always use Monaco 9 points, to the point where I used ResEdit to upgrade the interpreters on the games that didn’t support it. I just didn’t particularly care for Geneva 12 points, so I was a bit disappointed that the version 6 games used that with no option to change it.

Fun fact: Even some of the non-graphical Infocom games specifically check if they’re running on a Mac. Both Beyond Zork and the Solid Gold version of Wishbringer avoid using bold or italics in at least some cases. I’ve gotten the impression that Brian Moriarty cared a lot - even more so than the average Infocom Implementor - about getting his games to look good, so maybe he just didn’t like the look of bold/underlined Monaco 9 points? (He also added special cases to Trinity for when running on Atari ST. Probably because that seems to have been the only one of the original interpreters to actually use italics rather than underlined text?)

I was thinking mainly of the Legend Entertainment parser games (Gateway, Eric the Unready, etc.), but I’m sure others could come up with other examples of games that still hold up well. 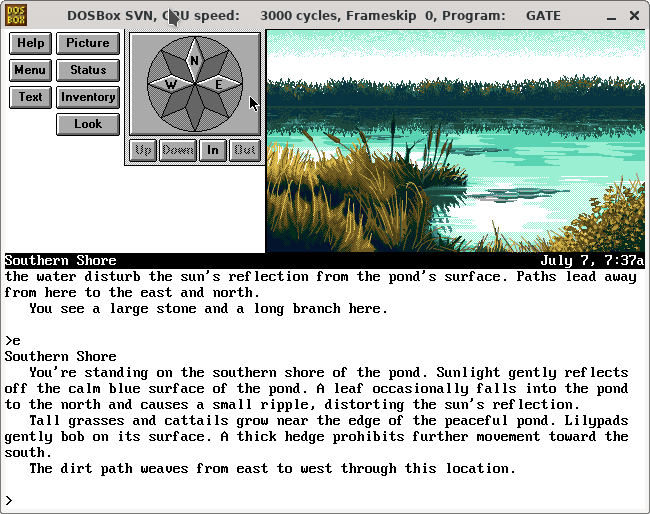 (I don’t like the “Menu” mode. The “Half” mode strikes a nice balance between the graphics and the text, I think.)

This is what Bob Bates wrote recently in response to a question about how they were developed:

The short form is that my biggest worry upon starting Legend was that we’d get sued by the litigious new owners of (what was left of) Infocom. So I wrote up specs for a new parser and black-boxed it out to an independent company. What came back was written in C, and we built our engine around it. All the Legend games were written in C until we migrated the engine to C++ for Blackstone. The Unreal games and Wheel of Time were written using the Unreal engine. Thaumistry was TADS, which I chose over Inform (and other engines) because it very powerful and customizable all the way down.

Which makes it sound like DOS emulation is the only sensible way to go?

Both Beyond Zork and the Solid Gold version of Wishbringer avoid using bold or italics in at least some cases.

even in games that supported mixing proportional and monospaced text (e.g. the Infocom games), this was not always enforced as much as it perhaps should have been.

DOSBox has no plans to ever support Windows games and anything that currently works is purely accidental, while DOSBox-X supports DOS and Windows including Win9x and Me.

Because Windows is a much bigger OS and games are much more finicky than their DOS counterparts (think trying to have multiple versions of QuickTime for Windows or Direct-X on the same system), DOSBox-X supports using qcow2 disk images arranged in a a parent-child relationship, so that a single OS disk image can support unlimited mutually incompatible games without eating all your storage space, and allowing each game to ‘see’ a pristine Windows environment where it is the only thing installed.

For even more fun, consider the DELAY routine in Bureaucracy. I don’t think any modern interpreter handles that one as intended, for pretty good reasons. (It uses a busy-wait loop with a hard-coded number of iterations for each interpreter number.)

I guess it might be possible to rewrite it using timed input instead.

Yes, but only where necessary. There are still things that look like they were written with a mono-spaced font in mind, but the games don’t enforce it. For instance, the cornerstone in Deadline and some of the Library Mode information in A Mind Forever Voyaging.

For Deadline it’s purely cosmetic, and I don’t think any of Infocom’s own version 4/5 interpreters used proportional fonts for the lower window so I guess it was never considered an issue in AMFV.

I hadn’t heard of DOSBox-X, but since I don’t own any copies of Windows 1.x/2.x/3.x/95/98/Me, the advantages may not be as pronounced for me. (Though FluidSynth support might be nice, now that I no longer have a sound card that does native MIDI…)

(I’m trying to make my posts replies to the relevant parent post, but I guess I keep hitting the wrong reply button?)