For my ongoing Infocom playthrough, I have finished work on The Witness. That means it is time to revisit Planetfall. I think it would be hard to discuss it without discussing Floyd. My understanding is that Floyd has generated a lot of interest–academic interest, even–as a milestone in terms of players’ emotional response and attachment.

I am curious about attitudes toward Floyd in this community.

This may sound bizarre, but I played Stationfall before Planetfall, which mucked up any chance I had at a “normal” reaction to events in the first game.

I suppose this is a craft question, too–so many of you write games, after all. Floyd is not especially interactive, and he isn’t much of a conversationalist, either. Despite these limitations, he has had a tremendous impact on players over the years. Is this an instructive case? Or does it say more about the expectations of players at the time?

Or, should none of this interest, I’d love to hear any old thing you might have to say about Floyd.

Floyd is not especially interactive, and he isn’t much of a conversationalist, either.

He’s extremely reactive, though. I think that’s what carried the day.

It was a couple of years before I got to play Planetfall, but from what I understand he was one of the earliest examples of a sidekick character. One who isn’t there to hinder or frustrate you in any way. That alone would have made him stick out if he worked well enough.

He’s also a bright splash of colour in what would otherwise have been a fairly drab game. While it does have some standout moments (for me, that’s riding the tube car, and the miniaturization puzzle) you have a lot of samey rooms, and some of the puzzles seemed pretty uninspired or repetitive to me.

I think he struck a pretty good balance between being endearing and just annoying: He’s child-like, so you don’t expect him to follow your instructions. He reacts to (some) things that you do, and he has enough things to say that it doesn’t come off as too mechanical. He goes off on his own every now and then so that you can have a bit of peace and quiet, but you don’t have to go look for him when you need him.

I think Stationfall is the better game of the two - at least in most respects - but I guess it didn’t break much new ground?

I chalk up Floyd’s enduring appeal to smart writing.

His buoyant nature adds a dose of sweetness to the game’s early stages of drab survival and key cards.

His antics aren’t Turing A.I., but they come across as lifelike enough for that necessary suspension of disbelief.

Floyd is not especially interactive, and he isn’t much of a conversationalist, either.

It’s something like Teller of Penn & Teller: His limited repertoire makes the little he can do that much more interesting.

He’s also the gun in Chekhov’s maxim: We know he’ll be useful at some point in the game, and when that moment arrives, it’s a doozy.

And, like so many others, Floyd’s fate in the game was the first time I found myself pushing away from a video game feeling ripped up, which sealed him in my personal memory banks.

Floyd is doing a lot of work in Planetfall. Like I said: Smart writing.

He’s child-like, so you don’t expect him to follow your instructions.

This is really important, yes. It puts him in the tradition of other early Genuine People Personalities. Eliza was a psychiatrist (you expect her to reveal nothing about herself and always bring the conversation back around to your statements). Parry was a schizophrenic (you expect him to speak in non sequiturs and obsessive repetition).

He goes off on his own every now and then

I hadn’t thought about this, but it’s smart in a couple of ways. It lets you imagine that Floyd is off doing something, which implies motivation and agency.

These are all helpful comments. I’d love to hear from more people, even if they are not craft-related. For instance, I think emotional reactions to the big moments in Planetfall are quite meaningful.

He’s extremely reactive , though. I think that’s what carried the day.

This is a good point. I think I sometimes fail to consider reactivity. I’ve seen lots of people mention Floyd’s comments when the player saves or restores, and rightfully so. His color commentary really is a lot of fun. Even though conversation is not fruitful, Floyd is frequently commenting on player action, which contributes to perceptions of presence and agency.

I think Stationfall is the better game of the two

So do I. It turns out to be surprisingly subversive and creepy. Still, both are very strong parts of the Infocom canon. I think the environment of Planetfall is a bit creepy, too, but this quality isn’t a focus. Rather than spice up the setting, Meretzky keeps things interesting with Floyd. I read somewhere that he was looking for ways to trim back the file size, so he couldn’t have invested more in atmosphere even if he had wanted to. Based on the game’s reception, it seems Floyd was the better choice.

It’s something like Teller of Penn & Teller: His limited repertoire makes the little he can do that much more interesting.

This is very apt, and Floyd’s positioning does give him his big “blockbuster” moment.

And, like so many others, Floyd’s fate in the game was the first time I found myself pushing away from a video game feeling ripped up, which sealed him in my personal memory banks.

Different game, but I replayed the ending of Stationfall many times, including going back a day or two, looking for a way to avoid killing him.

I read somewhere that he was looking for ways to trim back the file size, so he couldn’t have invested more in atmosphere even if he had wanted to.

There was an article in the Winter/Spring 1988 edition of The Status Line that, while it unfortunately doesn’t go into much detail, seems to imply that during the early years they had to keep the data files smaller than the theoretical upper limit to allow them to work on all supported platforms. So presumably Stationfall was allowed to be larger because computers had gotten more powerful. The article contained this diagram: 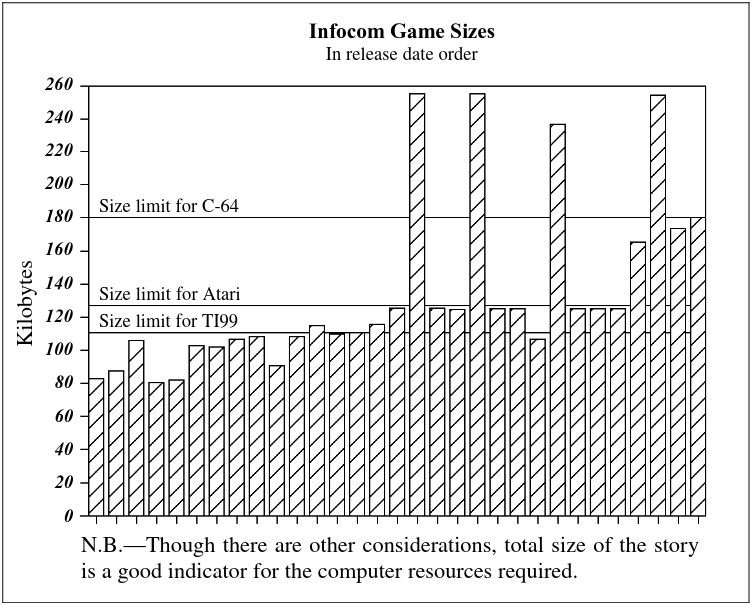 Apparently figuring out which game is which was left as an exercise for the reader.

Yes, that’s well-known. (And the C64 IF authors are still working with those limits today!)

Having somehow missed that article, I always wondered what the practical (I.e. market-based) size limit was for golden age Infocom. I blamed the TRS-80 at the time.

Based on nothing, a friend’s father had a TRS-80 and I didn’t like it.

Apparently figuring out which game is which was left as an exercise for the reader.

There’s a list of mostly chronological games at the end of the newsletter.

Floyd really ‘carries’ the game. At some point I entered the ‘save’ command and he said something like: ‘Are we going to do something dangerous now?’ It was the first game I played where an NPC responded to meta commands.

Yes, that’s well-known. (And the C64 IF authors are still working with those limits today!)

The C64 appears to have been on the upper end of the lower end of the scale, though. I don’t know what - if anything - they were specifically targeting when the games were just a little over 80 KB.

I think it makes some sense that because Zork 1-3 was split from the original MDL version they wanted the games of a similiar size and didn’t hit the TI99 limit. About Starcross and Infidel I don’t know but I guess they simply were not very big games. All the other games struggled with the TI99 limit at the look of it.

That would be my guess, but I have no way of knowing. MobyGames has a picture of what appears to be a double-sided diskette so maybe one side has the interpreter and dynamic memory, and the other has the static data?

From reading the blurb on the back of the box, it was evident that Floyd would die and I was supposed to feel sad about that. The actual sequence of events when I played was something like:
Find a dangerous-looking laboratory.
$ floyd, enter lab
“You first.”
$ save
$ enter lab
[I start dying from radiation sickness]
Floyd says, “you look funny with your hair falling out!”
Thanks, Floyd!
Died, restored, Floyd died shortly afterwards, while I was still a bit peeved with his reaction to me dying!

Floyd says, “you look funny with your hair falling out!”

(This derails the thread a bit, but: the Osborne 1, perhaps? The disks were 90kb; Zork and Starcross (at least) were published on it.)

One of my favorite Floyd responses (which I believe was removed in the Solid Gold version?) is this one:

And speaking of bugs, it’s actually possible to get the access card from the Bio-Lab without Floyd’s help:

Certain actions (in the version I’m playing, “READ” is one of them) can be flagged to automatically pick up objects for you. But instead of generating a proper “TAKE” action, it just does some basic checks to make sure the object could be picked up. Any object that doesn’t want to be picked up automatically like this is expected to have the TRYTAKEBIT flag, but the card doesn’t.

So while it’s a nice feature, it’s a bit error prone. I’ve come across this type of bug in several other Infocom games.

The TI99 is notably not a problem anymore these days (when you’re into targeting retro platforms). One of the TI’s “rockstar programmers” back in the day, Barry Boone, disassembled Infocom’s TI interpreter and made it a two disk interpreter, similar as Infocom did with the Atari 8-bit. So quite a few of Infocom’s games that did not see the release on the TI due to the size limit, but made it onto the TI as unofficial ports.

Our problem child actually was the Atari 8-bit but I recently wrote a program that modifies a standard Z3 file so that the Atari two disk interpreter accepts it and places it on valid disk images. It’s part of the Puddle BuildTools GitHub - ByteProject/Puddle-BuildTools: Infocom Z-machine build environment for 25 retro computer systems, preconfigured for PunyInform

Regarding sizes of games: my game Hibernated 1 Director’s Cut holds about 90kb when compiled as a Z3 game. And it actually is considered a full featured game. The size heavily depends on which library you are using and Puny does a good job of giving authors aiming to target retro systems plenty of KB to create a sophisticated release.

As @zarf already pointed out, Floyd is more of reactive nature, which I actually enjoy a lot. My favorite line from him remains what he says when you’re saving your game state. I know there is lots of IF out there that really goes deep in terms of interactive communication. I write my games intentionally to have “canned” conversations , so all you need to do is TALK TO … and trying one of the more advanced conversational mechanics known from Infocom games will result in giving a hint that all you need is TALK TO … I think in the end it doesn’t matter much if the sidekick is more active or reactive as long as it works in terms of immersion and providing a vibrant, living world to the player.