order your IF Comp in Public tshirt!

I’ve split this off from the IFComp in Public thread (tinyurl.com/2nswlv).

Everything is set for you to order a tshirt! I’ll be taking orders only until November 15th.

I’m offering Paypal just for the convenience of people who don’t want
to send stuff in the mail – they take a small cut of credit card
transactions, but I’ll cover those costs as they’ll be pretty
negligible.

As I mentioned on RAIF, there’s only one more week left to order tshirts. Shoot me an email if you haven’t yet!

Is the image on the front, or the back? If front, you probably need to be specific with them that it’s a larger size. They tend to assume “pocket-sized” (and even pocket positioning) otherwise. At least, the ones I’ve used before do.

That’s pretty cheap for a shirt. The place I use seems very affordable at about $11.50 per shirt, plus $5 for mailing (priority mail bags - an extra $5 for global priority). I think last year, they were $17 total.

The demand for IFComp top-10 shirts seems to have decreased in the past couple of years. I think Stephen used to take 20 to 25 orders. It was down to about 16 when I did it in 2005, and less than that last year (maybe 11 – so I ordered several more just for me to make the order). I’m not even sure what the interest will be this year. It might be worth asking first, before I get a quote on 15 shirts and only sell 5 or something. [emote]Smile[/emote]

Hopefully the cheaper price of your IFcomp in Public shirts are working a little better!

Thanks for the heads-up about that, this is the first tshirt order I’ve done and I’m learning all sorts of little things you wouldn’t normally think of. The art is on the front – the link in the original post to the tshirt mock-up is pretty much how it will look printed.

The tshirts definitely are cheaper than I thought they would be! The printer was showing me shirts as examples and he pulled out one that he said was popular. It was like $4 a shirt. Then he showed me an American Apparel shirt, and I said, ‘oh, that must be like $15?’. He says, no, that’s retail – these are $5!

I am doing everything at cost though. For mailing I just weighed a tshirt on our postage scale and estimated first class/priority from there. I’m pretty sure I can mail one tshirt first class (haven’t actually tried yet [emote]Smile[/emote] ), but anything more than one shirt and you go right up to priority mail (almost twice as expensive). Do you have the printer mail the shirts to those who ordered them, or do you hand mail them? I’m going to mail them myself.

I don’t have that many orders yet actually. I’m pretty sure I’ll have to order extra to fill out the order. The problem as I see it is advertising – I know there are people who would want the shirt if they saw it, just because I’ve run into friends on the street, showed them the art, and they’ve ordered the shirt right there [emote]Smile[/emote]. But there is a relative lack of advertising venues on IF hobby sites – that is, advertising I can afford, as in, free advertising [emote]Wink[/emote]. Anyway, it’s been a fun experience regardless.

If anyone missed out on these in 2007, or if your shirt like mine is looking a bit ratty after 12 years, you can now wear (a low-res) version of them in Animal Crossing New Horizons, courtesy of @Afterward! 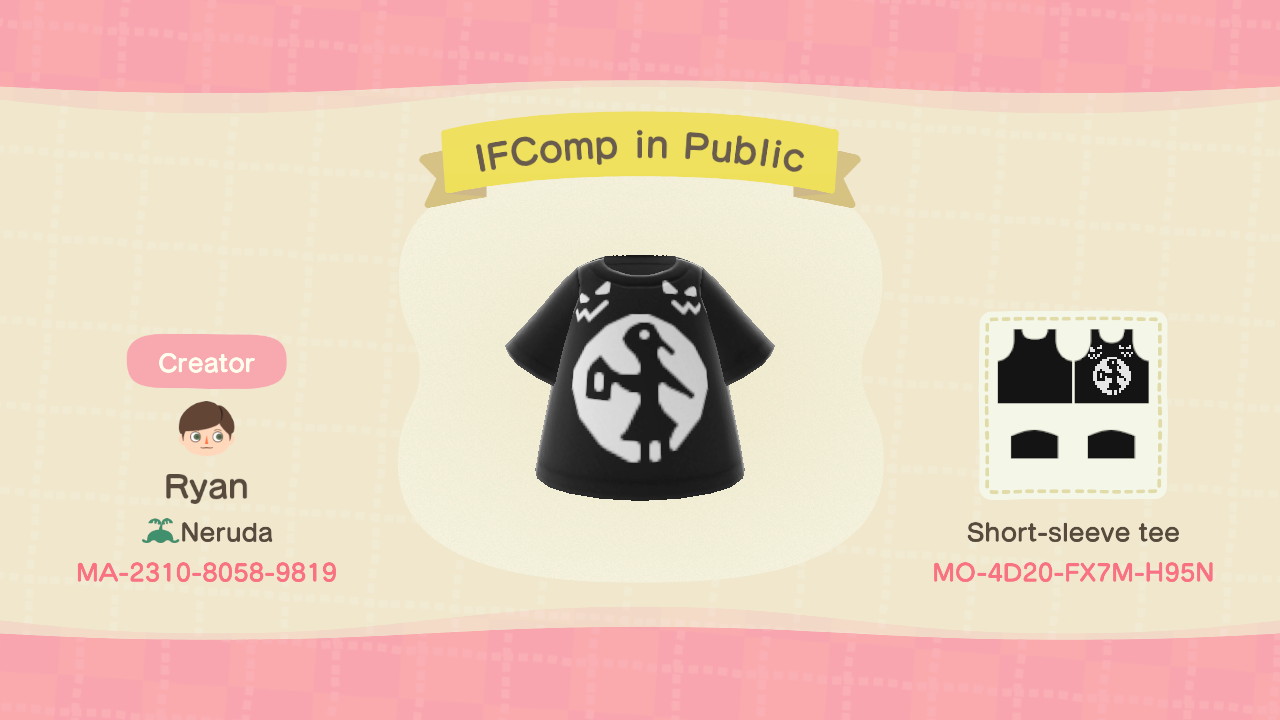