Of Their Shadows Deep-- Author's Note

Most of what I would say about the process of making OTSD is detailed in my conversation with Drew Cook here, so I’ll just link to that instead of repeating it. But there was indeed a day, right after an ice storm, when my mother stopped being able to say my name; and it seemed then that there must be something I could do, some magical task I could perform, to restore her words and set the world to rights. OTSD was born of that day.

A few notes about other points of possible interest:

As always, there would be no game without the generous help of my testers, who contributed so much to it: Drew Cook (@kamineko), Dark Star (@DrkStarr), Jade(@Jade), Zed Lopez (@zed), Mathbrush (@mathbrush), Eva Radke, Edo Rajh (@edo), and Mike Russo (@deusIrae).

And thanks always to everyone here who patiently answers technical questions. If you got exasperated with my “beads on a string” threads, or my “multiple papers and disambiguation” issues, I hope you can see how much those discussions helped the game.

I don’t think I would have written this if I hadn’t played Mike Russo’s Sting and N. Cormier’s This Person Is Not My Father. Big thanks to them both for inspiring me to be brave enough to try and write about the awfulness of my own loss.

Thanks isn’t good enough for my sweetheart Tom, who is travelling this road with me-- of being a caregiver for someone with dementia. I don’t like to think about what that road looks like when you’re alone on it.

The riddle poems are original—I wrote them for the game. There are much better examples of concrete poetry out there, though. For a particularly fine example, see John Hollander’s Swan and Shadow. And I accidentally stole John Hollander’s cat image. Although the text of my poem is original, after I published the game I looked up more of John’s concrete poems and realized that the shape of my cat poem was nearly identical to the shape of his cat poem. Sorry, John—although it’s been at least 20 years since I’d seen your poem, that shape sure must have lodged in my head. It was not intentional, and I’ll revise the image when I can work up another one.

William Butler Yeats’ great poem When You Are Old is quoted in several places in the game, as it is one of my mother’s favorite poems. If you missed it, the book the old woman holds has the text of the poem in it, or you can read it from the link. Although it reads very sweetly, it’s actually a pissy little piece of work. Yeats probably wrote it for the fabulous Irish revolutionary Maud Gonne, whom he loved his entire life. She married another man, and this poem is a dig at her: “I love you for all the things other men don’t care about, and you rejected me. You’ll be old one day and look around and realize you missed the boat on love.” What a whiner. Still, it is a lovely poem and fit my needs well.

And I have to mention two poems that I didn’t quote because they are not in the public domain, but which heavily influenced the game: One Art by Elizabeth Bishop, and Mirror by Sylvia Plath. Reading these always makes my heart hurt with their absolute and unflinching truth.

A word on the setting: right before the pandemic hit, my husband and I quit Austin, Texas, where I had lived nearly my whole life. And we brought my mother to live here with us when her dementia became too advanced for her to live alone (a decision I will forever question, even as I will forever be grateful that I made it). Austin has changed beyond recognition from the badass city I grew up in, and my husband always wanted country acreage. So we bought a chunk of land in the Texas Hill Country, right on Barton Creek, which is one of the most protected and beloved creeks in Texas. All the locations in the game are actually here (although my cave is not tall enough for a person, and it’s in a different location. Also, the stream only runs after a rain. Poetic license). The gorgeous Texas Hill Country, with its incredible flora and fauna, is fast being paved over and lost to strip malls and housing developments, so if you get a chance to spend some time here before it’s gone, do it, as long as it is not between the months of June and September (relentless heat, giant centipedes, etc).

Thanks again to everyone who played and reviewed it. It is a downer, and I’m thankful for the open-minded reception it got. I’m very fortunate to be a part of the IF community and to get to write what I want and receive thoughtful feedback on it. And coming in second after @mathbrush is just a huge honor. I read his reviews and played his games for years before I wrote anything, and so long before I had the pleasure of making his virtual acquaintance, he was a presence in my life. Thanks to him for everything he does for this community.

And if someone in your life has dementia, my heart goes out to you. It’s terrible beyond words to describe it, and although I made a stab at describing it with OTSD, nothing can ever really convey how lonely and sad this disease makes everyone touched by it. Cherish your words and your memories, y’all. And cherish them in your loved ones.

I haven’t been on this forum for very long, but when I joined, you were one of the first people who welcomed me here. I thought I would check out the games you’ve made, out of curiosity, and when I saw the content warning on OTSD, I had to put it on my to-play list.

This is a brave and significant work to have made, and it deserves every bit of recognition that I gets. Dementia is a deeply-terrifying thing for me and has affected my family quite a bit in the past, and will likely continue to affect us in the future. I’m cherishing every moment I can still share with those who I have left.

I don’t know if I’m in an emotionally-stable-enough point in my life right now to handle this game, but I’m determined to play it in the future, once I’m ready to.

I wish you all the strength, and congratulations on how well this did!

I don’t know if I’m in an emotionally-stable-enough point in my life right now to handle this game, but I’m determined to play it in the future, once I’m ready to.

I’m glad the content warning served its purpose well. Frankly, I don’t know if I’d be stable enough to play it right now. I’m sorry to hear about the run of dementia in your family-- I’m in the same boat. It is terrifying.

Thanks for the kind words. I see from your other thread that you’re gearing up to do your own emotionally significant work, and I wish you well with it.

My mother has been on the slow road of dementia (alzheimer) for about six years now. She can still speak the names of her loved ones and their family relations, but everything else is fading fast. You have to intimately know her and her life story to make sense of the syncopated monologues wherein she recounts some of her memories when we pass a familiar place (like her old high school).

However, until now I do not feel the pain and sadness and mourning I see in my father and sister. When I go on walks with my mother, I still see her unfiltered curiosity and joy of being outside in the world. It helps to focus on that aspect instead of on the brilliant rational brain that is being wrecked.

Every patient will have a different path, but it’s always in the direction of loss.
I’m just happy my mother still sings when we walk outside ( lalala-ing Happy Birthday ad nauseam…) and smiles when she sees a flower.

I’m putting off playing Of Their Shadows Deep until I have some days to fully devote my attention to it.

I still see her unfiltered curiosity and joy of being outside in the world. It helps to focus on that aspect instead of on the brilliant rational brain that is being wrecked.

We have finally reached this stage. The first years were terrible ones where she was constantly panicked and angry and depressed. Watching her grope for words, fail to find them, and melt into shame and fear was so awful.

Now, she seems to have forgotten that the language is a problem, and is like a child, full of bizarre fantasies and joy at nature. She thinks it’s our fault when we don’t understand her (which is most of the time now), and this is preferable by far.

I’m so sorry about your mother. Give her a hug for me.

I really appreciated this game, and found it evocative and beautiful. I put off writing a review of it so I could make it my 2500th review: 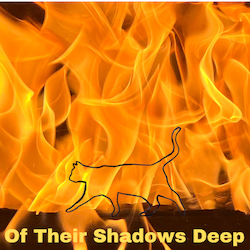 Of Their Shadows Deep

A story about love and disease and loss. Contains graphics and has a screen reader mode for use with text to speech software. Written in Inform 7 for 2022 ParserComp. Play time about one hour. Content warning: This game is about dementia.

Thanks, Brian. And thank you for all your reviews and open-minded engagement with IF games of all sorts. And most of all, thanks for your help in testing it. You’re a rock star.

I put off writing a review of it so I could make it my 2500th review:

Hah, that’s funny – my review of Of Their Shadows Deep was my 299th one on IFDB, and I was a little sad it wasn’t the 300th. Hopefully the first IF Comp game I pull is special (or if I finish Cragne Manor before then, it might be fun to write up a review of that – I think the only people who’ve got reviews of it on IFDB are either authors or testers).

or if I finish Cragne Manor before then, it might be fun to write up a review of that

Oh, this is a must for your 300th. I haven’t commented on the thread, but it’s been a joy to “play” CM this way. Even my husband has loved reading it (and you should be very flattered by this, as he avoids parser IF like the plague)… he adored the slaughterhouse bathroom horse.

Ha, glad to hear it, and that it’s been an accessible on-ramp for your husband! Though, um, I’m not sure “adored” is a wholly appropriate response to that horse…

Though, um, I’m not sure “adored” is a wholly appropriate response to that horse

Oh, right, you haven’t met him. I have to have a limit on the amount of creepy baby doll heads we can have in any given room, and how many he can nail into unexpected places, like on closet ceilings and in sink cabinets. That man can spot an abandoned baby doll head in the gutter from a block away. He thought it was just adorable when a tarantula decided to live in the one he put in our front yard. So yeah, he dug the horse.