I’ve completely recut M4ZVM to retain as many benefits as possible, but sitting inside the 48K envelope through a 64x16 display. This meant analysing games to see where the best compromise laid for playing games. PunyInform games are of course excellent to run, and a lot of infocom z5 games work. The z4 games are either too large or need tweaking to fit inside the screen real estate.

I had to remove the debug feature, adapt to the new screen, remove z6 support, and reduce the available dynamic z-memory to allow for optimal performance. Requires 48K and Disk support. At this point they both require LDOS 5.3 to run.

Full downloads including source, along with more detailed features and limitations are available from:
sijnstra / M1ZVM · GitLab
sijnstra / m3zvm · GitLab

I’ve had some great feedback over the past two weeks and have been able to turn around a second release. Many thanks to Jonathan Hoof for thoroughly testing the Model 3 version which not only helped prove the stability, it also helped me find edge cases that could improve performance. Also thanks to Ira Goldklang who tested the software across a number of different DOS releases on the model 1 (NewDos80, DOSPlus).
Release 2 improvements include:

A new release is out, with a focus primarily on speed. The core has been thoroughly rewritten (and properly aligned across the Model 1, 3 and 4 versions for my own efficiency). It’s also been thoroughly tested (thanks again to Jonathan Hoof for support, feedback and testing). Speed and code size have been improved each release. To give an idea of the improvement between this and the previous versions, I’ve timed an interaction in Zork: The Undiscovered Underground, which is much more computationally intensive than any previous infocom releases.

As the core processing code is common across the versions, the Model 4 version will have the same proportion of results operating at 4MHz, so you can halve the times.

The links are the same as above, with a summary of updates in the changelog:

After posting this I had the sudden urge to go back and check a few things.

That Zork 1 timing seemed slow, so I tried an earlier release. This time, Release 75. Sure enough…
Zork 1 Rel 75 Using M3ZVM R4 takes 1.03s
Almost exactly the same for Zork 1 Release 88. What happened after the Masterpieces version?

What happened after the Masterpieces version?

One of the ZIL programmers here could probably explain what happens mechanically, but R119 of Zork I is a “Final Internal Release” (source: Infocom Fact Sheet). That designation can be a little misleading, as many FIRs have serious and often game-breaking problems. For instance, the diver’s hose tears for no reason in Cutthroats, Planetfall can stop listing dropped items in room descriptions, etc. Sadly, I know this from playing several FIRs unknowingly!

While I can’t say what’s different in Zork I R119, I can say that FIRs aren’t usually customized or tested for consumer audiences.

Thanks for making this resource available to the community!

Teaser campaign for the next upcoming release - Shogun in 48k…
After the past few months of gradual speed and memory footprint improvements, I’ve carved out enough space to be able to allow for some slightly larger games to be playable on the 48k TRS-80 Model 1 or Model III. Border Zone and Shogun (without the graphics, making the maze a little tricky). I would also highly recommend a hard drive to play these. While I’m still testing to make sure things are running as expected, here’s some emulator screenshots of what it looks like to play Shogun on a platform it really wasn’t intended for: 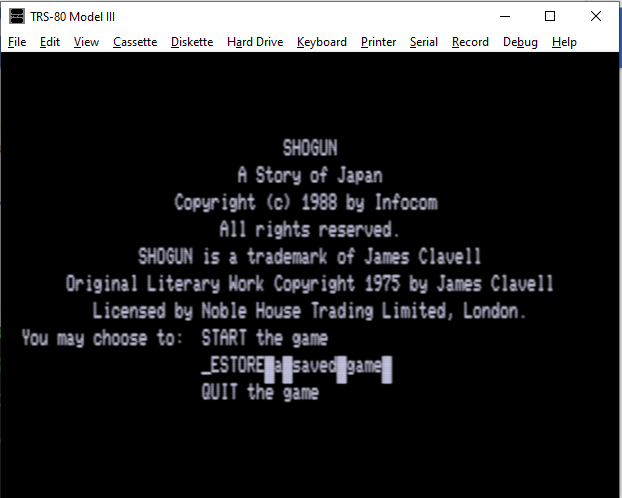 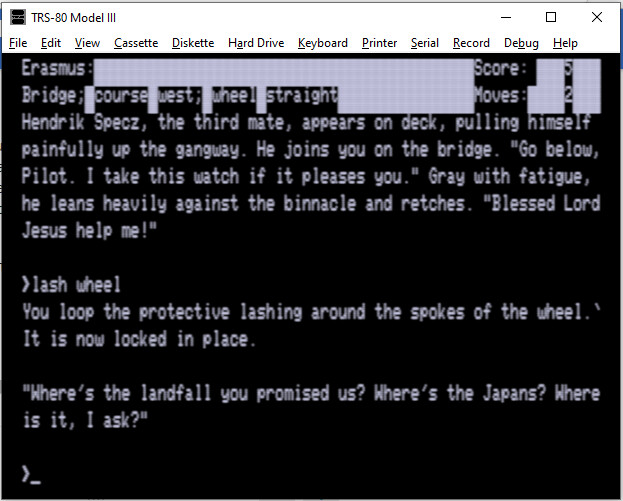 The next release of M1ZVM/M3ZVM/M4ZVM has been released! Apart from general speed improvements, and the ability to now load and play Border Zone and Shogun on the Model I/III, other fixes include:

binaries and source code for the model III version are available from sijnstra / m3zvm · GitLab which links through to the other versions. Feel free to reach out with any questions/comments/feedback.