Does anyone have a clue what the minimum number is, for the largest parser games, of turns required to win? I recently finished making a walkthrough for my game, and couldn’t help being curious about where it would place. Is there such thing as the #1 largest parser game? Not that that is a goal to be aimed at, I just got curious…

I know what you’re asking, but I suspect a speedrun/direct walkthrough move count isn’t necessarily a direct indication to how actually large a parser game is. Especially if one can spend 2000 turns in a maze of twisty passages, all alike.

Aside the ancient maze-navigating (and the longest linear maze, that of appallatron…) I think that the point is that an IF, even its text adventure precedessor, isn’t designed for speed running, the maximum enjoyment is in discovery of tiny details, enticing to explore every nook and cranny of the simulated word in many diverse manners (here the good’ol parser has a strong point in favour of more modern interfaces: the variety of actions, between scores and even hundreds, net of verb synonyms)

(Michelangelo’s masterpiece proves definitively that the devil is NOT in the details; actually the opposite, and the most crucial election in the world is watched over by said masterpiece, whose steer a rather elite electorate to always elect the right man to the oldest Office in history (active since the days of the legendary King Numa…) )

To be fair, I don’t think most games have traditionally been designed for speedrunning. It’s a separate challenge people have developed, as a different way to experience the game.

I suspect the games that take the most turns to win are the huge ancient ones like Warp, where a lot of time is spent navigating a giant map (since navigation can’t generally be “shortcut” by knowing the puzzle solution in advance).

Apparently Blue Lacuna by Aaron A. Reed is known to be insane in size, as it’s a full-on novel rendered as a masterwork of interactive fiction.

I haven’t played it myself (I really should tackle my to-play list soon…) but one of the links said “Read as an E-Book” and it indicated 768 pages or something.

However, I couldn’t find a full walkthrough to count the turns with. The closest was someone posting about how to max out the secrets, but skipped large chunks of the game while explaining.

Suffice to say, the turn count is probably insane.

However, as others have said: If you’re just looking on for a way to ballpark where your game stands, then it might be hard to find actual stats.

If you’re still worried that your game will be too long, then—my brother in TADS—you’re probably fine. There have been short games that seem to go on forever because one of the puzzles is near-impossible to figure out (I’m looking at you, Lunatix, and your cursed cup puzzle). On the other side, there have been games that chase after Iliad by Homer, but kept every moment engaging, so time flew by.

Or, you have games like the ones I’m still working on, where there’s a lot of moving parts so the turn count might be high, but the decisions and commands actually felt really short, in reality.

Also, if you’re still worried about the extended prose sections: There’s absolutely an audience for that. Trust me.

Sorry I couldn’t find actual numbers, for you though. I’m kinda curious now, too, lol.

I may not have been clear… I’m not in any way trying to turn IF into speed-running, or trying to say more turns is better. I just wondered if anyone knew the stats: are there games that take 1000+ turns to complete, even if you knew all the info beforehand? I’m aware that any real playing experience would require many more turns to figure out the info from what you observe… is Warp considered one of the biggest games then?

Honestly I don’t think Blue Lacuna is going to be in the running for the longest speedrun. There’s a lot of text, but also a lot of text per move, compared to older games where you’d spend dozens and dozens of turns just entering movement commands with no real feedback. Similarly Hadean Lands requires several runthroughs to win, but lets you abstract repetitive commands when doing this, so I suspect it also doesn’t have the highest turn count.

There’s a massive AIF work that’s somewhat famous for exposing issues in the Inform 7 compiler through the sheer scale of the project, pushing memory limits that nobody had even come close to before. But if I remember correctly, a lot of it is choice-based combat.

is Warp considered one of the biggest games then? 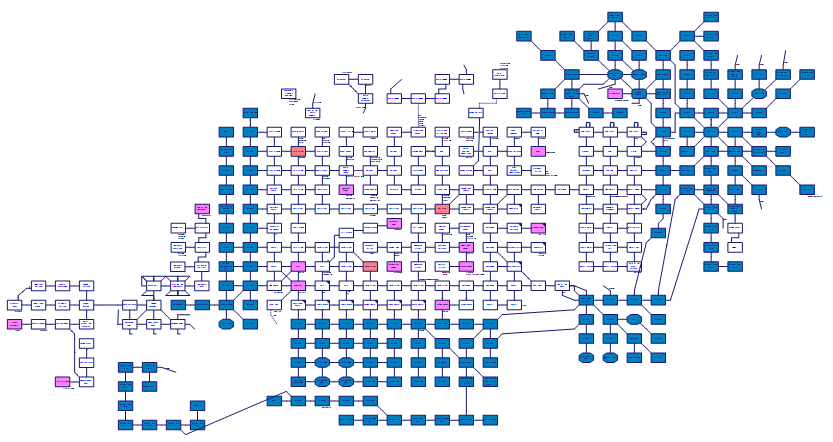 The first time I played Warp, the map was so large I got too exhausted to solve any puzzles before bowing out. The second time, there was still a lot to fill in, but as I got more familiar with the geography, the map “felt” smaller and smaller. I could rapidly type of a string of E.E.E.E.E.N.N. (etc) to go from location to location, so it was as if the world had compressed once I was familiar enough with it.

There are a lot of old mainframe games with enormous maps (and some of the later home computer games used it as a selling point) but the impression I get is that Warp requires you to run back and forth across the map a lot—to the point that it actually has an in-game macro language to automate movement, with conditionals and loops. So in terms of sheer number of moves required to win, Warp is my bet. Even if it’s not the biggest map in terms of sheer scale, I think it requires the most traversal of it.

You can read Jason Dyer’s full runthrough here; his blog is the main way I experience old mainframe games, since I don’t have the patience for it myself.

is Warp considered one of the biggest games then?

So, I just checked the ifdb: There doesn’t seem to be a walkthrough for Warp either. Interesting that it was made to run on a database, though, ahahaha.

However, it advertises 49 treasures to uncover, and a hidden box to store them in, so the goal count could be listed at 50, but the average number of turns to find them is unknown, if it’s your second playthrough.

Honestly I don’t think Blue Lacuna is going to be in the running for the longest speedrun. There’s a lot of text, but also a lot of text per move, compared to older games where you’d spend dozens and dozens of turns just entering movement commands with no real feedback. Similarly Hadean Lands requires several runthroughs to win, but lets you abstract repetitive commands when doing this, so I suspect it also doesn’t have the highest turn count.

Ohhhhh… Interesting! I’m even more interested in playing it now!

There’s a massive AIF work that’s somewhat famous for exposing issues in the Inform 7 compiler through the sheer scale of the project, pushing memory limits that nobody had even come close to before. But if I remember correctly, a lot of it is choice-based combat.

Yoooooooo!!! Look at the size of that!!

My recollection is that there’s an RPG-style combat system, where you have a random chance of encountering an enemy while taking certain actions and then choose from an “attack, use item, flee, etc” menu each turn. And part of why it’s so huge is because people have invented hundreds and hundreds of these enemies. It’s not that every possible state has been written by hand, but that there are a lot of tables defining enemies and their stats.

But one, a speedrun won’t encounter every single possible random enemy (only whichever ones the dice decide you run into as you follow the shortest path from start to end), and two, I’m not sure selecting the menu options for the combat system counts as a “move” here.

Honestly I don’t think Blue Lacuna is going to be in the running for the longest speedrun. There’s a lot of text, but also a lot of text per move

Also, even though the source code of Blue Lacuna is long, you wouldn’t necessarily experience all of its largeness on a single playthrough.

In other words, not all of the code in Blue Lacuna ends up translating to things you would definitely see as game length.