So at @DeusIrae 's request after we batted around some thoughts on adapting IF in this thread, here is a list of games from the App Store that tackle parser-type IF in touchable format-- some with graphics, some not. I’ve included App store links because I played all these on iPad. Ten seems like a good number to start with:

A Dark Room and its prequel, The Ensign
Very successful adaptation, and obviously these made some serious cash, as ADR was the best-selling game on the App store for quite a while after it came out. Simple graphics including an extensive ASCII map for a ver large world. Not particularly parser-ish, but that’s why it’s an adaptation.
This one starts out as an idle clicker game, but stick with it until you get a compass and then everything gets very interesting.

Device 6
This had some very unique ways of exploring text interactivity. A bit more parser-ish, with parser-like puzzling.

unmemory
This feels much more parsery, with traditional puzzles and a very parser-like setup of house exploration toward the end.

Blackbar
A really interesting text setup that has you filling in words, so there is typing. Excellent story, feels very parser-ish. Same author also did:

Grayout
Which explores special effects with text and also feels quite parser-ish.

Horror in the Darkness
This is very parser-like. Basic IF setup, with buttons for actions and objects. I think this kind of thing could be done a lot better, but it’s worth looking at.

Open Sorcery
This is Twine, but it has a real parser feel to it, I think.

Finally, a shout-out to The Bones of Rosalinda from this year’s Spring Thing, which feels extremely parser-ish to me even though it’s Twine.

There are many more, but these are the most successful ones, I think, and a good place to start thinking about adapting parser IF to reach a wider audience.

@robinjohnson 's Detectiveland and some (but not all) others of his Gruescript/Versificator games. From what I’ve read here, Gruescript doesn’t offer a parser, technically… but you wouldn’t know it from, say, Gruesome which absolutely is the sort of thing we mean when we say parser-based IF (and isn’t especially touchscreen-friendly, or at least not moreso than parser-based IF in general).

TextureWriter games are in this vein, too (though personally I find the drag-and-drop-centered UI to be cruel and unusual).

16 Ways to Kill a Vampire at McDonalds feels kind of parser-ish, having a lot of thing-manipulation and world-state-maintenance. Uncoincidentally, it’s also from the author of Open Sorcery, Abigail Corfman.

Some remastered Magnetic Scrolls games are available for Android and iOS. See https://www.magneticscrolls.com/

Would recommend Jinxter. Disclaimer: I am one of the developers.

We commissioned a few extra nice pictures as well as improved many originals. You can play the game (almost) without typing. There’s an inventory sidebar, a clickable map and word completion as well as command “suggestions”. 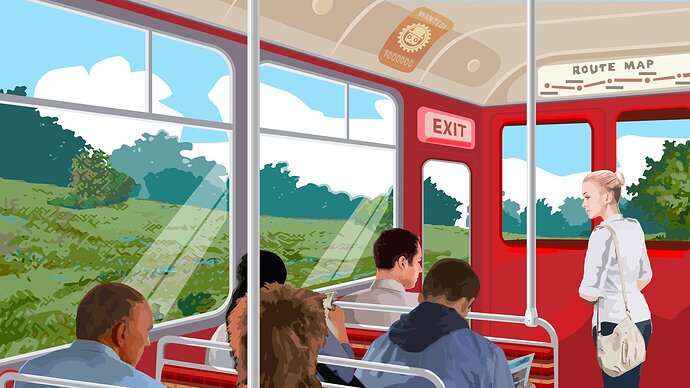 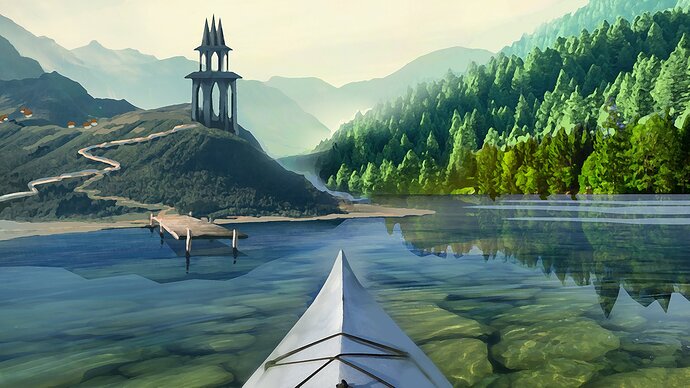 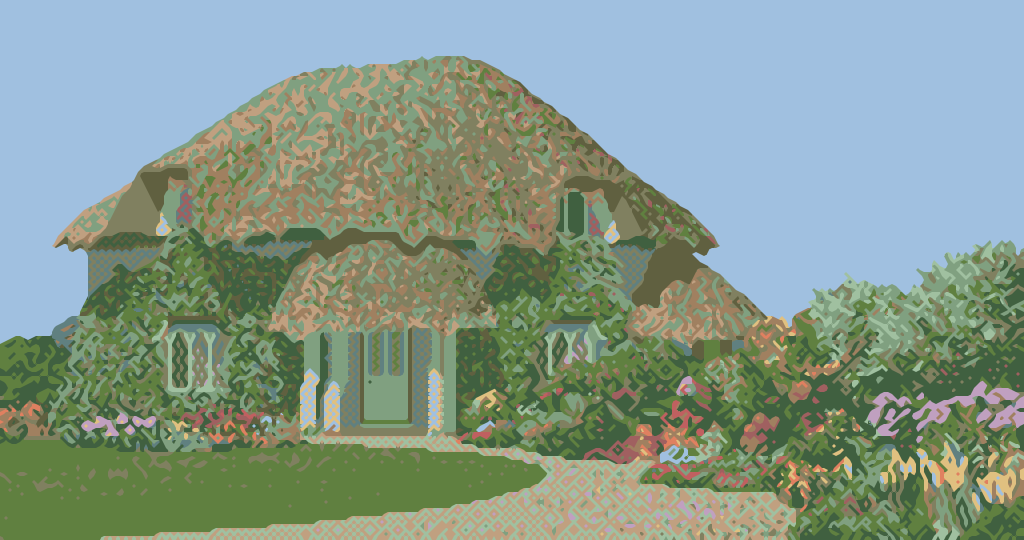 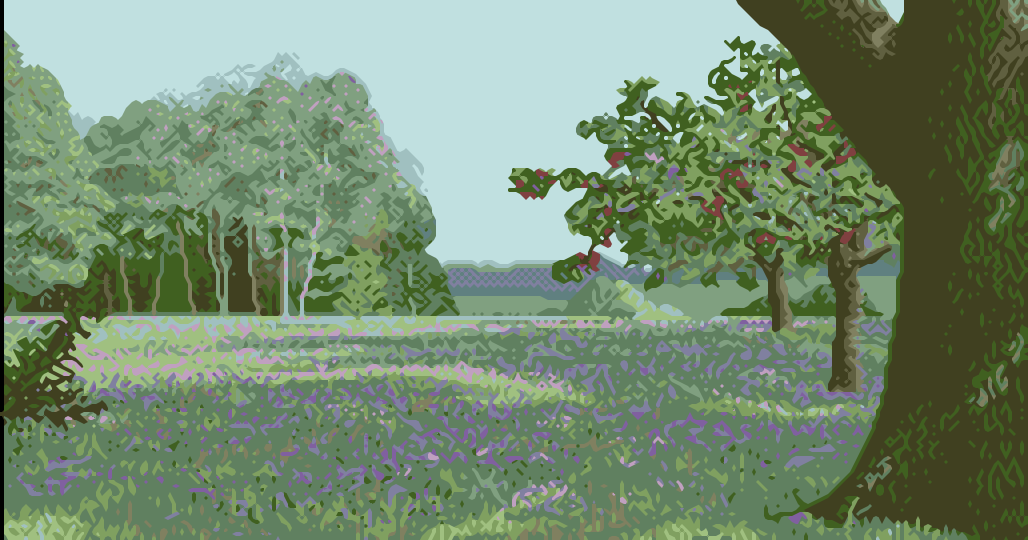 Add to this list: G30, Alt-Frequencies, Arrog, Vitriol, Song of Bloom. I’m sure I’ve played others.

These games are very much about text – not just as an abstract, but the physicality of words and letters and the (virtual) printed page. (Or, in the case of Alt-Frequencies, the spoken word.) You could reasonably thumbnail the category as “the text is the interface”.

But I don’t think of them as parser-like. There’s no particular connection to the old Adventure-English framing of commands. Some (as you describe) have an abstraction of verbs and nouns, but that seems like a different category than Blackbar or Device 6.

But I don’t think of them as parser-like .

For anyone thinking about adapting parser IF, I think there are some interesting models in these games, although none of them do exactly what I think of when I envision a good adaptation, for which there are a very few good examples.

ETA: Some of these games, like A Dark Room, are actual adaptations of parser games. Others are obvious experiments with making parser-like text games. It’s clear that some people are testing the waters, with some success.

Thanks for posting this! Lots of stuff to dig into, since of this list I think I’ve only played A Dark Room (I’ve had Open Sorcery on my list to check out for quite some time, but I keep forgetting, so I appreciate the reminder!)

Just out of curiosity, what would you suggest as search criteria if trying to find one of these parser-like text games for Android or iOS?

I play often this kind of games in my tablet. I have currently more than 150 games for Android wich rest in my IF apk categorie.
This folder contains Choice Games, Visual novels, some IF remakes, IF released in apk format, and some phone emulator games. There is a lot of differences between them. The similar characteristic is that all are packed in an apk file.

The search is hard, because I’m not interested in visual novels so much, and most searches for terms like “text based games” turn up a lot of things like visual novels. There’s a “50 Games Like…” site that’s been marginally useful for searches like “games like A Dark Room”.
I think the most useful search term (which still isn’t that useful) is “interactive fiction”. I have occasionally gotten recommendations from the App store, which has figured out that I like word games. I think that’s how I originally found Open Sorcery.

All of @robinjohnson 's work should be included in this thread.

I do not have a good search term for this stuff. (I keep them in a folder called “Story Devices” but nobody else uses that term!)

I agree that “interactive fiction” works best. It’s not a great search term. You’ll have to sort through a mix of these things, visual novels, lost-phone games, RPGs, dating sims, and what we call IF. But at least this stuff will be in there.

I am not familiar with any of the games mentioned so far, so not 100% sure what parser-ish means to anyone else, but there was an early Android adventure game called Tiny Text Adventure, and a slightly newer kickstarted sequel called Tiny Text Adventure 2, both available with open source code, that I felt was very much like playing a parser-based game, even if it is all clicking links like some Twine game. There is a world simulation behind the scenes like in typical parser-based games, and you tap on objects and verbs to interact with things, rather than just picking from lists of pre-programmed choices. You walk around to different locations and can pick up and drop objects and try to use them with different verbs (often only to be told that you can’t… just like in parser-based games). 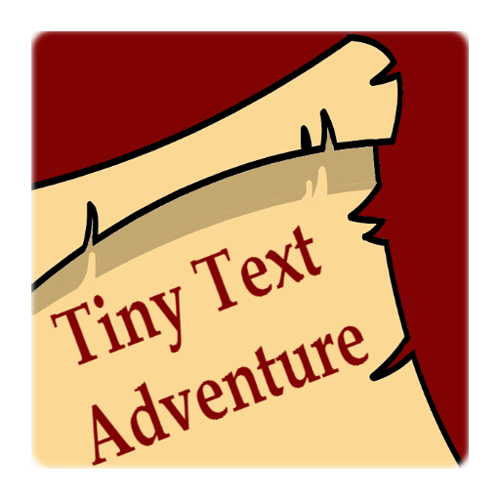 Have a tiny adventure - in your mind! Then play this game...

The “Horror in…” games are actually a series. Besides Horror in the Darkness there’s also Horror in the Pacific, Horror at Innsport and Madness at Hobbsgate, plus three CYOA games.

I finished those games some years ago.

There are two newer improved games:
Echoes of Cxcothl
The nameless grave

Knights of San Francisco is a mobile IF game by an IFComp author.

For mobile there’s also Seedship and some of John Ayliff’s other games, as well as Voyageur (whose mobile versions doesn’t seem to be maintained anymore unfortunately).

Also there’s the Lone Wolf Saga android app. I think there are a lot of other gamebook-type things out there - Choice of Games, Lifeline, Tin Man Games, etc. but those probably don’t belong in this topic.

I don’t know if these are “parser-like” enough for this topic, but they do have more mechanics than, say, most visual novels.

Eamon CS is a version of Eamon that can be played on Android.

PataNoir is an IFComp game from 2011 and it’s available as both Android and iOS app.

These two are not parser-ish or parser-like, but they are real parser games instead.