After a long delay (my fault), Lectrote 1.4.0 is up with full TADS support. Saving the game is a bit slow, but it works now. Thanks as usual to Dannii for the interpreter support.

I just tried Worlds Apart in Lectrote 1.4. It starts up fine, but the status bar isn’t working properly. It should say “Ocean Floor” on the left and “?” on the right at the start of the game, but it’s just blank, and seems to stay blank as I play. 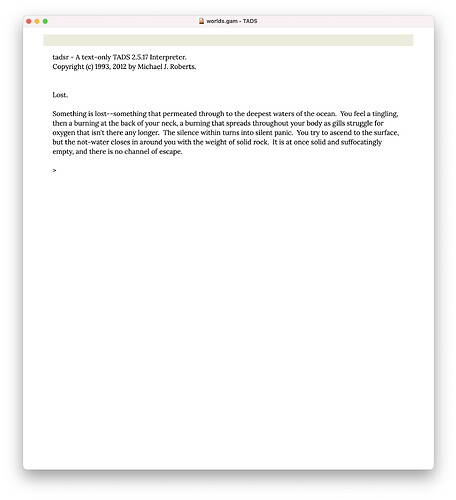 Here’s a screenshot from Spatterlight 0.77 showing what I’d expected: 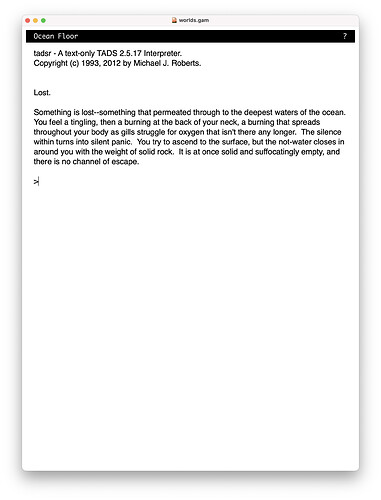 Hmm, I can’t reproduce, it works for me in Lectrote 1.4 on Windows.

Working here too on Mac.

I think Lectrote has the potential to be the best means of playing IF as a blind person using a screen reader.
I’m blind myself, and use NVDA a free Windows screen reader, so for what it’s worth, here’s some notes on what I found. I tested Z-Machine, TADS and Glulxe games.
Z-Machine games work the best. The text is displayed as a standard webpage, so I can read it the same way as any other page. Pressing enter after a command causes NVDA to read the newly displayed text as I would expect, however I wish it didn’t say “edit” after reading it.
Unfortunately, when cursoring through help menus, NVDA doesn’t read the currently selected menu item, instead just saying edit.
For some reason, when loading a Glulxe game with the default Quixe interpreter I was unable to read any game text. Setting the interpreter to Glulxe fixed this and it behaved similar to the Z-Machine interpreter, with the same issues as outlined above.
I couldn’t read any text in TADS games.
So that about wraps it up. As I said, this has amazing potential to be the best way of playing these games. Currently on Windows, I and other blind people use the old way of different interpreters for each game format, and an add-on for NVDA is required to read game text. Currently the add-on is buried in an obscure Github repo. If everything in Lectrote was accessible with NVDA, no extra add-ons would be necessary.
Hope this helps, and I’m happy to provide extra feedback if required.

I ran into a small issue with Lectrote (current version 1.4.0, running on Windows 8.1).

I often like to use a large zoom (setting 4 in Lectrote, for example) when playing games, and in combination with a relatively narrow window, this can result in the input field not getting an adequate width (and/or position) when the player is being asked a question.

I noticed this when I completed some PunyJam games recently (z3, but the issue can also turn up on other games). When they presented the final prompt message (“Would you like to RESTART, RESTORE or QUIT?”), I could not see what I was typing in response.

I experimented a little with varying window widths, and saw that the visible width of the input field was narrowed/cut off, sometimes so that I could not see it at all (but when I typed something and hit Enter, it would display the whole input on the next line), sometimes so that it only showed a few letters. The same thing happens with the question “Are you sure you want to quit?” when you quit a game (but to see that, the window has to be even narrower, so that won’t happen for most players).

See attached screenshots, where I typed “1234” and “12” in response (just to show the varying width).

Of course, it’s not a big deal at all, but hopefully it’s easily fixable. 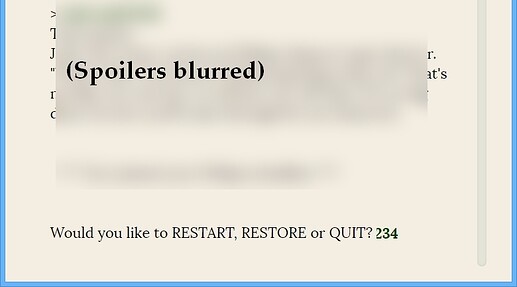 Thanks. The zoom level definitely messes with text layout in a couple of ways, but I haven’t figured out how yet.

Having just tried Lectrote again, I need to correct what I said about glulxe games.
It seems that the only game I can’t access with a screen reader is Counterfeit monkey. I tried a handful of others, namely Blue Lacuna, Kerkerkruip and The Wizard Sniffer, and all behave as expected. With counterfeit Monkey I can’t read any of the game’s text or even access the edit box at the bottom to type in commands. The game loads correctly as far as I’m aware.
I can play the game just fine when using Windows Glulxe. It’s just when using Lectrote I can’t. I’ve tried it with all the glulxe interpreters that Lectrote comes with.

This is probably not very helpful, but here on my Mac with Big Sur, VoiceOver works fine in Counterfeit Monkey with Lectrote 1.4.0, so this might be an NVDA problem.

Has anybody tried Lectrote with the newest Jaws version as their screen reader? The older Jaws worked fine, but with the new version, every time I enter a command and press return, Jaws jumps to the top of the page and you need to bring the cursor back down. I don’t think this is a problem with Lectrote, but something in Jaws has changed.

Also, for me every Glulx game works except “The Weight of a Soul”, where I can only read the title and nothing more for some reason.

I have the most recent version of ZoomText with speech. I had to stop using it since it doesn’t work well with the new web browsers. It is a know issue. Tech support doesn’t know when ZoomText will be fixed.