The reason I ask is that in the new IFWiki events database we have separate event types for “competition” and “jam” (the others being “conference” and “meeting”). Maybe we didn’t get it quite right. 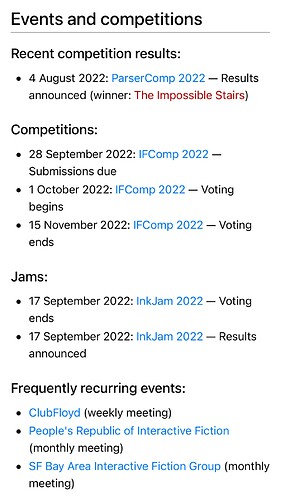 Without voting authors do not get the “Thrill of competition and the agony of defeat.” No bragging rights. I guess voting and ranking are up to the organizers and the venue that hosts jam/comp. Itch.io jams do not have to be ranked, it is a check box.

Well, it lacks ECTOCOMP, that I will announce in a few days

In my view, one of the main or typical distinctions is that jams focus on creating the games during the event, which is why they often ask the participants to include a topic or theme which is kept secret before the start.

That can go hand in hand with being low-stakes and relaxed, but not necessarily. There are events called “jams” which are relatively high-stakes, like the “Epic MegaJam”, with voting by a panel of judges, and hardware and software prizes.

In the IF community, the closest equivalent to jams would traditionally be “Minicomps” (including Speed-IF and the time-limited form of EctoComp), as we often called them before the “game jam” term came up in the wider Indie game development scene and gained influence.

In contrast to jams, competitions (in my understanding of the term as mostly used in the IF community) typically impose no time limit – apart from the final deadline, of course. So, participants can start whenever they want.
(Consequently, one expects comp games to be polished, whereas jam games are usually cut some slack in that regard. But that’s a side effect rather than a defining feature.)

The various Adventuron and TALP game jams, hosted on itch, all had voting. As mentioned above, the main difference between a jam and a competition is that a jam usually specifies that the game is created entirely in the jam timeframe.

but we will fix it. Let’s wait to the official announcement.

This makes some sense now. Voting makes an event a competition and a creation time limit makes it a jam. Something with both those features could be called either. Maybe something lacking either would also be a jam!

In the IF community, the closest equivalent to jams would traditionally be “Minicomps” (including Speed-IF and the time-limited form of EctoComp), as we often called them before the “game jam” term came up in the wider Indie game development scene and gained influence.

On IFWiki there’s a whole separate category for Minicomps, one that the founding fathers considered merging into the main Competitions category.

And while we’re on the subject of competition categories, I kinda want to get rid of Category:Minicomp. It’s a bit of a judgment call if a comp is a minicomp or not, and I’m not sure it helps anyone to have it as a separate category anyway. – David Welbourn00:53, 31 January 2008 (PST)

Maybe the same could be said for having a separate category for jams now.

Maybe the same could be said for having a separate category for jams now.

So, are you saying we could just call them all competitions (for the purposes of event type, anyway)?

I don’t know whether I have a fully formed opinion on how to proceed with IFWiki.

Having fine-grained categories is generally nice because it’s hard to know conclusively beforehand what people (writers, players, IF historians) might use them for.

And removing fine-grained categories feels a bit as if one is unnecessarily removing information. (As if one were in a library and took the record cards from several different boxes and threw them together into a bigger box.)

On the other hand, in cases where a specific category doesn’t serve much of a purpose, and just leads to miscategorizations, or to people/potential contributors agonizing over whether something falls into category A, B, or C, then one might as well leave it out from now on, and/or discourage people from using it in the future.

As a critic and historian:

As an event organizer or IFWiki contributor:

Maybe more people will chime in with possible use cases, so we can get a picture of what the categories can help to accomplish.

It would complicate matters to let an event be called a jam and a competition though.

I think a “jam” is what the IF community calls “speed-IF” where the challenge is to create a specific type of work in a timeframe. These may be judged at the end, so it’s somewhat of a competition?

One issue is itch.io runs “jams” but doesn’t put any kind of mechanical parameters on entries (sort of by necessity) so site creators are free to enter any game on the site to any jam no matter when it was created or how long it’s existed. If you want to run any type of competition on itch, it’s called a “jam”. Technically what itch considers a “jam” is closer to a “showcase” of games potentially around a theme and more of a promotional tool, although many jam-runners do tend to run “make x game in x amount of time on this theme” and creators usually are like “I already have an existing x game on this theme” and enter it for visibility. I guess itch assumes runners will police their own entries.

You could group jam/minicomp/speed-IF together potentially with the definition “timed creation competitions”. “Jam” is a more pleasing term.

As opposed to “competition/showcase festival” (IFComp is a comp, Spring Thing is more of a showcase festival where judging is less the focus, EctoComp has a jam component) and pure “awards”.

ParserComp has no time limit for game development. I just may not have been released previously.

Is there any real need for the categories to be separate? Can’ t it just be “Competitions & Jams”?

I think a competition is competitive (hence the name). It has rules, rating by the general public (or judging by a panel), allocation of winners and losers, and potentially prizes.

I think a jam is non-competitive. It may still have rules, but there is no rating/judging, hence no winners and losers and no prizes. Jams tend to be cooperative, rather than competitive and games may be unfinished or unpolished.

I can’t recall any IF competitions that ever called themselves jams, apart from the Text Adventure Literacy Jams, but they were clearly competitions. The fact that competitions may use itch’s jam hosting platform is irrelevant.

As others have said, is there any point trying to make a distinction at all? Just lump them all in together as competitions.and game jams.

Is there any real need for the categories to be separate? Can’ t it just be “Competitions & Jams”?

Yeah, this seems like the best approach to me - rather than try to impose a taxonomy on unruly reality and hope users figure it out and there aren’t too many edge cases, for most people interested in these kind of events a more useful system would be to provide a comprehensive list, and then document the individual rules and approaches on each event’s respective page.