(I know there’s a whole choice-based IF board but there’s so much info there I don’t know where to begin. And since I know I want to use Dialog it probably makes a lot of the considerations in those discussions less relevant. Will happily take a pointer to a recently-curated overview of these planning tools, though.)

As another play-with-Dialog project, I am interested in building a story that is primarily/exclusively choice-driven. (My one-branch implementation of Bob and Doug MacKenzie’s post-apocalyptic film The Beer Hunter last night was a huge success.)

I did a lot of choice-based dialogue-driven writing in the 2000s. Back then I did it all in a text editor with a straightforward, purpose-built scripting language. When I was really in the groove I think I was as good or better from a speed and complexity-managing standpoint than people who were using the emerging GUI organizational/mapping tools of the time, but A. I am no longer in that groove, B. I’m pretty sure those tools have come a long way since then, and C. I’d like to collaborate with someone who I think is less interested in writing directly in VS Code.

Things I care significantly about:

Things I care some about:

Things I don’t care about:

Git code commits are the best we have, because you can connect push triggers to a script (or even a cloud virtual machine) that compiles and tests the game. So on every code update you can get the z6 debug/release files and run a transcript through frotz to check that the game works. That’s all for free and easy to setup. IMO it’s worth learning the markup language and git.

There are other non-Dialog IF tools that might make it easier to collaborate and visualize your code, but if you used them, you would have to “write the full logic in a non-Dialog system” which you said you don’t want to do.

If a graphical view is important to you or your collaborator(s), then Dialog is probably not the right tool for this job.

(If you’re just looking for a way to avoid teaching your collaborator(s) Git, you might be able to get away with a shared folder like Dropbox, if you can manage to avoid overwriting each other’s work.)

I think maybe I made this too difficult by saying too much. If I rephrase my question more naively, as “I would like to find a visual tool to help choice-based story planning now. I would want to choose my code/publishing platform at some hazy future date*,” does that change anybody’s answer?

For instance, Storyboard almost fits the bill. It’s easy to use and although it doesn’t deal with simultaneous collaboration it’s fine for a “your turn now, okay click save, okay I’ll refresh, okay good” back-and-forth. The main two problems for my workflow show up in this test story:

And trizbort.io is actually a little nicer than I would have thought it would be. It’s not purpose-built for this, but unlike Storyboard it’s pretty easy to get all of the node and choice text on the screen: 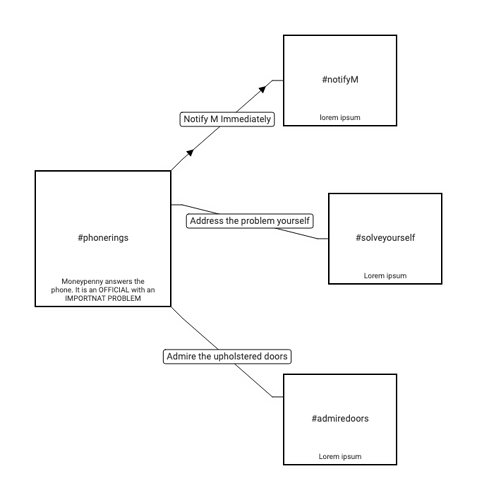 This is not terrible! The TADS code export is even pretty human-readable, but it omits the choice text which is a major downer.

Aside from losing the choice text, I’d be totally satisfied fixing the rest of the dumb stuff by hand. Maybe that’s a feature request…

@dfabulich - I understand that there is no Dialog aware/sensitive/compatible nodey-pathy-planny tool. Let’s say that my aversion to writing logic twice is at worst a “care some about.” But let’s also say that I’m fine with just naming an always-true choice “ONLY IF HAVE REPELLENT AND MET SEALS AND BEFRIENDED SEALS - Go swimming with your shark repellent and new seal friends” in the mapper and dealing with it later.

Your point about using a repo to make it easier to collaborate during the mapping phase is well taken.

@Oreolek - Thanks for the pointers to the general-purpose whiteboards, those may be interesting options as well.

* - but it's gonna be dialog, shhh don't tell anybody