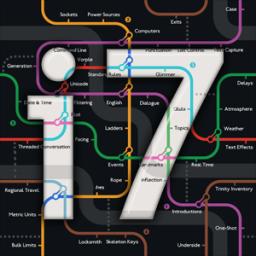 Check out the Inform 7 community on Discord - hang out with 23 other members and enjoy free voice and text chat.

Found one discussion about Discord in this site before, dunno from how long ago. Someone asked for a link but nobody had information about such things.

I came here from Reddit, with this link. There are some people already on the server, but we need to breathe some life in there to get the Fire of Text going on, if you know what I mean.
I’m up for the task, and I hope that others are as well <3

You really shouldn’t use Discord for anything, much less interactive fiction discussion. It’s extremely inaccessible and has had a bad history with screen readers. I strongly recommend against it’s use, and even more so in a community that (I assume) would have many more visually disabled users.

While normally, or at least when I used to use Discord, I would give a very long and passionate wall of text about why I hate it I’m about to go to bed, so sorry if this comes across harshly or is poorly written.

Umm…I didn’t know blind users can use Inform 7?
Or have the chance to, like, use this forum much better than Discord?
I don’t have any experience about blind tools on computers anyhow.

I have used Discord a lot and I think it’s a good tool (for people who can see?) no matter are you talking there about online games, space science, using it to roleplay with others or talk about making text games.
I have a bright trust that Discord could be as a tool as good as this forum, or a good support network to it - if we get it active.
Some people have already joined in there.

There are also lots of bots in Discord. Chances are there is a bot to the blind folks…

I’m not visually impaired, so take what I say with a grain of salt.

I know it’s totally possible to use Inform with a screen reader.

Regarding Discord, I know someone who uses a screen reader and quite likes Discord. He wrote games using Inform 7 and even managed a whole team with Discord.

So I don’t know. Maybe it really improved, or maybe it depends on the screen reader.

I know it’s totally possible to use Inform with a screen reader.

Text adventures are actually one of the better types of games for the visually-impaired if they have text to speech options!

I guess so. I know for certain that the iOS app is still unusable, and I’ve never had any success with the desktop app.

maybe it depends on the screen reader.

I didn’t know blind users can use Inform 7

Definitely. Text based games like interactive fiction or MUDs are great for screenreaders.

Or have the chance to, like, use this forum much better than Discord?

Discourse is quite well made, and I know the devs care about accessibility so buttons and controls are well labeled. It’s simple to navigate and use with a screenreader.

There are also lots of bots in Discord. Chances are there is a bot to the blind folks…

It’s possible to create a bridge between an IRC server and a Discord server, but it’s very tedious and isn’t a good experience. I wouldn’t recommend it.

In the past Discord has responded negatively in several ways to improving accessibility on multiple occasions. Because of this, I don’t trust it to be a good platform for visually disabled users. I also personally don’t believe it’s a good implementation of synchronous chat regardless of accessibility issues. There are many other better apps out there. (Those last two sentences are only my opinion, of course

Hey, Perry, could you test and try Euphoria?

This room of interactive fiction came in disuse some time ago, if it is a more accessible one, maybe it deserves to be used.

Anyway, people always will have this forum to ask questions, I mean, it is the better place to get help about.

It’s certainly not bad, but not good either. It’s usable with a bit of general weirdness. The developers did not add any ARIA attributes which makes it harder for a screenreader to guess what something does. For example, it’s hard to interact with the little “7 more” expansion button because it’s not an HTML button and does not have any attributes saying it acts like one. Because development on the project has stalled I would guess it’s not going to change—the last commit was July, 2018.

For real time chat alternatives: I’m partial to IRC but it’s not user friendly, and can be difficult to set up without some know-how. I’ve used rocket.chat and it’s a nice experience, but I don’t believe it’s screen reader experience is perfect either. I do know though that you can connect via a good IRC bridge so that’s not too much of an issue. Ditto for Slack—the only issue there is pricing for unlimited message history.

I personally am a fan of Discourse, and I think it’s probably the best format for getting help with IF as far as I can tell. If I had to pick a non-IRC alternative for synchronous chat then I would say rocket.chat or Slack would be best. I don’t know much about Euphoria but it seems like development has stalled.

Is this Discord server still around? The invite link says it’s expired or invalid.

Check out the Inform 7 community on Discord - hang out with 35 other members and enjoy free voice and text chat.

It’s expired again. It should probably be a permanent invite link if it’s going to be posted here.

Check out the Inform 7 community on Discord - hang out with 36 other members and enjoy free voice and text chat.

Check out the Inform 7 community on Discord - hang out with 66 other members and enjoy free voice and text chat.

I hope it never expires now - I checked the options for it.
A shame I can’t edit the link on my first post.