Had a quick look at Infinite Adventure, and wondering if it is supposed to be like this? Given the aesthetic and the nature of the related game in the comp, it seems like it could be deliberate, but it doesn’t match the cover art and the only review I’ve found doesn’t mention it.

Do I need to download a virtual head cleaner diskette for my DOSBox?

2 Likes
And Then You Come to a House Not Unlike the Previous One & Infinite Adventure post infinitum
patrick_mooney (Patrick Mooney) October 9, 2021, 5:43pm #2

You’re right that it doesn’t match the cover art. I assume it’s a bug? But it’s hard to tell because it’s consciously being coy about its origins, so maybe it’s a clever meta-puzzle of some kind.

In any case, the problem is continued on the first play screen. 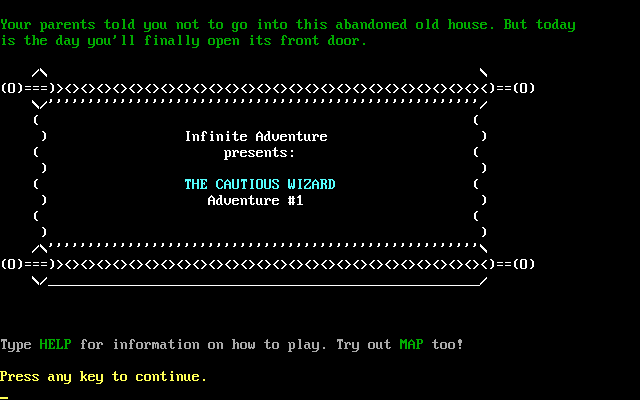 The differences in the actual title within the title screen are due to procedural text generation. 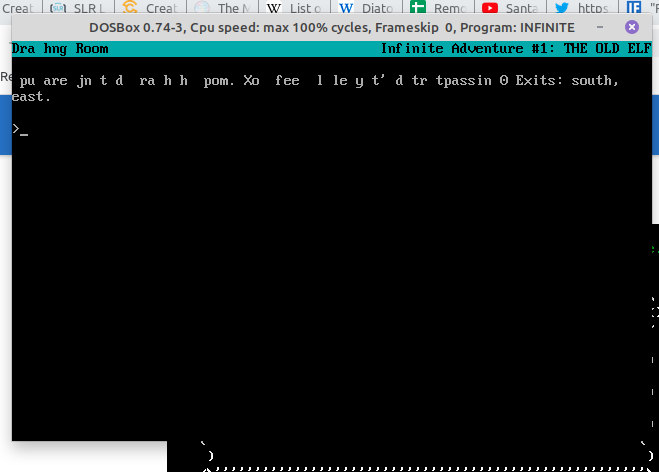 Despite his tragic and sensationalized death, this evening I was able to conduct a séance with Mr. Scotts via AOL Instant Messenger. He confirmed that the text of his game should indeed be legible and he suspected bugs were afoot. I explained to him the many, many different operating systems that have proliferated since his demise, and he suggested I test his game on some of them. He was particularly insistent on testing in OS/2, as he believed it to be the operating system of the future.

I quickly verified several OSes, including Windows 10 running DOSBox, Vista and XP (where the program runs natively), and in a virtual machine running FreeDOS. All were successful. I also tested the game using an old laptop with Ubuntu 14.04 and DOSBox 0.74, and it runs correctly there, too.

I suspect this might be some sort of weird DOSBox issue with non-Windows 64-bit systems (and maybe just 64-bit Linux). I talked with JTN about it and suggested to maybe run the Windows version of DOSBox via Wine. It was confirmed that Infinite Adventure worked correctly in this manner, using the DOSBox0.74-3-win32-installer.exe file.

I thanked JTN, and went to tell Mr. Scotts about my results and to thank him as well. But by then, he had set his status to Away, leaving only his parting message: “Happy INFINITE ADVENTURING!”

So I tracked the problem down to a specific, platform-dependent bug in DOSBox.

Knowing this gives a few more options for workarounds, but none of them are especially easy.

I’m not aware of any workaround for DOSBox on non-Intel processors, I’m afraid. Your best bet would probably be to find some other way to emulate DOS.

For Linux on 64-bit Intel processors:

Macs: dunno. Since I think all but very old and very new Macs have Intel processors, it ought to be possible to do something, but I don’t know any details.

'I tried this with Dosbox-X and it worked where Dosbox failed.

The second method (i386 DOSbox on x64 computer with multiarch) worked for me on Linux Mint 20.1!

Built my own DOSBox from source on OSX Mojave (10.14 on 64-bit Intel), and it indeed Just Works. Didn’t do anything special, just built with the default params:

What language runtime is this?

I’d be quite curious to see the source of Infinite Adventure. (I suggest plugging a modem into a Ouija board to facilitate the transfer.)

I tried this with Dosbox-X and it worked where Dosbox failed.

Aha, yes, looks like this fork came up with a more widely applicable fix (issue 119, commit 0b0baa0cc3). So this looks like an option for (at least some) non-Intel processors.

Dosbox-X also worked for me on macOS Big Sur 11.6.

@bjbest60 I wonder if it wouldn’t make sense to update the description on IFComp and IFDB to mention “DOSBox-X” instead of DOSBox.

This time, thanks to my clairvoyant’s advice of using the three of swords Tarot card as a mouse pad, I managed to contact A. Scotts through a haunted Prodigy bulletin board . He asked me to genuinely thank everyone here for the deep dive into the technical issues. He was also very, very relieved that he could pin the bug on DOSBox rather than his own code. He seemed like he wanted to say more, much more, but then his aura became corrupted, dissipating into a hiss of demodulated static.

I was then able to reach the Abort/Retry/Fail team, and they successfully updated the game’s IFComp blurb, so it now lists DOSBox as preferred for Windows and DOSBox-X as preferred for Mac and Linux.

So, to summarize, if you’d like to play Infinite Adventure:
Windows: DOSBox
Mac / Linux : DOSBox-X

(A fiction can be a difficult thing to maintain. Again, a genuine thanks, all.)

I got impatient and tried plugging a modem into my own Ouija board. And, to my surprise, it worked!

Now I have an enormous pile of interesting-looking strings.

Do the strings stand upright and dance when you play the flute?

Worse than that! They talk to me, like familiar NPCs…

Hah! I was looking for a name for my chamber-music quartet. You think “The Talking Strings” is already taken?

I just got access to a new MacBook Pro with “M1” Apple Silicon (ARM), and I’m sad to say that Infinite Adventure has corrupted text even in DosBox-X on my new machine.

@JTN I don’t really understand the scope of this issue, but I guess I’d want/need to file a bug on DosBox-X. Do you have any idea of how I’d describe/file the bug above and beyond “this is an issue in Infinite Adventure”?