Hmm, seems rating option is gone now from game pages at IFDB. Or at least I can’t find it anymore on my mobile. Now there is only “Write a review” option left. Does that mean rating-only is not welcomed anymore at IFDB?

Also, game pages look really strange now (on mobile at least). Listing starts with files section and game title comes after that. Also, I can’t see link to My Profile unless I turn mobile in horizontal position. Entire right column is gone now. How is this better than the old version?

This is how it looks now on mobile… 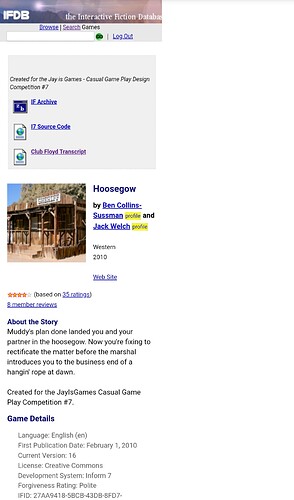 (This definitely has nothing to do with content warnings!)

IFDB has had an “iPhone mode” for some time that attempts to make IFDB mobile friendlier. It does make things simpler and easier to touch in a single column, but it hides a bunch of stuff, too, which we hoped to fix in the future. It seemed like it was worth the tradeoff; iPhone users had been using it for years. We rolled out a change today that extends “iPhone mode” to Android devices as well.

If you provide me more information, I may be able to reproduce the issue and fix it. (That’s definitely not how it looks on my Android phone.) Can you tell me which Android device are you using? Is it a phone or a tablet? What brand and model number? What does google say your “user agent” is when you go here? https://www.google.com/search?q=what’s+my+user+agent

In the meantime, you can opt out of this behavior by selecting (EDIT) this stylesheet: https://ifdb.org/styles?set=48, which just disables mobile mode and makes IFDB act the way it used to.

EDIT: In PM, Edo clarified that the browser didn’t start off zoomed like that, but the zoom demonstrated the missing right rail.

I sent you all the details in PM.

let’s open ANOTHER thread on ifdb improvement, this time on mobile optimisation…

I have a Moto G Android that I use as a backup to my regular network.

Games and their reviews display well. When I select to write a review for a game it automatically zooms the display forcing me to go horizontal rather than vertical.

I didn’t see an option to rate the game in either mode but my vision is poor.

For comparison, Google Analytics says that choiceofgames.com welcomed 126 visitors from IFDB in February 2021. In February 2020, before we sent review copies to Mathbrush, there were 166 visitors.

Hanon is right: appearing on the IFDB home page is not an effective promotional tool.

(yes this has nothing to do with content warnings, split away into some “Is IFDB an effective promotional venue?” thread, whoever wishes to)

For decades, television ratings have steadily declined year-over-year across the board. (Forty years ago even terrible network programming would deliver a double-digit percentage of the viewing audience. Today, almost no program delivers even one percent.)

Point taken that Mathbrush reviews aren’t blowing the doors off for lead conversion, but with no other data points (and no I’m not asking you to conduct a public marketing audit) a decline doesn’t mean IFDB is an ineffective promotional venue.

Point taken that Mathbrush reviews aren’t blowing the doors off for lead conversion, but with no other data points (and no I’m not asking you to conduct a public marketing audit) a decline doesn’t mean IFDB is an ineffective promotional venue.

IFDB is a database that is slightly more public-friendly for general search than IFArchive is. While it’s a great landing spot for specific games or type of games people search for, I don’t think IFDB itself is an effective frontend for promotion specifically because the front page just shows latest updates. I don’t believe people go there to window-shop for what’s new unless they know a specific game or game type they are searching for. I’ve always considered the “new on IFDB” list essentially just a way to immediately verify your review or new entry got posted since stuff drops off so quickly.

I think it serves more as the link people follow to find a game after reading a review or hearing about it elsewhere.

In the past few months I have in effect been using both IFDB and this Forum as promotion channels for older games that deserve attention. And I too have come to realize that both channels are not that effective for that goal because new reviews fly by so quickly. Still, every game that I have put in the spotlight, for however short period of time, has gotten a few likes and sometimes some discussion. Good enough for me, but definitely not for real commercial promotion of a new game, I would think.

Given recent discussions I have a lot of concerns about the IFDB being repackaged and repurposed, I’ll admit these are possibly unfounded. But it’s existed for years just as it is, this gigantic, sometimes unwieldly and awkward but unique thing spanning a vast and varied community. Before the absence of anyone at the helm meant it felt like it was everyone’s, and now it belongs to specific people, and it’s hard for me not to speculate on the direction it might go and what things are going to look like a few years down the road.

I am wary in particular of it being used as a promotional tool, but I should make it clearer that I absolutely don’t think there’s any reason anything should change with Mathbrush’s reviews. We all know he would just keep reviewing regardless of anything else so I’m not questioning his motives at all.

From the numbers on people currently active and using the site at all it may not matter at all right now, but again I’m thinking ahead on this. Do the new owners feel any feedback on games should be accepted much like it would be in an app store or Steam or anywhere else, or only on certain games, or reviews meeting certain standards or what? Are monetized games held to a different standard? And the fate of mature games and reviews on mature games obviously was enough to spawn this entire thread.

More importantly, who is the judge of this? Popular mobile games have listings on the IFDB, a dev linking that from Twitter is going to be sending people in our direction. Is this good or bad? I know we have certain ideas about what an acceptable use of the site is coming from the fact it was a archive of free niche games for many many years, but that’s not the case anymore and I’m not sure newer game devs and their fans would understand it that way.

I’m mentioning this in part specifically because I know a listing of the Untold RPG was created, a couple of detailed reviews were posted and then linked for the writers to see in a discord of about a thousand fans. Then shortly later the reviews were deleted by the mods. Whatever the reasons for that, it’s not a great look as the IFDB’s introduction to a large and enthusiastic IF community that had a chance to be welcomed to our side of it.

But at the same time I can obviously see the potential downside of such a situation. There might really be a very limited number of people the IFDB is prepared to handle at a time when a couple hundred votes puts a game in the all time top 10. The mix of classic IF that’s venerable and beloved (but not enough for most people to click on some stars one time) and newer IF with mass appeal, commercial ones include, just makes for a strange mix, and I’m just wondering how it’s going to be handled when this early on there’s already clashes happening.

Having these huge grey areas just leaves room open for abuse on all sides and allegations and complaints, it’s just something it would be better to have clearly established policy on now. The IFTF has to realize that with the more hands on approach being taken they’ve potentially placed themselves in a position where they have to be aware of what all authors are doing anywhere on the internet, where reviewers are coming from and what their motivations are. That seems impossible, so I hope there’s a plan.

Before the absence of anyone at the helm meant it felt like it was everyone’s, and now it belongs to specific people

To be clear – there was always someone at the helm. Michael J. Roberts acted as a moderator for IFDB; he deleted game entries, reviews, and users as he saw fit. But he wasn’t part of a public committee so there was no discussion about it.

I don’t believe people go there to window-shop for what’s new unless they know a specific game or game type they are searching for.

Where do you go then if not there? For how big the interactive fiction community likes to think they are, there still aren’t very many good sites dedicated to game releases, from what I’ve seen.

ifarchive is great for archiving but absolutely horrible for looking for games, unless you’re specifically looking for games in a specific engine that is hosted on the archive. IFDB lets you search for topics (like horror) and not only mixes different engines together in search results but even lists games that must be purchased (like CoG games) or web-only games (like some of the ones by Ryan Veeder).

Basically I’m saying that you may be underestimating how effective IFDB is for helping people discover new games.

OK, the suggested stylesheet does help because it brings back all the functions to mobile version of IFDB site.

However, it still doesn’t look like the regular IFDB site. Everything from the right column of the site is just crambled above the game title. I guess it’s not that bad for games that have just few download options, but for games with more download options it looks really strange. For example, “Adventure” has more than 100 download options and now you have to scroll through all of them to reach the title of the game. Shouldn’t the game title be the first info visitor see when visiting game page?

Is it not possible to opt-out completely from this one column version and get back to regular, two column IFDB site on mobile?

OK, this stylesheet: https://ifdb.org/styles?set=48 does help because it brings back all the functions to mobile version of IFDB site.

Just a small warning to everyone: Clicking this link will change your stylesheet.

Is it not possible to opt-out completely from this one column version and get back to regular, two column IFDB site on mobile?

Have you tried viewing it in desktop mode in your mobile browser? It makes it go back to the normal two column display for me.

I have to change settings for that? Not sure I want to mess with phone settings just to have IFDB look normal again.

It’s not really messing with settings. It’s like two clicks (one to access the drop down menu and another to click the setting). Forced mobile mode on web sites sometimes removes features that you can only access on the desktop version, so most mobile browsers have the option right there in the menu easy to access to correct this issue.

This is where it’s located on android chrome. It’s at the bottom of the option menu that comes up when you click the three-dot menu button at the top right. 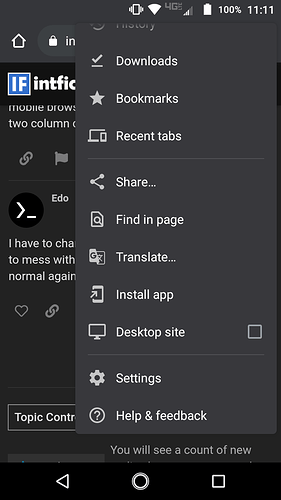 Thank you! That actually fixed everything. At first I thought you suggested android desktop mode. But, this really helped a lot!