IF works adapted to other genres / media?

I’m curious - does anyone know examples of work that started out as IF and was then adapted to another genre or medium (short story, novel, screenplay etc)?

I know many examples of static fiction adapted to IF, but not the other way.

There were a couple of Zork game books, I believe? Okay, some quick googling confirms that, and also the existence of a line of “Infocom Books” published starting in 1988 (a little mate, no?) with entries for Wishbringer, Enchanter, Planetfall, Stationfall, and then two Zorks (The Zork Chronicles and The Lost City of Zork).

I’m racking my brains for anything else - I wouldn’t be surprised if in the amateur era, there were some authors who used settings, characters, and plots from a game in later-published fiction, but I don’t know of any actual examples.

Depends what you mean by “another genre”… Mud Warriors was turned into an adventure game for the Game Boy, but that’s obviously not “static fiction”.

I suppose I mean non-game really. But perhaps (other than the Infocom books) it hasn’t happened?

Direct adaptation, no, not that I’ve encountered. I have seen IF authors use their IF skills and sensibilities in other places. Sam Barlow (of Aisle fame) is a good example with his involvement with the six-episode long interactive quasi-film #WarGames (Same IP as the 1983 film by the same name). It was bankrolled by MGM studios as an experimental movie production to determine the public’s appetite for the interactive film genre; the project was managed by a media firm named Eko (previously Interlude). Sam Barlow came to Eko’s attention after he released Her Story. They hired Sam Barlow as executive creative director and creative lead for the #WarGames project.

MYST had a bunch of tie-in novels, but that’s more mainstream commercial than IF.

If you broaden to mainstream (I know, probably not your intention but…) Silent Hill (survival horror/adventure?) became a movie series, and The Witcher (RPG) is a Netflix series.

I’ve seen a couple of student screenplay treatments of Spider and Web. (Just as screenplays, nothing that got produced or staged.)

The Witcher (RPG) is a Netflix series.

The Witcher was a series of books first, then adapted into videogames, then a Netflix series. I think the TV show is more based on the books, although I don’t know for sure.

Plenty of popular videogames have gotten second-rate tie-in novels. (I’ve read an Ico novel and a Darksiders one, for no good reason.) It’s not an interesting category unless you look at IF specifically. But I can’t think of examples other than the Infocom series.

I’ve seen a couple of student screenplay treatments of Spider and Web . (Just as screenplays, nothing that got produced or staged.)

I don’t suppose those live online, do they? I tried searching for them, but I get buried in a barrage of Spiderman fan-fic. I’d love to see how they adopted them.

Oh, that’s right – Rob Swigart released his electronic novel Portal as a traditional novel. It’s pretty much exactly a transcript of playing through the game, since the game had no real interactivity beyond “find the next story segment in the database”.

There are a couple of examples of unfinished 8-bit text adventures eventually ending up instead as novellas or novels; but I don’t have those references to had at the moment… Will add them here if I can dig them up later. (Several 80s and 90s text adventures authors went on to be semi-professional authors)

The IF adjacent, Lords of Midnight games have been novelised.

There are examples of adventure games being bundled with specially written novellas, set in the game world, when they were originally sold; such as Peter McBride’s work for the Level 9 games.

Thanks - I’d be interested to look at those if you can track them down.

If you consider visual novels as “IF”, it’s very common to adapt them to anime. 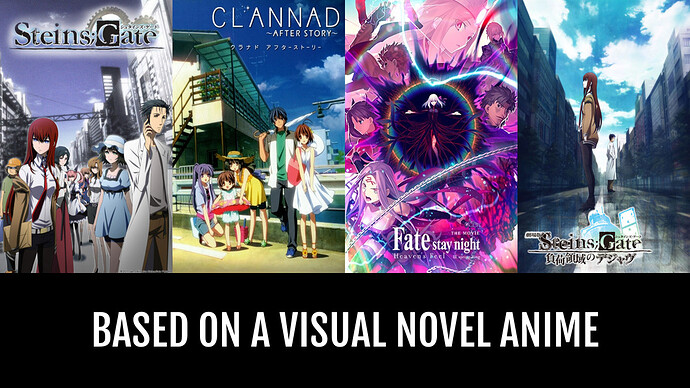 Based on a Visual Novel Anime

Complete list of based on a visual novel anime, and watch online. These titles are based on a Visual Novel: an interactive game with anime-style artwork and an abundance of static graphics. These computer-based games have minimal gameplay, and...

Thanks - I’d be interested to look at those if you can track them down.

Edit: again, not the droids I was looking for, but Fergus McNeill’s early prep work for a collaboration with Level 9 on a Star Wars parody, potentially to be called ‘Gross Encounters of the Worst Kind’ or Bizarre Wars, exists in the comic novel Star Drawers; an expanded version of what would’ve been a novella to accompany the game.

The “point-and-click” Telltale Back to the Future game, considered almost to be “BttF 4”, was adapted into the graphic novel “Back to the Future: Citizen Brown”, by the film trilogy’s co-creator Bob Gale.

Papers Please was adapted into a short film in 2018, though it is a bit outside what is usually considered IF.

I believe Adam Cadre is working on a Photopia novel.

Heaven’s Vault has been released as a book, I think, while it was an Inkle game before.

That’s given me plenty to follow up on - thanks everyone.

Not a strict adaptation, but a different story with some of the same characters: Alias ‘The Magpie’: the Bearded Victoria, was a semi-improvised show we put on as part of an evening to celebrate the completion of the game. The eponymous Magpie, played by myself, attempts to steal a rare postage stamp from an auction house. The “bearded Victoria” was printed with the top half of Queen Victoria’s head and the bottom half of King Edward VII’s, and only a few still exist. In this clip, Lady Hamcester was played by Mim Hall and Major Hilary Buff-Orpington by Greg Davies. I’d written a broad outline of the plot and we improvised all of the dialogue.

There is another clip somewhere, but I don’t have the right permissions to share it. I hope you’re able to watch this one.

The video doesn’t seem to work for me

Is there another way to view it?