I have a case where some classes are going to be using Inform 7 as part of teaching coding and, as part of that, we have modified the styling. You can see what it looks like in the Inform 7 IDE:

Which looks really good. The problem is when they create a web-based version of the game for display (using Quixe) all of that work on styling is entirely lost:

Assuming that browser-based play is likely to be the standard operating procedure for these classrooms, I’m guessing it makes no sense to worry about Glulx styling (via Glulx Text Effects) but rather just modify the CSS as part of the interpreter. I tried generating the above in a Vorple interpreter to see if that mattered but I realized belatedly that Vorple and Glulx aren’t working together.

What I wanted to double-check is if I’m correct on that idea of just relying on the CSS rather than text styles via extensions? If I am right, it sounds like this would be re-work each teacher would have to do every time they compiled for release. (A challenge there is that they often modify examples on the fly for demonstration purposes.)

I’ve been working on adding stylehint support to Quixe. Try this template. It’s quite experimental and there will be some bugs, so let me know what you find. I just saw that the styles are lost if you clear the window/restart. But it’s enough to try in a class setting.

Thank you! That in fact does the trick, as seen here: 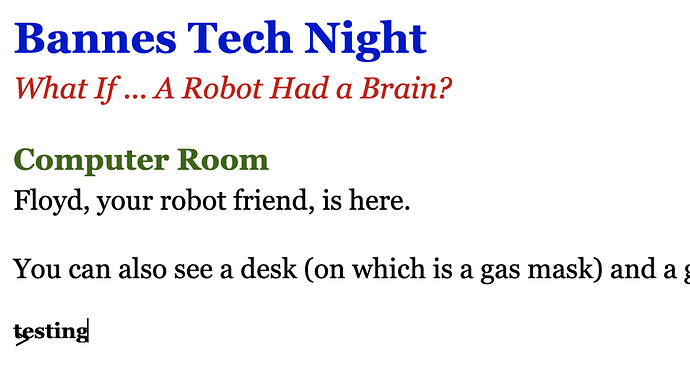 That’s the interface as it displays with your modified template. Which is awesome. Notice the prompt has that odd bit to it; only in Chrome. I found a solution to that here:

Looks like it happens because the input field is absolutely positioned in relation to an inline element, which is a Chromium bug reported here: https://bugs.chromium.org/p/chromium/issues/detail?id=1001438 (they’re saying it’s going to be fixed for not the next Chrome release but the one after that.) You can monkeypatch it by adding this CSS somewhere on the page: .InvisibleCursor { display: inline-block; }

I’ll play around with this a bit more and see if I can find anything untoward but right now this looks quite good indeed. I can always steer people away from a restart.