I hope people donate to the IFComp prize pool

Last night it occurred to me that IFComp is just over a month away. I always get so excited about that, but I’m particularly curious to see what effect the pandemic has. I’m really hoping for at least a few good parser games, and I beta-tested one this time. I went to check out the prize pool, which I don’t think I’ve ever done this early. There were only two prizes. I hope that’s just because it’s still early.
A couple of years ago I put together a bucket list. I tried to keep it realistic, but it’s probably too travel-heavy, for example. One item on the list is entering IFComp, but I suspect that’s still a few years in my future. Another item is donating a prize to IFComp. Now I’ve done it! Yay me!
When the Colossal Fund was announced, I was concerned that it might lessen the motivation for people to donate to the traditional prize pool. So far my concerns have been wrong.
I just want to put this out there as a reminder to donate to the prize pool. Authors have been working very hard on their entries, and they deserve some fun prizes to choose from.

Thanks for the reminder! I’ve decided to donate ‘make a 30 min sequel in the author’s world’ prize again this year.

Yes, thanks! HanonO posted a link to the blog post, but I’ll repeat: The little blue progress bar is up on the web site. We’re taking donations again, both cash and items for the prize pool.

One easy and low-fuss option for donating prizes that may not immediately occur to people: it’s dead-easy to offer a prize that you will order and fulfill via an online website, such as your favorite book from Amazon, or artwork on a mug or a T-Shirt that you create and customize via a print-on demand service. Last year I offered a mug I created as a feelie for my game on RedBubble - it’s an incredibly simple matter to order and just type in the shipping address to your recipient after the comp without needing to worry about secure packing or driving to the post office.

When I did theatre, there was the “golden screw award”. Would something like that make sense here?

That sounds interesting! What does it mean, or what is it for?

The Golden Screw Award was a square piece of 2 x 4 with a large lag screw stuck in it at an angle. The whole things is sprayed gold. It was awarded to the most spectacular and/or amusing screw-up for the season.

I think I prefer the Golden Banana of Discord.

the Golden Banana of Discord. 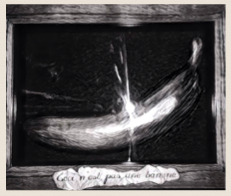 Thanks for the reminder! I found some relics from high school while excavating my garage, and I saw this thread right when I was asking “what the hell should I do with these?”

Just wanted to say that for anyone thinking of picking my prize this year, I’d be interested in either parser or choice. I’ve had fun with Twine and Choicescript and would be willing to go down that path, but love Inform, so either one would be good!

I said this in my own review topic, but let me reiterate it here: if you pick my prize, I’ll make something fun out of it, no matter whether I rated your game with a 10, a 1, or not at all because I haven’t played it yet. (I will!) There’s literally no game I couldn’t have fun with when writing a poem.