How to play Walking Into It [Split from original thread]

Try locating the wii.py file in Finder, right click on it then hold the option key and select Copy "wii.py'' as path. (You can also select the file in Finder then press CMD-Option-C all at the same time to do this) This will put the location of the game on your hard drive into your clipboard. 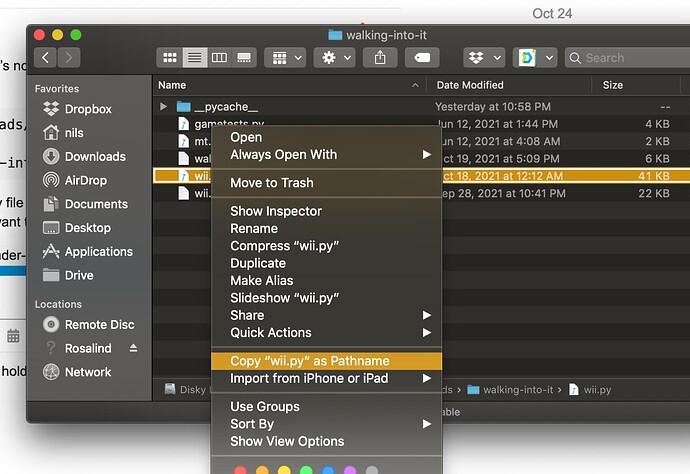 Worked like charm. Looking forward to playing Walking Into It today!

I’ve been wanting to play “Walking Into It,” but I confess I don’t even know what Python is, so I’m positive I don’t have it installed. Kind of bummed out that I can’t play it.

If you have a mac python comes preinstalled.

In Applications/Utilities you can find a program called “Terminal.app” (or you find it with Spotlight), when you launch it you should get a window that looks like this: 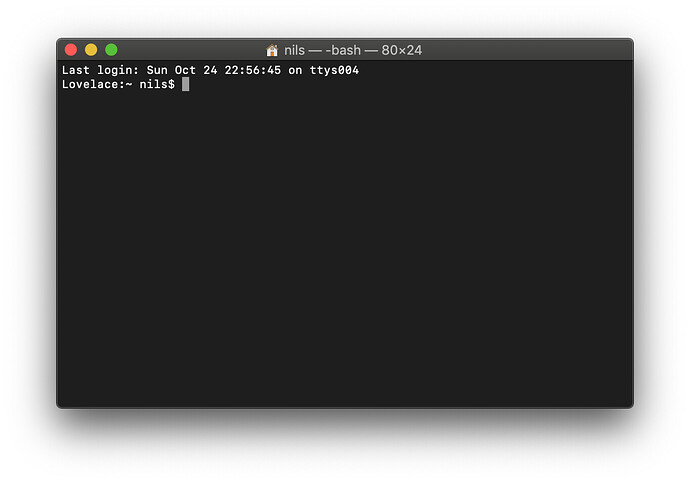 image1364×954 63.5 KB
Then you’ll want to type cd Downloads/walking-into-it (assuming you downloaded and unzipped the game into your Downloads folder). (You’ll want to download the updated version, the version from the zip file at the start of the competition doesn’t work with macs).
Finally you can type python wii.py to launch the game. It should look like this: 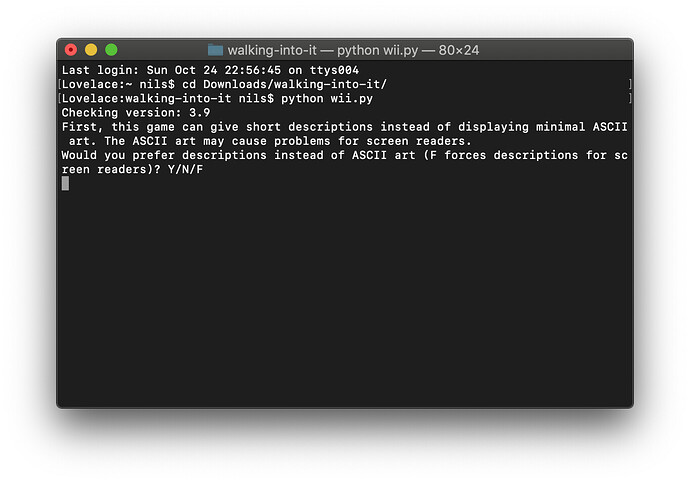 If you’re using windows hopefully someone else can jump in with instructions.

I’m on a mac, so OK. I will give it a whirl.
But, um… in your last screen shot, it asks “First, this game can give short descriptions etc etc.” Should I answer yes or no to that?

Ack, I found the Terminal app, but there’s no option to unzip the file, which I guess is the wii.py file, so the terminal thing says

and no amount of any clicking on the py file brings up any option to unzip. I’m going to sleep and then face this tech beast tomorrow, as I do want to play.

Edit: I have a hunch that since WII is under-reviewed but well-reviewed, there are others like me who don’t know how to play it, but don’t have my poise and confidence in admitting that they’re hopeless in the face of things called “Python.”

If a mod could split this into a “How to Play Walking Into It” thread, a.) people could figure out how to play, and b.) this worthy thread would not be hijacked.

there are others like me who don’t know how to play it, but don’t have my poise and confidence in admitting that they’re hopeless in the face of things called “Python.”

It’s tough but good to admit that! Certainly when someone told me about it and how it was super powerful and the Wave of the Future, etc. it sort of intimidated me. Ironically, it was my fear of Twine that kept me doing this in Python, which people might overall fear more. I could’ve learned Twine and waited a year to submit the game, but it just wasn’t big enough, and I wanted it done!

The below doesn’t quite seem to fit in this thread, because it’s more general advice, but I suspect it will be useful to someone, somewhere, as a thought experiment.

Note that any bugs after running wii.py are reportable. I suspect anyone installing Python now will have the latest version, but I still want to check them out.

Note that any bugs after running wii.py are reportable

I did run into a bug. How do I report that to you? Just copy/paste text with the bug and send it to you?

Yes, forum PMs work fine! It can be attached as a text file.

Wonder whether it’d be good to move this thread out of the author’s forum, since it might be helpful for non-authors too? I think the white edit pencil up top lets you do that.

If anyone wants to play on Windows, they have to install Python first. Nowadays it is a straightforward business. You can download the installer from the Python webpage or you can install directly from Microsoft Store. The rest of the commands are the same. Navigate to the folder using the cd (change directory) command.

Copy the path to the file. It’s in the address bar. Should be something like C:\Users\MyUserName\etc. 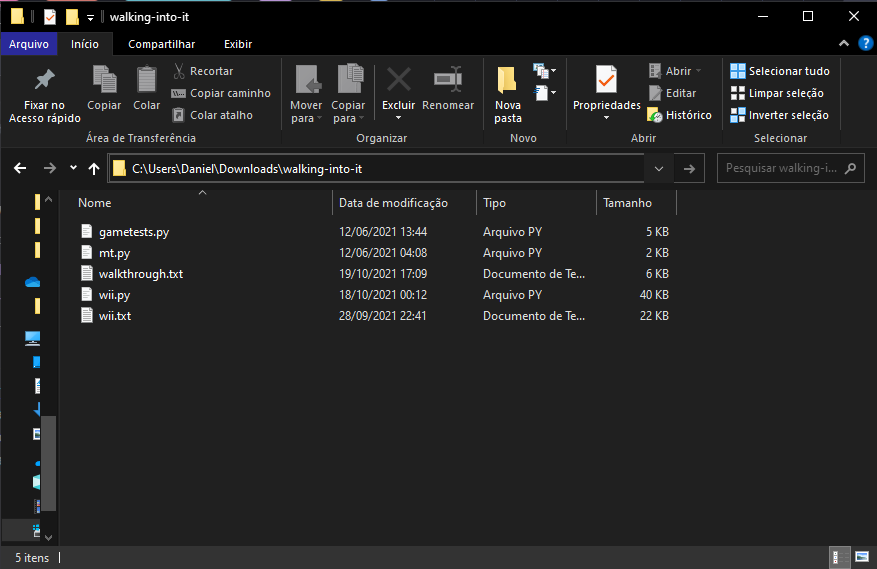 Open a terminal application. There are two that come pre-installed on windows. Press Win + R and type either cmd or powershell, whichever you prefer.

In the terminal use the cd command followed by the path to the file. Use quotation marks around the path name if any of the folders in the path have space.

Then lauch the game using Python.

The only method I’ve ever had success with when it comes to running Python is to run it inside Ren’Py. Unfortunately this has two downsides:

While it would be logical to be able to run Python in an interpreter, and I do have both Python 2.7 and 3.8 installed on my computer, I’ve had no success in trying to follow the instructions on Google.

Some Python interpreters in Windows can manage the feat in fewer steps. I hope.