Would any Apple connoisseurs be able to help us decide what options to offer for the software infobox (which is for authoring systems, interpreters and utilities, rather than games)? The screenshot below shows what we have come up with so far.

The main problem seems to be finding the right words to distinguish between current Macs and the retro ones.

Though any general comments about the list would also be welcome! 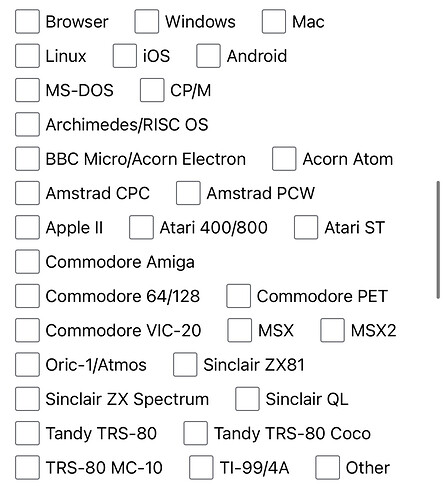 We are thinking of maybe adding “Apple IIGS”, and “Apple Macintosh” (or “Other Apple/Macintosh”).

The official name is now “macOS”, and was previously “OS X” and before that “Mac OS X”.

So I think it would be better to change “Mac” to “macOS”, that would differentiate it from retro Apple computers.

There’s still a problem if some software only work on older macs when it was still “OS X” or “Mac OS X”, but I don’t think it’s worth adding those two. (After all, there aren’t different options for Windows versions and so on.)

Thanks! To be clear, are you suggesting the options would be:

Would you also include “Apple IIGS” or “Other Apple/Macintosh”? Or would anything else be covered by the general “Other” option?

To be honest I’m not really a specialist in retrocomputing (I wasn’t even born!), so I have absolutely no idea if the Apple IIGS is different enough from the Apple II to warrant a separate category.

Actually after a bit of searching on Wikipedia, it would seem that the Apple IIGS ran on System 1 to 6, so I’m not really anymore sure about the “classic Mac OS” category. (I was basing myself on the Wikipedia article.)

The only thing I really think would be better is to replace “Mac” by “macOS”.

The Apple IIGS was, in principle, backwards compatible with Apple II software. I don’t know if enough IIGS-only IF games were built to warrant a separate category.

… unless there’s a need for categorizing Apple I software, which seems unlikely, or Newton, which I know almost nothing about.

I am an Apple II guy and will look at this within the next couple of days.

If you’re going to distinguish the various 8-bit Commodore micros and the Sinclair ZX81/Spectrum/Amstrad CPC, a similarly detailed list for Apple computers might be:

That’s the end of the Apple II line. For the Mac, we have:

After this, every model supported the same basic features (true-colour graphics, CD-quality sound, upper and lower-case text) so software support was mostly about what OS and CPU architecture you could run. The eras were basically:

@Screwtape has summed up the Apple II tech distinctions pretty well. For purposes of this wiki and looking only at authoring systems, I’d finesse it into two streams:

Distinguishing between the 6502-based Apple IIs and 65C02 Apple IIs is too complex for laymen, and the computers weren’t regarded too differently by Apple II users. The 65C02 ones could address more memory, had extra graphics modes and some additional processor instructions. So there were eventually programs that ran on the 65C02 and wouldn’t boot on the older computers, but not the other way around. A game that ran on everything would sometimes just be labelled “Apple II series” (with a memory-required spec). The earliest Apple IIes still used the 6502, which makes trying to sublabel things even more confusing (you’d have to separate Enahnced Apple IIes that had 65C02’s from the old ones that didn’t. And annoyingly, the e in IIe already stood for Enhanced.)

The Apple IIGS happens to run all 8-bit Apple II software via native (transparent) emulation, but also has its own new 16-bit identity, comparable to the Amiga / Atari ST. Software written explicitly for the IIGS 16-bit hardware won’t run on any 8-bit Apple II. Hence the 8-bit / IIGS distinction: If the software was written for the IIGS only, you’d label it IIGS. If it was written for any of the 8-bit Apple IIs that preceded the IIGS, you’d label it Apple II (8-bit) - even though it will happen to run on the IIGS as well in its emulation mode.

For completist consideration sake, there is also the ill-fated Apple III platform, but I’m not aware of any IF authoring tool written for it. This was the machine where if you thought some chips had become unseated due to overheating, you were advised to pick up the computer and drop it.

Does this sound ok?

Thanks for all the information! In the end we went with the following list:

I say “in the end”, but really it can be altered as we go along, when we see what software gets added to the wiki.

I didn’t expect to see MSX there on the list. Do you include Japanese market? NEC PC 88? NEC PC 98?

I didn’t expect to see MSX there on the list.

Some on the list I know nothing about. We just hope that including more will prompt people to add more software.

Likely we’ll wait to see what software gets added before changing the list of options again.

If you add software for unlisted systems you can use the “System details” field. If a system gets mentioned enough I’m sure it’ll soon get its own tick box! 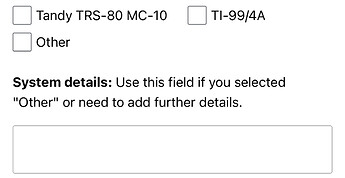 Here is what we ended up with. There haven’t been any howls of protest yet so I’ll mark this topic as solved. However, feel free to reopen the debate at any point! 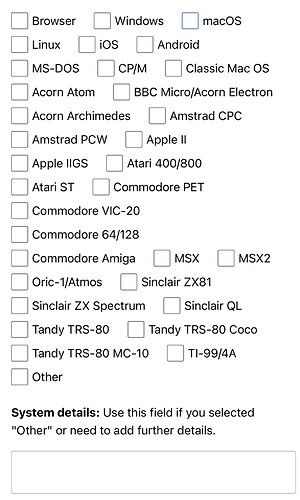