Is there a way to assign a variable akin to health points to the player or characters within the game? Something that could go up or down depending on the actions, of course possibly ending in death?

The example “Lanista 1” shows how to implement hit points, randomized damage, and death: 7.5. Combat and Death

Is ‘attacking’ an action I need to define as a rule or does it exist in Inform already?

There is a “block attacking” rule, which I think you’ll need to disable.

find it in the actions index
CM (commands)
attack

You can also do something like “the block attacking rule does nothing when the noun is a combatant” (assuming you have defined “combatants” as a kind of thing that participated in the combat system - could be that you just want “person” if you haven’t done that). This way the default behavior still exists as to anything you haven’t specifically exempted, so less work needed from you versus Drew’s more customized approach.

(To be clear, both should work fine, it’s just a matter of what you prefer and slots more easily into your game!) 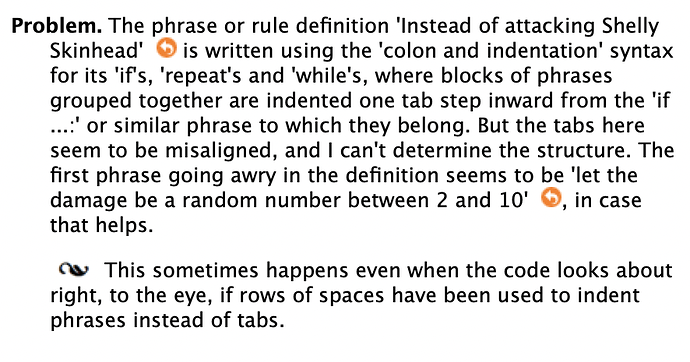 Hmm, when I copy and paste the code from your post, it doesn’t throw an error for me.

But having said that, I see two issues here which it can’t hurt to fix anyway:

In general, if you get such an error, one way to solve the problem is to re-indent that whole piece of code – manually, but with the help of the IDE.
Start at the topmost statement where the problem occurs (in this case: “Instead of attacking Shelly Skinhead:”), move the cursor to the end of the line, remove any superfluous spaces after the colon, and press Return. The Inform IDE (on Windows, at least) will then automatically start the next line at the proper indentation. Copy-paste just the next line ("let the damage be a random number between 2 and 10;"), move the cursor to the end, press Return, and so on. Do that line by line. The IDE will increase the indentation another level in the lines following a colon (so in this case, after the “if ...:” lines). After an if block is finished, go back one indentation level by pressing Backspace once. If you proceed this way, it’ll be guaranteed that the indentation/formatting is correct. (When the overall definition is very long, it can’t hurt to compile several times while doing this, just to make sure it’s right.)