they both just show a black dos box and then it disappears very quickly. ive tried running it from command and it does the same thing. they both have 32 bit windows exe’s that are supposed to run a gui. they both worked before in win 10 about 2 years ago. maybe there is something wrong with wow64? i dont know. ive also tried running them in compatibility using all the settings and os’s.

I pretty much use these daily, as Quill/PAWs is my thing. I never use the Windows versions… DOSbox versions work great.

Illustrated as working via DOSbox… 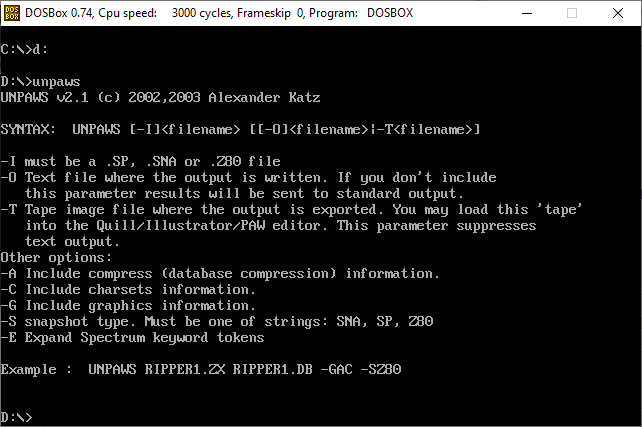 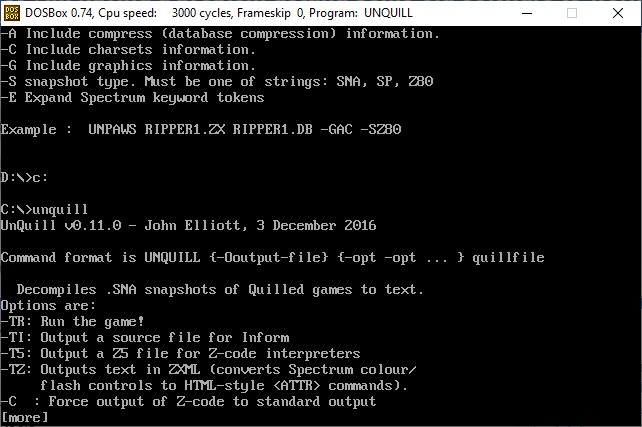 And for completeness, here’s the Quill and the PAWs pages from the IFwiki…

ok, well, neither of those programs run a gui in windows, sorry. must be something wrong with my win 10?

Your version of UnQuill is outdated. The last one seems to be v0.14, November 2020.
I didn’t know that Unpaws also allows to decompile The Quill games. It’s interesting for the messages that appear differently. How do you interpret this sequence?: {6}{6}{16}{6}

I looked in InPAWS, but the code {6} does not appear. where can I find the meaning of these codes?

Why do you need a GUI, Ed? The command line is very easy to use.

(Yeah, the pictured version of unQuill I was running is just one of my many versions of unQuill I have on my system.

I have a more recent version in another folder. I tend to use unPAWs more often as it will decompile Spectrum Quilled games as well as PAWs ones.)

There are different advantages and disadvantages of each. unQuill’s annotations are a bonus and it covers several of the different platform Quills, whereas I like unPAWs myself because I find the output a lot clearer… I tend to use unPAWs for everything; although I’m using the Quill Adventure Guides tools more and more, when it comes to peeking into databases to work out game logic. It is a very cool tool for doing that type of thing quickly.

Re. the {6}{6}{16}{6} bits, auraes… They’re the invisible “control characters” used on the ZX Spectrum to change things like the font & paper colours and insert a half/full line break, from within the editor itself.

Would be two half-line breaks, giving you a blank line before the response I can’t see anything special was printed in yellow text.

Just had a check, ed, and the Windows version needs to be run from the command prompt, just like the DOS one… 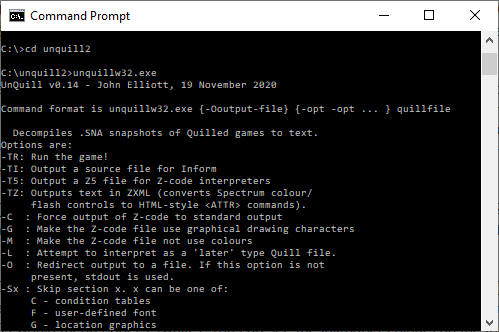 There isn’t a GUI. Nothing wrong with your Windows 10… 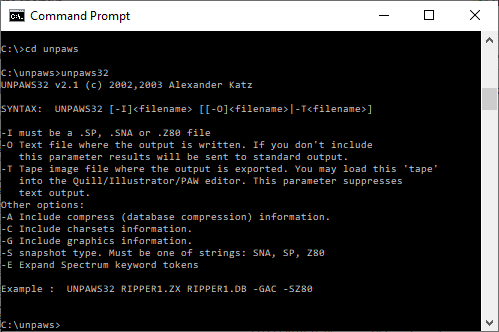 For example CHR$ 6 was use to denote a half/full line break in the editor.

Thank you. This is interesting because it seems to me that UnQuill sometimes has problems interpreting line breaks.

UnQuill and unPAWS actually never had a GUI, maybe from a 3rd party but not officially. The nature of these tools is being used at the commandline @ed. The disappearing Window you see is the Windows command line prompt that closes after the program being exexuted. If you open the directory where the tools are located in CMD or Powershell, the output remains on screen.

If your aim is to disassemble Spectrum Quill databases, you can use UnPAWS for that as well.

@auraes UnQuill is a bit buggy. I had a few issues especially when decompiling C64 databases. I chatted with John Elliott about it and he fixed some of the stuff. He actually sent me a diff for it, not sure if it ever went into the main codebase.

@auraes UnQuill is a bit buggy. I had a few issues especially when decompiling C64 databases. I chatted with John Elliott about it and he fixed some of the stuff. He actually sent me a diff for it, not sure if it ever went into the main codebase.

I had also reported to him (2020) a crash with the decompilation of Dorothy Millard’s Westbury Mystery on c64; he had corrected the problem:

The problem seems to be a corrupt entry in the Response table – there should be a 0xFF byte after the DONE to indicate the end of the entry, but it seems to have gone missing. So UnQuill tries to interpret the bytes that follow as actions, even though they’re out of range, and reads off the end of its arrays.

UnQuill v0.12.0, by John Elliott. Reads a snapshot (Spectrum, Commodore and CPC formats are supported) of an adventure game written with the Quill, and can:

because its easier to use

yeah it does, read this

What you’ve posted does not make any reference to a GUI. A “Win32 executable” does not signify it has a GUI, just that it runs under Windows. I’ve posted screenshots of the Windows version above.

unQuill and unPAWs either output to the standard output (i.e. command prompt/DOS window) or a text file.

If you need help with the correct format of the command line input required then we’d be happy to help. Just let us know what you’re trying to do (the file format and the type of output you want).

Everyone who has commented here has used these tools a lot to make, port and analyse Quilled and PAWs games… We not trying to be contrary or awkward… just help! We’re all text adventure authors ourselves.

Tell us a little of what you’re looking to do and what you want to achieve. Are you looking at the games to try and work out solutions? Work out how they’re programmed? Extract material from your own work? We might be able to recommend some other tools that fit your particular needs; such as the Quill Adventure Guides or inPAWs… tools that are a little more visual than unQuill/unPAWs.

Are you a former Quill or PAW user, or are you new to the tools and just remember playing the games back in the day? Are you looking to make Quill/PAWed games yourself?