First adapted IF with female protagonist?

Updated Are there earlier commercially published games with a named female protagonist adapted from a novel or other mainstream media, than Adventure In Wonderland (1983, Prickly Pear)? This is the oldest one I know of.

Part-time protagonist, adapted from any media: The Dark Crystal (1983)

Full-time protagonist, adapted from a novel: The Wizard of Oz (1985)}

* Are you really Trillian, or are you the intellectual essence of Arthur Dent improbably mapped into Trillian’s brain for a few turns? A sidebar.

“Mad Venture” (1981) is the first commercial Alice in Wonderland adaptation that I know of, but I don’t think anything identifies the protagonist as Alice. But in Windham’s Alice game (1985) you definitely play Alice.

You might count Below the Root, which I think had several playable original characters in an adapted setting.

Oooh, right, Madventure is a strong candidate, thanks.

I thought of BTR (two of the five available character choices) which is a close cousin to Windham’s Alice from a gameplay perspective, but if the definition doesn’t require text input it could move the “full-time/from novel” a year earlier, yes.

There’s a 1986 version of Alice that IFDB tags as female protagonist:

The AGT game file is linked from there, as is a playable DOSBox Internet Archive version. I just had a quick go at that, but you definitely play as Alice.

This is also the only game I could find via a tag search in IFDB that matches both female protagonist and literary adaption.

Labeled as 1983, the current leader for commercial (if small potatoes even-for-1983), full-time protagonist, definitely-named, and from-novel seems to be Adventure In Wonderland.

Some sort of partial credit for “well, you’re probably Alice, right?” in that same category to 1981’s Mad Venture.

Labeled as 1983, the current leader for commercial (if small potatoes even-for-1983), full-time protagonist, definitely-named, and from-novel seems to be Adventure In Wonderland .

Now if I can find a TRS-80 emulator for my computer. Off to look!

Here’s an adaptation of Alice in Wonderland by Magnetic Scrolls: https://msmemorial.if-legends.org/games.htm/wonder.php

1990’s way later than the other candidates here.

But a fine reminder that, wow, there’s so. much. carroll out there.

Now if I can find a TRS-80 emulator for my computer. Off to look!

You may or may not know this already, and apologies if you do, but what you need is a Color Computer emulator, which is not necessarily the same emulator as those that emulate the Tandy TRS-80 models I, III, and/or IV. Radio Shack/Tandy reused their existing TRS-80 monniker from their existing line of (for the time) higher-end computers, but the Model I and successors (which ran a series of custom DOS-like operating system on a Z80 processor) were not particularly similar to the Color Computer line (which ran a DOS-like operating system licensed from Microsoft on a Motorola 6809 processor). I have seen emulators that emulate both systems, but it’s not necessarily the case.

Radio Shack/Tandy, never a company to let a dead horse peacefully without being flogged, used the TRS-80 label to label other unreleated computing products, as well: for instance, the TRS-80 Model II was part of yet another line of computers, not compatible with the model I (though models III and IV were model I-compatible to at least some extent), and succeeded by the compatible-with-the-model-II models 12, 16, and I forget what-all else, none of which was compatible with Model I, III, or IV.

That being said, if you don’t find a Mac emulator for the CoCo system that works for you, I have had good luck running VCC under Wine on Linux.

You may or may not know this already, and apologies if you do, but what you need is a Color Computer emulator, which is not necessarily the same emulator as those that emulate the Tandy TRS-80 models I, III, and/or IV.

I know this only because my own family was a Color Computer family when I was very small and people would occasionally gift us software that I couldn’t run.

There is “Alien Adventure” from SoftSide Publications. You’re playing Ripley right after the events of the first Alien movie. I doubt this was properly licensed. My guess is that in 1981, nobody cared anyway. 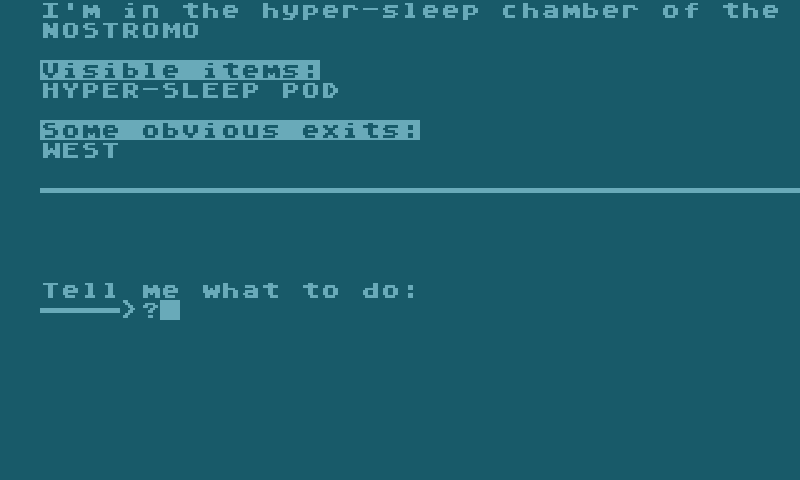 Interesting, but is she ever named? From what I can dig up on my phone it doesn’t appear she is, so this might be in Mad Venture asterisk-land.

I wonder if there might have been anything early on in the type in BASIC listings format? Though female protagonists are particularly rare.

As far as I remember she is not named in the game itself. In this particular case though I personally would let that count because it’s pretty clear it is her. The events are set directly after the first alien movie which is hinted very obvious in the adventure. Even the cat is there when you wake up in your hypersleep-pod.

Part of the exercise is tracking down the first game willing to say (For example) “yup, this is a game starring a lady named Ellen.”

Looks like it’s issue #34. And that said, the hairstyle in the Alien Adventure ad sure projects “it’s circa 1980, and I’m a lady,” so I’m slowly plucking the petals off this asterisk…

The predecessor to Mad Venture is Palace in Thunderland (also 1981).

(oddly enough, the next game I’ve got on my Renga in Blue queue is alien adventure, as the follow-up to arabian adventure)

Not strictly relevant as this was a choice of a later artist, but I should point out the Atari 48K version of The Count (1979) has a female protagonist on the cover. 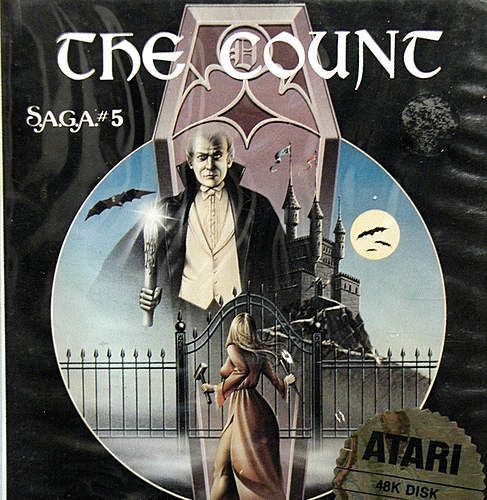 Both Book of Adventure Games and this Palace walkthrough call Mad Venture the earlier game. But neither cover says much of anything about the PC.

And, yeah, a S.A.G.A. cover is too little too late in this sweepstakes (no vampire pun intended, probably.) Unlicensed-But-Advertised Ellen Ripley still in the running.

Double checked – it does look like the Thunderland trademark got filed later. Huh. I guess I’ll have to switch that in my database.

The only genderlocked protagonist I can think of from before 1980 is the male hero in Alderberan III, based off the Retief novels. It just wasn’t common for men or women.

Will o the Wisp and 1/6 of Six Micro Stories then did it (again male) in 1980. Very obscurely, Odyssey #2, Treasure Island by Joel Mick and James Taranto has masterbation as a verb and implies a male character in the process, but that’s incredibly easy to miss.

City Adventure from 1980 is also genderlocked, I think… unless it’s just that you have a girlfriend and it’s technically possible that the PC is female nevertheless.

Also from 1980, it looks to me as though In search of Dr. Livingston genders the protagonist male through a pronoun in the book at the beginning?