The Ambitions will conclude over the coming weeks, with each receiving their final instalment in three parts…We are already busy on new stories, systems and advancements to ensure that completing your character’s Ambition won’t be the end of your game.

Ten years is a long time, and we’ve seen you get up to all sorts of inventive and unexpected things across the decade – but there’s plenty we must have missed! Share your memories of the Neath for the chance to win an exclusive prize.

Submit your memories in any format you like (written, drawn, baked, crafted, photographed – as you please!) and our favourites in each of the following categories will win a [REDACTED] Companion for their Fallen London character! 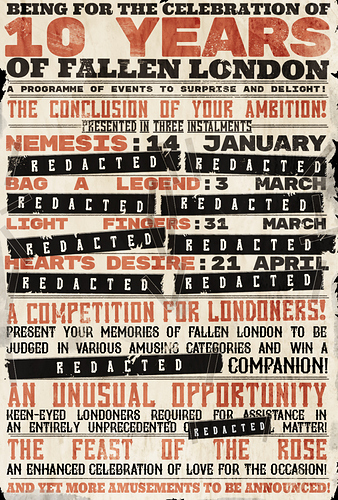 See Failbetter Games blog post for more information and how to enter the contest.