I found Die Drachen von Laas on The Internet Archive. Apparently it’s on IFDB too. Unfortunately there is no DOS-download on either site. I tried on other sites (the slightly dodgy ones, you know…) but the download I got seemed to get stuck on a loading screen. (Maybe I didn’t wait long enough? I gave it 5 whole minutes).

It looks interesting enough for me to dust off my highschool German.

7-zip can be used to open not only the provided 7z file, but also the disk1.img disk image file inside. You can extract the contents, and among them is LAAS.EXE.

I just tried running that in DOSBox, and it seems to work well.

If you run it as “laas v” with the command-line argument “v”, you get a version with VGA graphics. The graphics do not seem to come up by themselves, you have to display them explicitly by pressing the DEL key (at least when you enter a new location - I don’t know whether there are graphics for special events or occasions).

It’s possible that the pictures are slightly prettier on the Amiga version (as would be typical), and the Amiga version also has a different font (see screenshots on the ifwizz database at Drachen von Laas (1991, deutsch) - Textadventure mit Grafik), whereas the PC version has the standard DOS font. So it might be worth trying the Amiga version if you have an emulator at hand, but not absolutely necessary, I guess.

In the comments section of this CRPG Addict post, there’s some advice on how to play the upcoming “Die Drachen von Laas”. User “Buck” writes:

Here’s the most important stuff from the manual

Keys:
F1 Look around (Description of the Area)
F2 Show Exits
F3 Condition
F4 Inventory
F5 Spells (Spells which can be used by Aszhanti)
F6 Print
F7 Credits
F8 Graphics on/off (Had no effect for me in the DOS version)
F9 Save
F10 Load
HELP Switch between your two Characters (that’s INSERT on a modern keyboard)
ESCAPE Delete what you have typed
TAB Bring up last command
DEL Show image of current scene (DOS version at least)

Spells: This is important as the game only gives you a number, but you have to type the four letter code to cast it (very simple copy protection)
Spell I - LEVI - Levitate small items. Can have different effects depending on the experience of the caster
Spell II - FEBR - Fire bringer, lets a small flame appear. Can be used in fights and to set things on fire.
Spell III - KUBL - Ball lightning - injures a monster
Spell IV - UNSI - Makes an item or something similar invisible for a moment
Spell V - TOPA - Can confuse an enemy that much that he’ll hardly hit in combat

The CRPG addict covers the game in two posts: 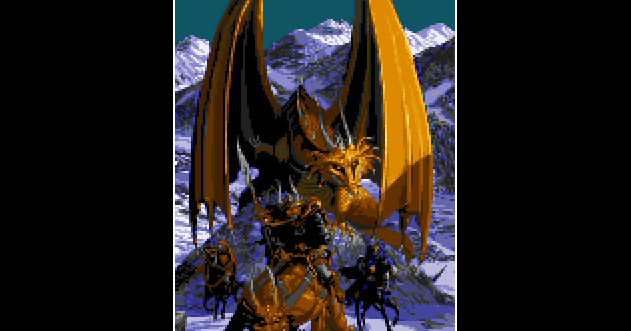 A blog in which a dedicated addict plays through all PC computer role-playing games (CRPGs), in chronological order. 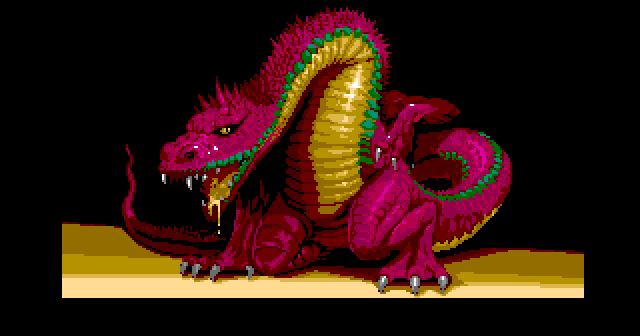 A blog in which a dedicated addict plays through all PC computer role-playing games (CRPGs), in chronological order.

Wow, John! You sure went above and beyond my hopes. Thank you so much.

Maybe it would be worth playing the Amiga version. The graphics and font would be part of the whole authentic experience. Any recommendations for a trustworthy and, also very important for a tech-illiterate such as myself, easy-to-use emulator?

I think WinUAE is typically recommended, but I tried it just now and couldn’t get the game to run, unfortunately. [EDIT: I now managed to run it from a different disk image, see below at the end of the post.]
It showed the “Attic” company logo (even with sound – turn down the speakers) and the title screen with the dragon, and after a click, the title screen went away, but the actual game didn’t start. I don’t know whether this just needs some fiddling in the WinUAE configuration, or if the version I downloaded is somehow incomplete/corrupted.

If you want to try it yourself, you need to download WinUAE, of course, but also a separate Kickstart ROM file, for example from here: Amiga Kickstart ROMS : Free Download, Borrow, and Streaming : Internet Archive

In the WinUAE settings under “Paths”, set the “System ROMs” path to the location of the downloaded ROM files (WinUAE will pick the right one, usually by default v1.3 for Amiga 500), and under “Quickstart” - “Emulated Drives”, choose “Select image file” and select the [EDIT: .adf file from here] file “Drachen_von_Laas_Die_1991_Attic_DE.adf” (downloaded from here), and click “Start”.

However, as I said above, the game didn’t load past the title screen, so maybe it’s not worth the effort to try to get the Amiga version running, if it’s just a one-off for this game.

Fun fact: Co-author Guido Henkel also worked on the old Realms of Arkania games and is one of the producers of Planescape: Torment, and he was the model for the Nameless One on the front cover of Planescape (with prosthetic make-up).

EDITED TO ADD: I now got it to run from this different disk image: Drachen von Laas, Die (1991)(Attic)(De)[o] - ROMs Amiga - Commodore Amiga - Games - ADF - Planet Emulation
But I would probably recommend to use the PC version instead, because the font in the Amiga version is harder to read, and the location images take up a lot of the screen space. Just use the PC version with DOSBox and remember to call up and dismiss the images with DEL.