I wrote an extension for VS Code which provides some language support for Dialog.

You can find it here at the VS Code Marketplace or inside of VS Code by searching for “Dialog” or for my handle “sideburns3000” in the extension panel (or even by just opening a folder with a .dg file in VS Code and letting the program search the marketplace).

I’ll take the liberty of reproducing the Readme here, so that people can immediately see whether it’s interesting for them (see screenshots below).

Compiling from VS Code

In the file explorer panel, right-click on the .dg file you want to compile, and select Compile to zblorb (or z8 etc.) from the context menu.

Or: select Terminal -> Run Task ... from the menu bar and choose the compilation target.

Or: press Ctrl+Shift+B (or from the menu: Terminal -> Run Build Task...) and choose which compilation target will be regarded as the default one.

Compiler warnings and errors will be shown in the “Problems” tab, and you can click on them to jump to the corresponding line.

Note: for compilation, the extension assumes that the compiler dialogc is accessible on your system via your PATH environment variable. If that is not the case (or if you want to try out a new experimental compiler version, for example), then you can provide the full path to the compiler executable in the extension settings.

This extension contributes the following settings: 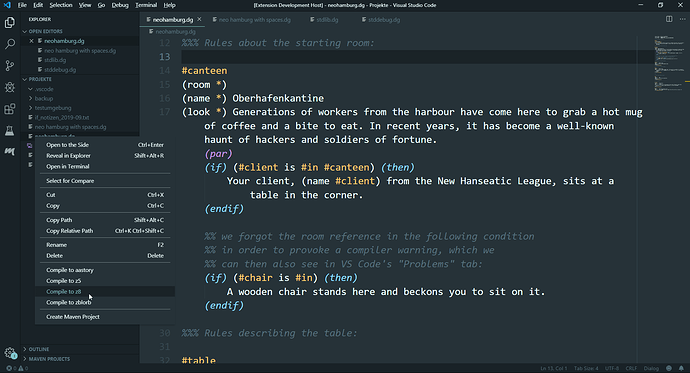 Compiler warning, jump to the line from the “Problems” tab (the colour theme is Material Theme High Contrast): 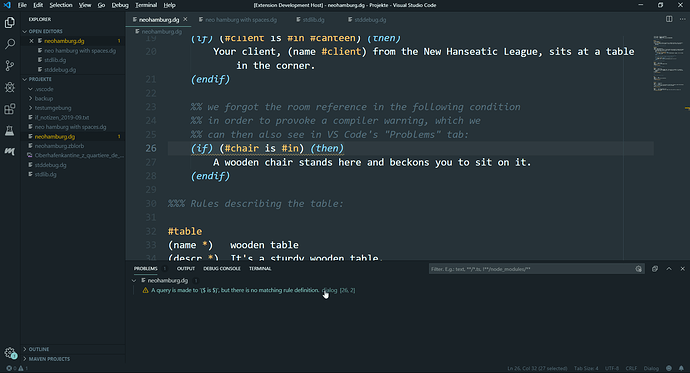 The extension does not implement intelligent autocomplete, tooltips/hover information, interaction with the debugger and other advanced features.

Nice! I’ve been working on a Dialog language extension for VS Code myself but it’s been kind of slow going since I don’t have experience with VS Code extension creation or publishing.

I tried out yours and it is working well, though I do have a suggestion: find a way to tag bare text in rule bodies as strings so that autocomplete doesn’t try to complete every single word while you are trying to type a name or description. Especially for a large file, it gets out of hand and also makes autocomplete useless for the places where it actually matters (objects, values, etc). I was able to do this by tagging text that didn’t match anything else as string.quoted.other. Would also be nice to see a visual distinction between predicates and bare text.

Here’s the file I was working on. It’s got a couple of small bugs, but feel free to take anything from it that might be useful:

Cool, thanks a lot for your suggestions! I incorporated the final catch-all string matcher.

In my first version above, I tried to keep the regexes for my scopes more or less disjunct, in order to avoid depending on the order of inclusion too much (as that seemed complicated and easy to mess up). But the idea of including a matcher at the very end for everything except parentheses seems to work quite well! Everything that’s more specific will have been matched already by that time.
(And for nested scopes and all that, we have to do the inclusion stuff anyway.)

In the new version, I also tried to give the predicates and the actions some colours. By “actions”, I mean elements which appear as list items in brackets like the “look” here: (perform [look $Dir]). I’ve declared them to be strings, which gives them the same colour as the game prose in the editor (just for the “look”, the “$Dir” will retain its status as variable).
My rationale was twofold:

Unfortunately, every colour theme has its own ideas which scopes should receive different colours and which shouldn’t.

Here’s the result so far:

Screenshot from a game: 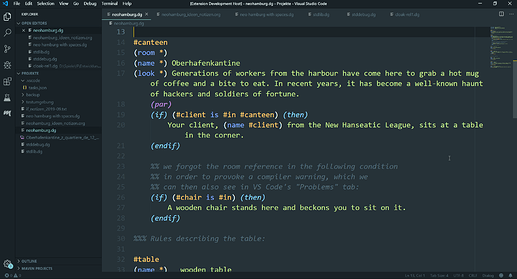 Screenshot from the Standard Library: 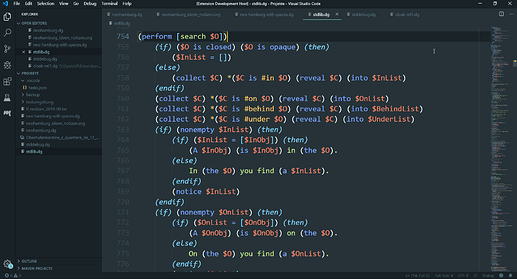 I think will post an updated version of the extension during the next days.

You also raise a good point concerning VS Code’s word suggestions. I need to look into that further.
When we declare everything that’s not otherwise scoped to be a quoted string, then the result seems to be

Possibly the best solution would be to implement a CompletionItemProvider, and maybe I’ll do so - it seems more easily doable than implementing the full Language Server Protocol.

Looking good! Let me know when you post the update and I’ll check it out.

Possibly the best solution would be to implement a CompletionItemProvider , and maybe I’ll do so - it seems more easily doable than implementing the full Language Server Protocol.

LSP takes a little more work to get started, but I’d encourage giving it a try instead of building too much language analysis into the editor extension – the extension is specific to VSCode, but the LSP server would be accessible to authors using many other editors.

(I ignored this advice when I wrote the ZIL extension, but now I’m regretting it.)

MS Visual Studio code is now available for the Raspberry Pi and works well with the inform6 extension.

The Dialog extension is so/so. The highlighting is minimal.

Since Zilf does not work on the most recent version of RaspiOS, I was unable to verify VSCode with Zilf.

I’ve just pushed an update for the extension to the marketplace.

Credit for the update goes to fellow forum member @Natrium729!

Sorry that I’ve taken so long! It was basically a case of me thinking: “Ah, if I’m going to do an update, I’ll also try implementing this and that feature (hover tips, finding references, etc.), and/or go the extra mile and write a full LSP-compliant language server.”
And then, as such things sometimes go, I didn’t get around to doing the bigger tasks, and somehow I unfortunately also shelved, forgot about and never did the more immediate smaller improvements (some of which were suggested above, for example).

But now, Natrium729, who delved deeper into Dialog and into VS Code extension writing than I did, has very kindly given me a reminder and has contributed improved syntax highlighting definitions, with rewritten and more fine-grained scopes, and has also added a word pattern to make VS Code’s word completion more useful for Dialog development.

The functionality is otherwise the same; I’ve updated the screenshots as follows to show the new look. Among other improvements, you’ll see that the colouring in the default theme is more useful now. (Results will still vary according to the quirks of the various themes, of course.) 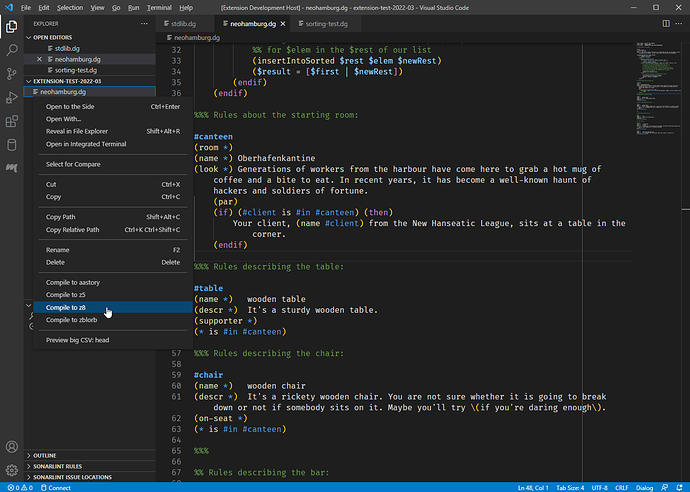 Compiler warning, jump to the line from the “Problems” tab (theme: One Dark Pro):

If you already have the previous version 1.0.0, then the update (to v1.1.0) should be downloaded and installed automatically the next time you start VS Code.
I hope you enjoy it, and wish you happy coding, and thanks again to Natrium729!

Thank you for the nice words!

To add to what was said.

Regarding word completion: #, @ and $ are now considered as part of words, so if you start typing one of these symbols, VS Code will only suggest names starting with that symbol. So if you type $, VS Code will only suggest variables, and so on. (It’s only a basic word pattern matching, it’s not intelligent in the sense that it will suggest any variable name appearing in the source and not restrict itself to the ones in scope. As simple as it is, it really improves the developer’s experience, though.)

Regarding the syntax highlighting: as said in the post above, it will depend on the theme. So if you find something that is not highlighted correctly, do write a bug report and I’ll look into it!

I’m tinking about writing a language server, but no promises yet. In the meantime I may add snippets (for (if), (collect $Words) and so on.)