Hey! I know we loved the games this year, but I’m really curious about the cover art too!

Did anyone else draw their own cover?

And what game’s cover did you like the most?

IMHO, the covers images for the four top-rated games – And Then You Come to a House Not Unlike the Previous One, Dr Horror’s House of Terror, The Song of the Mockingbird and What Heart Heard Of, Ghost Guessed – were all quite good:

Out of these four, I think my favourite is Dr Horror’s House of Terror. It perfectly fitted the (campy) style of the game.

Other favourites are Sting and The Last Night of Alexisgrad:

And the cover of Goat Game is beautiful, as is the in-game graphics:

The two slightly similar planet/moon covers of Mermaids of Ganymede and Ghosts Within are nice.

And the creepy cover of The Waiting Room perfectly matched atmosphere of the game (which I quite liked, BTW):

The little-played (only 11 votes!), but interesting, game Wabewalker has a similarly creepy but good cover:

And finally, The Vaults placed last in the competition, but the cover art is certainly atmospheric (I haven’t played the game):

BTW, sorry about the strange cropping on some of the images. I tried to reference the original images on the IF Comp website, which at first seemed to work fine, but Discourse automatically replaced the images with cropped ‘local‘ versions after a couple of minutes.

I did my own! I cut up a bunch of lines from Hopkins’s poems and collaged the tree trunks, and painted the rest, and used Canva for the text. The original is actually sitting on my floor right now with a footprint on it.

My favorite without a doubt is Dr. Horror’s. The old-fashioned horror movie poster is just genius. And I’m STILL laughing about the Blake Lively affair.

Y’all, I was just thinking about this as we were in the middle of the awards ceremony and I was (not for the first time) thinking about how much excellent cover art we saw this year…

I have no idea if this could be part of the official comp, whether or not our Dev Team would be up for it, etc (so, no promises! this is just an idea!)… but it seems like people would potentially like another side contest for, say, the top three or top ten pieces of cover art?

Not sure what that would look like. Maybe we would host a separate page, with just the art, each with a check box, and judges picked their favorite three? Like, no scores, just pick your favorite three and then we do a top three or top ten comprised of the art that was chosen most?

PS - Don’t forget to give feedback for next year’s IFComp!

I’d love to see that! I was actually wanting to review just the coverart this year, but unfortunately didn’t get time to do it. There were some great examples of art in this year. It’d be great to reward effort into putting together coverart as well since that’s not really judged at the moment.

I like the idea of a cover art side contest.

A better but still simple method would be to use the same 1–10 rating scale as the main contest. To eliminate bias caused by the order the covers are shown in, they should be shown in a random order (preferably personalised for each judge).

It will also be most fair if the judges (i.e., those judges who choose to also judge the cover art contest) rate all the entries. Here, in contrast to the main contest, you don’t have to take time to play a game for up to 2 hours; you just need to take a quick glance at the cover art.

I don’t know when the covers are ready, but if they are ready some time before, I guess it’s possible to run the cover contest in the week leading up to the IF Comp, as a type of warm-up?

Other issues: What exactly should we be judging? Is it the quality of the cover art removed from all context? Some covers may be excellent, but you only understand why after you have played (and finished) the game. The cover might refer to aspects of the game that only become clear when you are familar the game’s content and style. Or should we be judging the cover art with some context, e.g., with access to the blurb or the game’s title? (BTW, how about a blurb side contest too?)

I think I would prefer a cover art side contest where we don’t have to have played the game, but the title should be shown (it’s often embedded in the artwork anyway), i.e., the cover is shown with some, but minimal, context. Then this really becomes a ‘judge the game by its cover’ contest. How well does this cover art work as advertisement for the game?

A cover that is a detailed, beautiful painting might be expected to get a high rating: 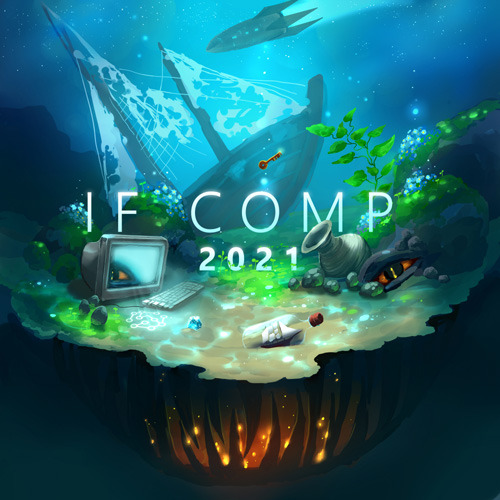 But so too might a very simple drawing with a lot of style and personality, that makes the viewer (judge) want to play the game: 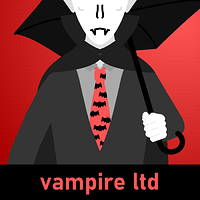 I’m just glad it got mentioned in a thread with other clearly more detailed and evocative covers.

I don’t know when the covers are ready, but if they are ready some time before, I guess it’s possible to run the cover contest in the week leading up to the IF Comp, as a type of warm-up?

I’d be willing to accept a low placing, but if it’s pre-IFComp, I think it’d be important not to release results until after IFComp. That could put a thumb on the scale. Certainly having someone rate my blurb/graphics at the start of IFComp had the side effect of saying, hey, some information was helpful, but I didn’t want this. Because for whatever reason, I’m not good at putting what I want to say into pictures.

The idea of voting for the top 3 makes a lot of sense. I’d extend it to say Eurovision-style voting might work well. The only question to me would be, how many entries down could get points, and what would the minimum? E.g. with 71 entries we might vote for the top 35, with 50 it’s 25, and so on.

I think a weakness in this case is: a “nul point” score would be a lot harder to blow off ironically than at Eurovision. If you only had top 5, it might feel too non-inclusive, as there’s probably a pool of 10 that would get the votes. But with, say, 35 this year, getting nul-point could be more annoying because–well, I think even the bottom entries get in the comp get a 6 or so. Perhaps it could be opt-out. (Also, a confounder such as Walking Into it, which threw in cover art mid-comp, may be tricky to adjust for.)

I think this sort of mini-comp (blurbs/cover art) is a good idea because it encourages people just to vote, and it encourages us not to worry about parser vs. choice. The act of voting for something reaffirms that, yes, I would like to make time to play this thing.

It would be neat to iron out the details to ensure feelings are respected as fully as possible. But I say this as someone who probably wouldn’t score very high: I really, really like the idea, and it’s worth developing.