Computer Chess with IF Authoring Systems

Very off topic from IF, I’ve just posted this in the ZIL group on Facebook but I’ll post here in case anyone wants to chip in more generally…

I wonder how far you could program the Z-Machine or other IF “machine” (using ZIL, Inform, TADS, whatever) to play Chess? You’d have to keep an actual Chess board next to you for visualisation obviously, but that’s no different to the Computer Chess tournaments of old. Would you have each space on the Chess board as a room, or use tables, or both?

Tagging in @aschultz since he released two Inform chess games last year (one, two) – the implementations used smaller boards and a limited set of pieces to support more focused puzzles, rather than just doing a regular chess game, but I’m guessing it wouldn’t be hard to adapt to the plain-vanilla version. I think he used both rooms and tables but that’s just a guess! Oh, and he also included an ascii visualization of the board, no need to have a physical one handy.

(The games are really fun too, and I think didn’t get the amount of attention they deserved).

I think he used both rooms and tables but that’s just a guess! Oh, and he also included an ascii visualization of the board, no need to have a physical one handy.

In 4X4Q he used rooms, no tables.
I still had to get my board out even though the ASCII board was really useful, because that’s the way my brains work.

Would you have each space on the Chess board as a room, or use tables, or both?

And you wouldn’t need a physical chessboard: a 24 x 80 grid is plenty of space for a viable ASCII representation!

Microchess is only 1K on Sinclair.

All you have to do is create an array 64xN. Represent the board with string. Generate subsequent positions according to legal moves. Recurse into positions with good evaluation score. Repeat until memory/time runs out. Use MinMax algorithm.

That’s about it. Of course, it can be complex, such as iterative deepening, hash, or sophisticated evaluation functions.

Fantastic! I’ll check them out, thanks for the links!

To use the parlance of today’s kids… GlkChess just handed my ass to me! Impressive.

Well, now I’m more than a little embarrassed as FDE was entered into ParserComp! Sadly as many know I had to step away due to bereavement (on top of an already rubbish year) and so I have to admit that I didn’t even get to play many of the games.

You’re right though, this looks like a cool little gem of a game! As I’m in a chess mood I’ll give it a good play!

I’m also thinking it would be fun to see different Chess games pitched against each other in a gritty winner-takes-all! The final showdown between Inform and TADS - the battle of the ages!

I played a quick glkchess game on level one. It was really potent. I had to take back a couple moves. Turns out it’s based on Marcel Simple Chess Program. Yeah, that’s really potent. Good luck beating it, even on level 1!

I did manage to win a knight and proceeded to win the game via forced trading. It plays a bad endgame, but since it was level one, that’s understandable.

I’m also thinking it would be fun to see different Chess games pitched against each other in a gritty winner-takes-all! The final showdown between Inform and TADS - the battle of the ages!

Oooh, what about a Jam about implementing any boardgame in a parser system, including chess? Call it the “>ROLL DICE Jam” !

Oooh, what about a Jam about implementing any boardgame in a parser system, including chess? Call it the “>ROLL DICE Jam” !

It’s definitely different, interesting and fun! If I hadn’t just handed over the reigns for ParserComp due to health fears I’d be all over it! It wouldn’t take too much effort for someone to run… Here’s hoping someone may take up the mantle.

What sparked this off was my watching Computer Chess for the 10th time, it’s a weird little indie film - a sort of mock documentary - that’s set circa 80-82 (by my rough estimates). Definitely worth watching but a little weird. 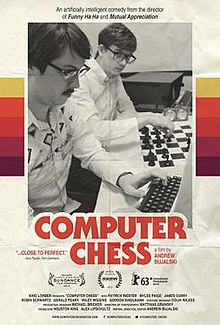 Computer Chess is a 2013 independent comedy-drama film written and directed by Andrew Bujalski. The film premiered at the 2013 Sundance Film Festival, where it won the Alfred P. Sloan Feature Film Prize, and subsequently screened at such festivals as South by Southwest and the Maryland Film Festival. It is Bujalski's second black-and-white film, and was shot with analog videocameras. It is more improvisatory than his previous films, with only an eight-page treatment for a script. Bujalski also c...

For board games, I think Point and Click is better fit. 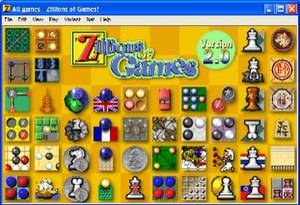 Zillions of Games is a commercial general game playing system developed by Jeff Mallett and Mark Lefler in 1998. The game rules are specified with S-expressions, Zillions rule language. It was designed to handle mostly abstract strategy board games or puzzles. After parsing the rules of the game, the system's artificial intelligence can automatically play one or more players. It treats puzzles as solitaire games and its AI can be used to solve them. The scripting language of Zillions-of-Games us...

Just want to pipe up here and say some of us have been working on board games authored with non-parser tools for a while now.

Just this month, Choice of Games published my version of Senet (also goes by other names like The Royal Game of Ur), the oldest known board game in the world. Even Tutankhamun had one in his tomb

Senet’s probably the most fun board game I’ve ever played, but I definitely wouldn’t recommend using ChoiceScript to author a chess simulator

You have four stats: diagnol, straight, jumping, and castle…

Only peripherally related, but I did this for a April Fool’s joke a few years back: Announcing LcZ, the world's first neural net based chess engine and interactive fiction amalgamation. - Leela Chess Zero