I 'fess up, I’m slighty drunk, but what about this little piece of code ?

whose ought to be, an actual readme for the story ? or is unfair to the player 'cuz he expects the PC’s description, esp. in the standard I6 vocabulary ?

So, you’re suggesting getting rid of the ‘read’ verb completely, except that “read me” would show an About text for the game? And then you need to tell the player that “read me” is used to access the About text, because no one will guess it.

I can’t see why you would do that.

If you’ve come up with this great idea, write it down and save it. Read it again the next day and if it still seems a great idea, then post it.

(I learned this the hard way)

In other words: Don’t be daft. If you drink a draft, don’t post your draft.

naaah… There’s a slight messing (and the presence of an < omissis > should have pointed to it…) because I ought to have fully copypasted… what I have done is actually:

so, no fully elimination of “read”.
(sometimes I put notes in a readable “Imp’s notebook”, then, aside alcohol, I realise that certain metacommands like about & similiar can actually be integrated into the story world via written objects, and from this idea, I noted that the use of readme files is nearby a given, and hence that “readme” is a valid synonim for ABOUT, then I noted that read me is also a somewhat logical input)

Alcohol, in the right quantity (after all, for obvious reasons, one can’t be much drunk when typing…) is a good brain lubricant, if coffeine is its fuel.

At this point, I must point to a compact but renowned italian beverage: the espresso corretto, that is, Italian espresso with an addition of alcohol (most used, the anice or one of the many “amaro”)

Surely I can’t be the only one who immediately thought of this, though? 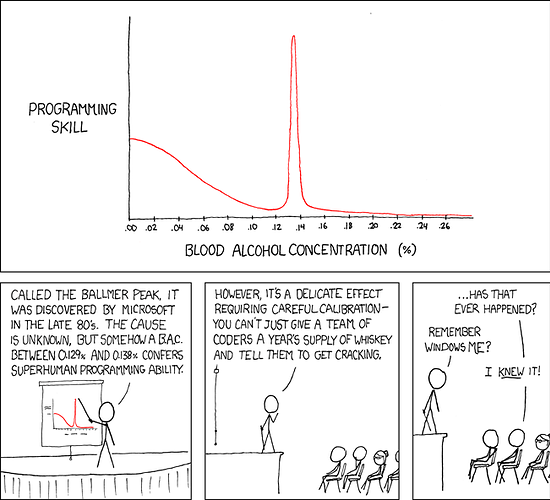 Ought to be named “espresso corretto peak”

because seems that if an optimal peak exist, is around that Italian mixture of coffeine and alcohol

Ok, let’s move this thread into its proper category, that is, general/off-topic (albeit a case for authoring/general design can be raised…)

Using first would be clearer here:

Truly an Italian coder right there.