Just saw the trailer for a Netflix movie called Choose or Die and wondered if anyone has seen it.

From what I can tell, a “hacker” finds an old cassette-based text adventure game from the 80s with an unclaimed $100k prize, and then playing it leads to some kind of evil being unleashed, etc.

Haven’t watched the movie myself, but I’d really be curious to know how the (three official) writers came up with the idea - from past personal experience? Or perhaps some kind of collective cultural memory?

Anyway, “congrats” to Netflix for this very on-genre movie

Choose or Die began life under the title Curser (spelled CURS>R) back in 2019. When it was first announced, the project was envisioned as a “short form” series for the ill-fated Quibi streaming service that folded less than a year after its launch with Ridley Scott serving as a producer through his Scott Free label. When Quibi folded so too did this incarnation of the project, but while Ridley Scott dropped out as a producer, UK company Anton relaunched the project as a traditional feature film with director Toby Meakins and writer Simon Allen still involved. The film marks Meakins’ first feature debut, as well as the first feature writing credit of Allen who’s better known for his TV work such as BBC’s The Watch or The Musketeers.

I’ve seen various retro community groups unimpressed by the fact the evil game code was able to run of various systems, without modification, so easily.

Podcast interview with Simon about the film…

Here’s a written interview as well… 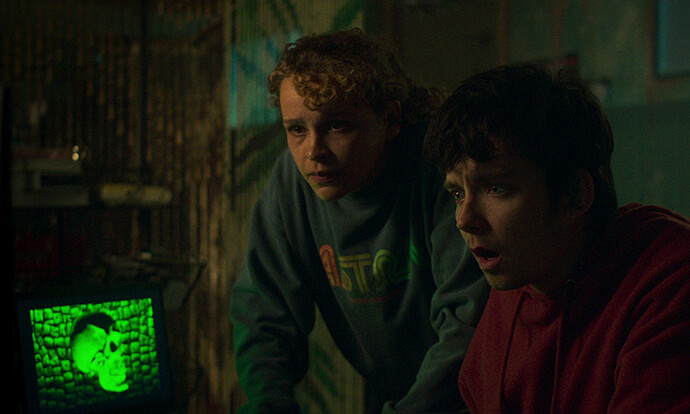 Choose Or Die: F*ck the Eighties!

We speak to director Toby Meakins and writer Simon Allen about their new horror movie Choose Or Die and why we should all f*ck the Eighties...

I did, I even set an reminder to what it when came out

I can say, I was disappointed because I thought the film was interactive… I even created a little review

Choose or Die began life under the title Curser (spelled CURS>R) back in 2019.

Well of course, anybody who’s spent any time pulling out their hair while debugging code surely knows about the deep evil that lies therein.

Thanks for the link as it explains just what a moron the director is:

Simon Allen: There are so many embedded structures, presumptions, and power influences systemically, that I think that it was really important that she [the “hacker” in the movie] was a female character. I think there’s something about when she turns around to Eddie and says, “fuck the Eighties”. I would have called the film ‘fuck the Eighties’ if I could have gotten away with it [haha].

I think there’s so much power and primacy in that statement, because it’s almost a form of heresy when you look at gamer gate and toxic fanboys. It’s so bad, the misogyny in that situation.

Clearly, he has no idea what the “gamer” (a term not invented until much later) situation in the 80s even was. I spent plenty of time in video arcades in those days, and I never once heard anything remotely misogynistic, and this is an era where we called each other f—g at the drop of a hat. Arcades were for everyone.

Maybe he should do a little research and watch movies from that era such as Joystick (1983) or The Wizard (1989) with Fred Savage. They’re not great in terms of being movies, but there are plenty of female gamers in there.

Last but not least, Gamergate took place thirty friggin’ years after Zork was published. Glad to hear this movie is trash after reading these interviews.

It does sound a lot like a less interesting, non-interactive Bandersnatch.

It’s not actually set in the 1980s! (which excuses some of the screenwriter’s comments etc.) Not a movie I’d watch (I don’t do horror) but it seems like a really odd mish-mash of very British things colliding with stuff that looks very American! (I remember having an argument with someone, wanting to launch a “classic adventure” magazine about its non-inclusive tag-line and he responded that, in his experience, girls didn’t play games in the 1980s… and this was from someone who was trying to set himself up as a text adventure expert… I had to point out to him that not only were many of the text adventure players I interacted with female, but also all my playtesters, most of my fanzine editors, and several of my fellow authors were too.)

Frankly, it appears that the team behind this movie are a bunch of idiots who failed upwards. First, their ridiculous short film got a lot of buzz, so somehow, they got a local British gov’t to finance “Choose or Die” which they then tried and failed to sell to Quibi (an epic disaster unto itself) but then increasingly moronic Netflix bought the whole thing.

Meanwhile, they shoehorned an entirely British cast into being fake Americans, and all along, they think that the 1980s were some sperg-ridden cesspool and/or the folks of 2022 are still caught in some endless loop w/r/t Gamergate from damn near two decades ago.

Good riddance to them all. About the only redeeming qualities of this entire mess are 1) the name CURS>R is indeed pretty cool and 2) someone really ought to make a proper IF game called “Choose or Die”

A choice-based version of Pick Up the Phone Booth and Die?