Choice of the Petal Throne: Rise to glory in Tékumel™!

We’re proud to announce that our newest game, Choice of the Petal Throne by Danielle Goudeau, is now available for Steam, iOS, Android, and Kindle Fire. It’s 25% off during launch week. 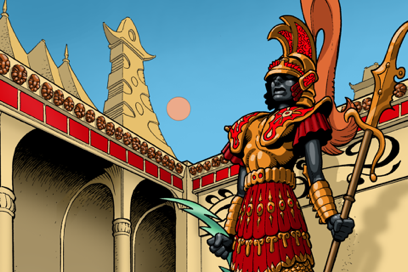 In the Empire of the Petal Throne™, will you find glory, or a knife in your back?

“Choice of the Petal Throne” is a 124,000-word interactive fantasy novel by Danielle Goudeau, where your choices control the story. It’s entirely text-based–without graphics or sound effects–and fueled by the vast, unstoppable power of your imagination.

M.A.R. Barker’s world of Tékumel™ is a fantasy universe like no other, where South American, Middle Eastern, and Indian cultures collide. The princes and princesses of the Tsolyáni empire vie for their father’s mystical Petal Throne, tearing the nation apart with civil war and political intrigues.

As a captain in one of their armies, will you play as male or female, gay straight or bi? A brave and forthright soldier, a hedonistic intriguer with a heart of gold, or scheming double agent?

(Tékumel™ and Empire of the Petal Throne™ are trademarks of M.A.R. Barker and are used with permission of the Tékumel Foundation. For additional information, please visit tekumelfoundation.org.)

Tékumel is an amazing setting that encapsulates both the history and the future of table-top gaming. Published in 1975, it blends sword and sorcery, dungeon crawls, war gaming, and meticulous detail with a non-Eurocentric setting, alternative sexuality, and a role for women that manages to be empowering while not blithely ignoring historical reality. Because of this, it lies at the intersection of both the Old School Renaissance movement, and the call for more diversity in gaming.

There is so much to love here. The human society, drawn from India and South America, eschews the standard rugged-individualism of most adventuring parties for a world in which every PC is caught in a web of obligations between their family, their clan, their temple, and their career. The morality springs from an honest exploration of what it would be like for humans to live in a world where incomprehensible omnipotent gods interfered in daily life. The alien races are truly alien, not just humans with some features changed.

What I love most, though, is that this game, the first published RPG setting, has so much of what I see people calling for in modern games. Not just that the PCs all have black hair and brown skin and don’t live in Ye Olde Europe. Homosexuality and bisexuality are discussed openly in the books and accepted within the cultures, as is polyamory. The role of women, is in my opinion, portrayed brilliantly, with women pressured into traditional family roles, but legally allowed to declare themselves the equals of men. This lets me play the female general, governor, or bad-ass scholar-priestess, while showcasing the more rigid gender roles in historical societies.

For all these reasons, and because any game with a table discussing regional variations in architecture is just awesome, take time this year, on the 40th anniversary of its publication to play some Tékumel. Find a game at your local convention, or buy a source-book and run a session for your friends. Play it using Béthorm or Empire of the Petal Throne or your rules-light system of choice. See where our roots are as a hobby and think about where we’re going.

Choice of the Petal Throne is not showing up on new releases at Steam. I don’t mean ‘popular new releases’, I mean the list that has all of them.

You can search for it, but otherwise it is invisible.

Also, you might consider trying to get Choice of titles on the “Upcoming” list – even just a few days before, because some people look at those and it is a good chance at additional eyeballs.

While I’m at it, an additional Steam sales strategy you don’t seem to be using is the “recently updated games” list. I seem to remember you’ve done a couple updates on games but I’ve never seen one of those updates pop up on the Recently Updated stream. That particular stream – by the quirk of the main Steam page’s odd design – is actually visible from the top page. I often see – and more importantly, click on – games I’ve never heard of mentioned in the updates.

Even if you don’t do a technical update, a strategy guide or addition of Steam cards is also an occasion for using the Updated Games list.

Choice of the Petal Throne is not showing up on new releases at Steam. I don’t mean ‘popular new releases’, I mean the list that has all of them.

My understanding is that there’s no unfiltered list of all new releases any more. You have to reach a certain minimum of popularity in order to get onto the new releases list at all. Then the “Popular New Releases” list includes qualified new releases, sorted by popularity.

Re: “recently updated,” we’ve only done minor bug fix releases. You have to click a button saying that you’ve done a “significant” update to get on that list; they discourage exaggeration. Maybe the moral of that story is that we should plan to hold some content back and release it later, specifically so we can click the button, but but but I dislike that. :-p

There’s a tiny button labelled “All New Releases” below the main list. It is easy to miss. Here is a direct link to the Windows version.

Fortunately, Petal Throne is there now. There must have been a delay.

(One other option is to install the very popular Enhanced Steam extension to a browser, which will add a new releases tab.)

I was never quite clear on the scale of your bug releases, and no, I wouldn’t withhold something just so you can advertise you fixed it. However, something like Slammed (if it had already been on Steam) would have been good to put on there as adding new endings/content.

Yeah, I claim that list isn’t really “all new releases” any more, and hasn’t been for a few months; only just now are we popular enough to participate.

Yeah, I claim that list isn’t really “all new releases” any more, and hasn’t been for a few months; only just now are we popular enough to participate.

Given it is possible (if you’re, uh, a little obsessive) to get details via alternate sites/plugins, yeah, it’s the real list. It’s just nobody (in relative terms) is looking at that list. It’s rather hidden away there.

How would the other sites even know about new releases that weren’t on that list?

It’s possible to access the Steam database w/o using just what the website says off the list. (Installing Enhanced Steam on a browser is probably the easiest thing if you want to muck around.)