A quick word about me: I don’t play much interactive fiction but I enjoy it occasionnally. This means I’m bad at it and often won’t be able to progress in a game at reasonable speed so the two hours limit will cut me really short for many games I guess.

Anyway I’m really excited about IFCOMP 2022 and want to thank all authors who contributed an entry! Unfortunately I don’t have it in me to write a full review but I’ll try and drop some quick thoughts about the games I play, in the hope that these will be interesting to the authors or anybody else.

My first game was Tower of Plargh.

This is a very minimalist game with no story as far as I can tell (I got stuck really quickly), no hint system and no walkthrough. You are in a closed environment and are presented with a series of puzzles. I was able to solve the first three puzzles and got stuck on the fourth. The solutions to the the first puzzles seemed a bit random to me. I didn’t notice anything guiding me towards a solution it was just trying more or less random things.

Also I felt that it lacked polishing. Some text had typos, and things that were there could not be examined (the monkey) which did not help with the overall experience.

I really enjoyed this one! My first impression was delight. I found the setting with robots really cute, and I was really intrigued and liked the fact that there are so few commands available.

Exploring the small world and solving the first easy puzzles was much fun. My enthusiasm waned a bit later on because it seemed to me that the solution to some puzzles was a bit random and was obtained by trying everything, but maybe that was just me not paying attention (notably attract a robot to a room where you need it to hold a handle by carrying a square plate), but some of those seemingly random ones where also really fun (jump to stuck your head to a magnetic rail to get carried to another room).

Also it feels really polished and the interface is a joy to use.

All in all a very enjoyable experience.

If you liked the robot setting I highly recommand reading the following short-stories:
Fandom for Robots by Vina Jie-Min Prasad 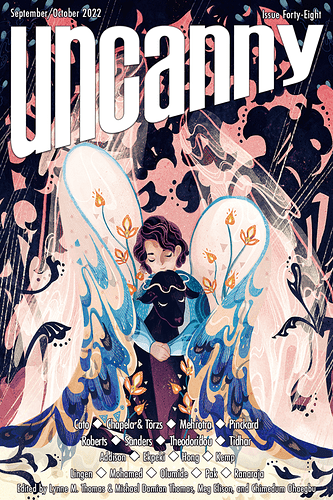 Computron feels no emotion towards the animated television show titled Hyperdimension Warp Record (超次元 ワープ レコード). After all, Computron does not have any emotion circuits installed, and is thus constitutionally incapable of experiencing “excitement,”...

Bots of the Lost Ark by Suzanne Palmer 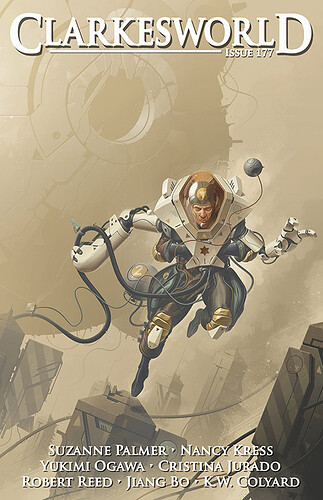 Clarkesworld Science Fiction and Fantasy Magazine and Podcast. This page: Bots of the Lost Ark by Suzanne Palmer

This was my first exposure to the Texture system where you have to drag boxes to highlited text to progress in the story. I can see the appeal of this over clicking on links (imagine having three boxes and three highlighted text parts, that would require 9 links!), but the problem with my browser (vivaldi) is that the text in the box was really small and difficult to read.

The story was interesting, and rather well written though at times it felt to me as if the author tried too much to be litterary rather than using a simpler style. It was mildly confusing at times (I remember a time when I was wondering whether there was a second letter that had appeared).
I played two times and reached the same ending and was mildly disappointed by that, because I had deliberately chosen very different paths. I am not a completist and I did not play again to see if it was possible to reach a different ending.

Woah. I don’t play much IF so I don’t know if the approach taken by this game has been done to death or not but to me this felt really original and the way the story is revealed made me really connect with it.

My initial thoughts were that it was very well written but not really interactive: the only choice presented is to choose a date among several highlighted on a calendar. Visiting dates out of order led to partial reveal but it was not clear to me that my choices had much impact as it seems to me that eventually you get to see all the text in all cases (I might be wrong about this).

And then something happened. The way the text get rewritten from 3d to 1st person before my eyes was completely mesmerizing and had me completely hooked. The story still didn’t feel interactive but suddenly this was not a problem any more and the way the story was presented to me made me connect to it much more than if I had been reading a short story.

I’m still not sure exactly what happened in the story as there are many gaps bewteen the dates. I’m sure this is intentional and the vagueness somehow adds to the emotional impact the story had on me.

Not being in a native English speaker, I think I’m not in the target audience for this one, which probably explains much of my confusion.
I spent the first 20 minutes completely lost. I didn’t understand what I was supposed to do. I didn’t even understand how to use the walkthrough correctly!

For me this game would have greatly benefited from a short in-game tutorial, explaining in plain English what you are supposed to do and giving a few examples. In particular the sentence “You often need to riff on the room name” was not clear to me until I managed to get what I was supposed to do.

I was able to find three rhymes and was delighted! But then it was so hard. Part of it is due to my non-native-Englishness, but I suspect even native speakers will struggle to find that “Bussed back” must be used to move “Just Jack”.

I can see how it would be fun play this one for very short intervals, again and again over several days, letting the brain work in the background to try and find new rhymes, but for me that’s difficult to do in a comp where I’m on a timer. I might do that after the comp though.

Other thoughts: I did not understand what the sounds command provided. In particular I do not know how to find in the list the sounds of “Done dorm” (which is one I was able to find by myself).

I did not understand at all what the pair of numbers on the leet learner mean.

Thanks for this! Yes, I realize how tough it could be for people without English as a first language, even people who know it well. There is some slang. Part of me was wondering if I could/should find such a tester, but part of me realized how much work it might be for them not only to figure the puzzles but also wrangle with bugs.

(Also, I’m conflicted between wanting to see this sort of game in a foreign language and between realizing how hard it might be for me to figure out some of the words.)

For the puzzle in the track, it’s quite possible I didn’t have homonym detection for bust/bussed in place. I have homonym-detection in the core, but I didn’t rigorously put homonyms into my big table that assists the Inform parser. So that feels like a worthy bug-fix update.

I definitely want to clean up the sounds command if it’s unclear, because it’s part of an extension that goes to Very Vile Fairy File and Quite Queer Night Near. I generally used it as a reference to parse through good guesses, and I thought “Aha! That’d be good to share with the player!” but then again, I kept it brief because it was something I’d seen before.

As for the leet learner? Well, I guess what the readings mean is a bit obscure. The functionality was something I put in relatively late. The tutorial, so to speak, explains the fractional values. But player/judge feedback suggests I haven’t highlighted it enough!