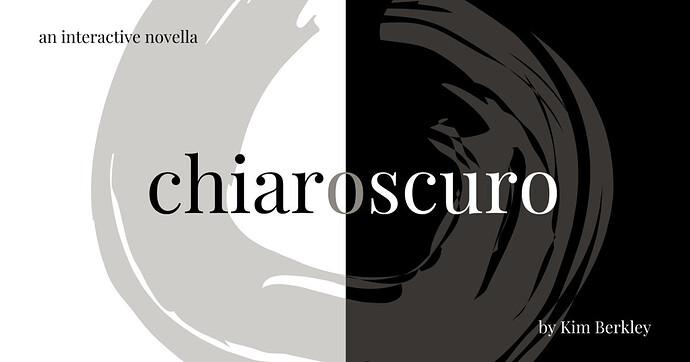 Hello, hello! Just popping in to announce the release of my new (free!) game, live now on itch.io!

chiaroscuro is a short interactive story about a young American artist who travels to Rome in search of inspiration and meaning. Instead, she encounters two strange creatures, one dark and one light, and must navigate her relationship with them while exploring the winding streets of the Eternal City.

chiaroscuro is a short narrative experience meant to be played in a single sitting, and it’s 100% free. Click here to learn more or to download your copy today!

Although I always feel these Twine games could benefit from being more interactive. I guess that’s Twine tho’.

And the character seems to be eating all the time. Not necessarily a bad thing though

Well, one does not simply travel to Rome and not eat all the food.

Thanks for playing. Glad you enjoyed it!

Thanks for inviting us to play this game.

First, the woman’s name is written “Felicita” when, in Italian, the word is spelled “felicità” because that accent mark is crucial. Also, I’ve never once in my life heard of someone with the name “Felicità” (happiness).

Second, the sentence “Meglio tornare indietro, che andare avanti in malo modo” feels like it was google translated. I didn’t get to any other Italian lines from this lady, but the usage felt clunky. Also, very few people in Rome actually speak textbook Italian. Most speak Romanesco.

There are a few other things such as the “nice-quality” TV, etc, and the somewhat confused geography of downtown Rome (i.e. the distances between the Fiumi/Trevi fountains which is 5 minutes on foot), but otherwise, it’s an interesting little horror story, at least the part that I saw.

Thanks for the feedback! I’ll have to fix that link if I can. I’m surprised about the Italian, because I had a fluent speaker check it for me, but I’ll take another look. (You’re absolutely right in that I don’t speak it myself.) The color seller is a little strange though, so she would not necessarily speak the most common dialect.

I’m glad you liked it so far though!

I’ve been enjoying playing through this; I like the emotional aspect of the story and the discussion of the character’s feelings about art and self-worth (I’m not done yet, though!)

Found a small typo, I think:

It’s hard not to stand among all that art—timeless works by the likes of Raphael, Titian, and Caravaggio—and not fall under its spell.

I think there should only be one ‘not’

To be honest, if your audience is English-speaking, it’s not that big of a deal. However, for folks who do speak Italian, it’s quite jarring.

Essentially, the Italian language is, more or less, not really spoken by everyone in Italy. That is to say, there’s an “official” Italian that you learn in school and hear on the news or see on a billboard ad, but there are only a few places where people actually use it in their everyday lives, and these folks are (mostly) in the northern areas, which are seen as snooty bastions of elitism by folks in Rome.

Likewise, there are also places where people speak a “hidden second language” such as Bologna and Venezia. These are “hidden” because they are no longer official but were once separate languages before Italy was united into one country.

Long story short, Italians are very, very sensitive to accent and idiomatic differences in speaking as part of their regional/local identities. Therefore, anyone FROM Rome would be using Romanesco not just because it’s how local speak but to distinguish themselves as “real” Romans, and not just folks from elsewhere in Italy who moved to Rome for school or work. Indeed, Italians have all kinds of colorful terms for people who speak with regional accents (Romanaccio is the insulting slang for how Romans speak, for instance, the term meaning something like “big fat ass Roman style”).

Sorry for the nitpicking!

Glad you’re enjoying it so far! And you are absolutely right, haha. I’ll make a note to fix that, too–thank you!

No worries, I appreciate the help! I usually set my stories in other worlds, so setting this one so firmly in the real world–and in such a specific place I’ve never been to, at that–was definitely challenging. I’m not surprised I missed a few beats, but I’m happy to have the opportunity to fix them.

I’ll definitely fix her name in the next update. I’ll probably remove/revise a few of the Italian bits as well. Thanks again for your feedback, I really do appreciate it!

FYI, Google’s Maps feature has an excellent 3D walkaround of central Rome that you can use no matter where you live

Oh yes, Google Maps is my friend. I used it for researching this story quite often, along with the VR version (since I couldn’t just hop on a plane, unfortunately!). For the Fountain thing, I imagine you were referring to the bit where she remembers that her uncle thought it was too far of a walk from the Fiumi to the Trevi fountain? I realized it was a short distance, but I also realize reading it now that I’ve made it sound longer than it really is—so I’ve tweaked that anyway, along with fixing Felicità’s name and removing unnecessary Italian sentences.

I really enjoyed this, for what it’s worth! Very evocative, and I think the two main mechanics played off each other well. I went back for multiple endings.

Wonderful! I’m so glad you enjoyed it. Thanks very much for your kind feedback!