I’m starting a chess thread here because there’s some interesting chess chats thingy in loungy area that will be deleted after 90 days, but I really wish it’d be preserved.

Anyway, I’m a Chess.com member and if you DM me, I’d probably add you as a friend, because my current one beats me without my having to be able to fight back whatsoever.

Here’s a sample of my latest game: 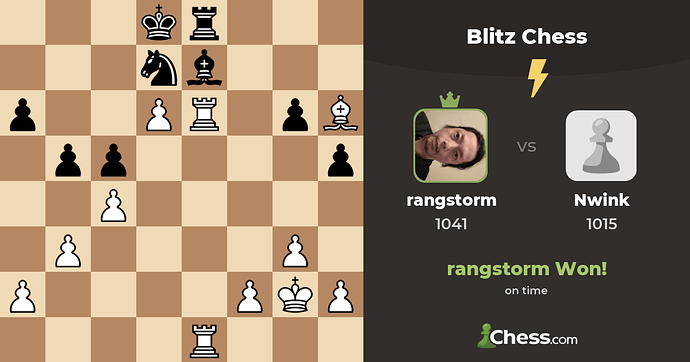 My quickest game was a 3+2 where I end up with 3:02 on the clock. That was interesting game.

I suppose one of my white whale project is a Garden of Chess game, but that requires not only I write my own chess engine, but also 3D graphic interface. In other words, not happening any time soon…

I’m on Chess.com too…

I have old accounts at chess.com and chessworld.com.

Im technically on chess.com too, but mostly to make use of stuff that requires an account.

For some reason, I get intense anxiety over the thought of playing another person in chess, so I usually fight bots.

(Which is similar to how I play RTS games, too, really…)

That knight sac was cute.

not only I write my own chess engine

Or interface with an existing open-source engine?

Unfortunately, I don’t have a chess com account at the moment, but if anyone’s on Lichess: pickalicious : Activity • lichess.org

That knight sac was cute.

I do have a few games with Brilliant moves.

interface with an existing open-source engine?

Part of it is due to the training sessions for newbie learning chess. Existing engines don’t allow for things like:

If it’s just another chess engine, it’d be boring, especially one that plays too strong. So, it doesn’t have to be too strong, but it has to be very flexible.

That was a nice tactic in the game against Nwink! It seemed like you always had a bit of a slight edge and then cashed in.

I’m andrew_schultz on chess.com. I’m terrible about adding people back, so if I don’t right away, don’t think I’m ignoring you.

A lot of my current chess.com friends came from actually just sending PGNs of aborted arena tournament games. It’s neat to have friends from different countries, even if we aren’t super close.

For some reason, I get intense anxiety over the thought of playing another person in chess, so I usually fight bots.

I understand re: not playing! I played too much during the pandemic and didn’t feel like I really improved. It’s tough to get that balance of playing and studying! Playing can be very stressful too, even if I fall back on stuff I’ve been playing a long time. I want to try to take interesting chances when i can.

The bots have gotten a lot better over the past couple years! For instance, Wally used to trade down into an endgame (often lost) when he had an attack, because he “liked endgames.” So that was a bit silly. The chess.com bots are making more and more human mistakes. But I wish you could specify openings to train against.

And yes when I just want to feel smart I beat up Nelson a lot. Anyone who wants tips to beat him, let me know.

The Coach Mae bot is interesting even though she hangs a piece after about 12 moves to “teach” you but unfortunately the upper bots are for paid members only! Guess I’ll have to wait until Black Friday when they have their promotion again.

Not sure how much y’all would want to read about study guides etc. (I’m more on chessable, which has a lot of free lessons chess.com doesn’t have.) But I’m willing to put out links and such.

Not sure how much y’all would want to read about study guides etc. 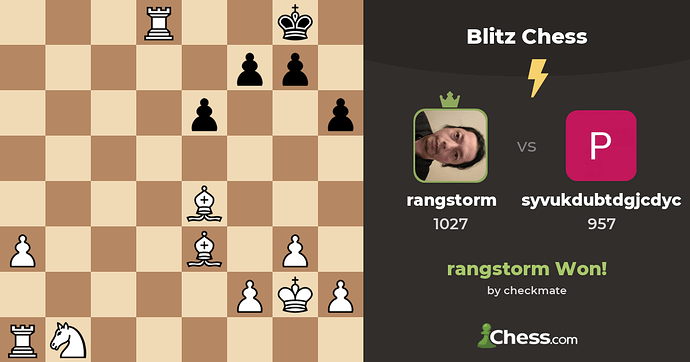 rangstorm (1027) vs syvukdubtdgjcdyc (957). rangstorm won by checkmate in 24 moves. Click to review the game, move by move.

That’s more in line with my preference. Also notice that my queenside rook and knight haven’t even moved! A quick and beautiful mini in less than 25 moves. A miracle occurred on move 14 and 15.

Yes, I’m not in the “learn an opening 20 moves deep like it was a school test where you’d forget it soon anyway to look impressive to others” school of thought either.

There are a lot of good free courses for middlegame and endgame tactics–I’ve been going through them. The paid courses obviously have more meat, but I’ll take annotations and a video from Yasser Seirawan, Johan Hellsten et al. any day. Technology, man!

I like the learning interface too. The idea of having something to pace your learning and focus on what you missed is neat, too.

And I agree it’s more than okay to have neat game with a lot of mistakes! Those happen even for titled players. But the best games give us something to shoot for. And sometimes learning a few opening traps helps us see how to catch opponents off-guard or make sure we aren’t caught off-guard. Or they can show us how to turn openings we thought were boring into something interesting.

One example might be, well, it’s a bit silly to learn Morphy’s Opera House game or Steinitz vs. von Bardeleben just to be able to rattle it off. But if you know why it works and the principles behind it, sometimes attacks can flow very naturally.

The most I’ve learned for openings is King’s Gambit on white, specifically because it’s fast and creates a 50-50 win chance. This doesn’t give the opponent a lot of room to pull a counter from theory, and gets the opening game over with as fast as I can.

I’d only look into openings to find stuff like this. Anything that’s reliable and 50-50 in a chess analysis engine is probably from the romantic era of chess, and I can’t imagine there’s a lot of hard counters.

A lot of the trading card game mechanics of openings likely come from when people were pulling stunts, and theorists had to find hard counters.

Of course I’m at ELO 800-ish, so this is probably unfounded lol.

EDIT: I have learned that the nature of King’s Gambit is a lot more aggressive than what I am comfortable playing with, and that I’ve misunderstood the opening. This might explain why I’m stuck at 800 ELO lmao

King Gambit used to be my goto opening, but lately I’ve switched over to KIA. Here’s a sample game: 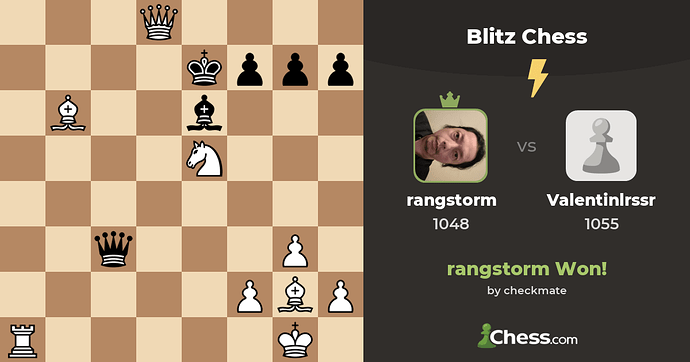 Yasser Seirawan called this Bazcra? Opening, except that one begins with 1 Nf3.

Yeah, that was a nice thumpin’.

I’d forgotten about Gideon Barcza. There are a lot of great old chess players who contributed a lot. The King’s Indian can be great fun to just build up a strong position against mechanical play, but it’s also fun to see Black’s plans in action.

Speaking of the KIA, I’ll take the time to show this famous game some people may know. Bobby Fischer was deadly with it.

Here is a link to the game and also to the puzzle position for the final move.

And since I’m here, I’ll throw in a bonus game: Andruet vs. Spassky.

Those who want the puzzle, click here. It may remind you of a similar game, where there was a spectacular sacrifice that was less necessary. Spoilering which it is, to make sure Andruet/Spassky isn’t spoiled too, but trust me, it’s worth it. Levitsky vs. Marshall, with the puzzle here. Black’s move is completely unneccessary, but man, it looks cool!

Brilliant! Is that the move of the century or something? Fantastic!

If it’s not the move of the century, I’d like to see what is.

It sort of floored me, but it makes total sense. Also, I’m amused how it cuts against the maxim “knight on f8, never mate.”. Okay, that maxim’s usually for black, but I think we get the point.

Spassky was/is a great attacker. With all the brilliant Kasparov or Ivanchuk games in the late 80s, this one maybe got overlooked.

27.5 million. That is how many games per day are being played on Chess.com by people who want to play against Mittens the cat. She is a chess-playing bot that people cannot get enough of.

I challenged Mittens the Cat to a game. I haven’t played in quite a while. We’ll see.

Mittens is pretty crazy. She’s apparently Stockfish with crazy unsound openings. There are some cool youtube videos of titled players losing to it, and there’s one where they pair Mittens against Mittens or Stockfish. Some wild games follow.

The “regular” cats should be a pretty good challenge, too.

Speaking of wild games, I ran across this fun one in the chessable.com training. It’s a free course about a blitz repertoire with 50+ variations.

Also, I ran across a really neat short course at chessable called “(Some of) the best chess moves of all time.” So if anyone is on there, it’s neat and quick.

I got frustrated with online chess several years ago. I am a modest player. However, when I would be near winning a game, many times the opponent would just never show up again. Frustrating. I quit going online and have very few options to play otherwise. My modest skill have gone very stale.

If you are interested, we are running an experiment on lichess, using a neural net chess engine to approximate human play. We are not yet there, but any feedback is welcome: https://lichess.org/@/LeelaLevel5/all

Sounds interesting. Will I be assimilated?