ChatGPT is a mostly bad tool for Inform 7 development

The few prompts I tried, all of which resulted in different degrees of success:

Although the code generated has flaws, it’s interesting that the natural language approach of Inform7 resulted in code generation at all.

It took six tries, but it gave me this almost working code today:

prompt: write Inform 7 source code for a game in which you are King Charles and can make a smelly fart

“King Charles and the Fart” by Anonymous

The story headline is “Royal Flatulence”.

The throne room is a room. “You are King Charles, sitting on your royal throne. The room is filled with the scent of royal incense, but something else is in the air… a smell that can only be described as flatulence. You realize it’s coming from you and you can’t help but let out a small giggle.”

The player is in the throne room.

To fart is an action applying to nothing. Understand “let one rip” or “release gas” as farting.

After farting:
say “You let out a loud and smelly fart, causing the courtiers in the room to gasp and cover their noses. You can’t help but burst out laughing at the absurdity of it all.”

The only changed required was to change “To fart” to “Farting”.

The last rule is amazing, both for it being able to come up with a condition like that, and for its understanding of the restrictions on constitutional monarchs!

This is still all a bit sorcerous to me. I suppose I understand it’s looked at a mountain of data made by humans already. That’s the source of most what it extrapolates, bending it to your entered subject. But then I have no feeling about where it gets other ideas. Whether they are independently modelled and applied, or if they’re still extrapolations of the same data pile.

e.g. As Dannii says, did it apply separate modelled knowledge about kings to make the last rule? Or is this a further extrapolation of things it’s seen in other Inform code? Or games in general?

More insight into what it’s really doing can be obtained from “near misses”. It appears to treat Inform 7 code as a linguistic style to emulate (screenplays being another), and is capable of remixing when extrapolating.

Give me an Inform7 James Bond adventure game.

License to Thrill is a game.

The story headline is “A thrilling James Bond adventure full of danger and espionage”.

The starting room is the Casino.

The Casino is a room. “You find yourself in a luxurious casino, filled with glittering lights and the sound of slot machines. A beautiful woman in a sequined dress approaches you, holding out a martini. ‘Welcome to the Casino Royale, Mr. Bond,’ she purrs. ‘Would you like a drink?’”

The woman is a person. She is in the Casino.

The player can talk to the woman.

After talking to the woman:
say “The woman smiles seductively and leans in close. ‘My name is Vesper Lynd,’ she says. ‘I work for MI6. We’ve received intelligence that a dangerous criminal is planning to use the casino to launder money. We need your help to stop him.’”;
move the player to the Underground Vault.

The Underground Vault is a room. It is east of the Casino. “You follow Vesper down a hidden staircase and into a subterranean vault. The air is cold and musty, and you can hear the sound of water dripping in the distance. In the center of the room, you see a large safe.”

The safe is an object. It is in the Underground Vault. It is locked.

The combination is an object. It is in the Underground Vault.

The player can unlock the safe with the combination.

After unlocking the safe:
say “You quickly enter the combination and twist the dial. The safe clicks open, revealing stacks of cash and a ledger detailing the criminal’s financial transactions. You take the evidence and make your escape, knowing that you have completed your mission successfully.”;
end the game in victory.

It must have been trained on Inform 7 code. I wonder where it got it; is it primarily Emily Short’s examples in the documentation? Some random guy’s github repository? I wonder if most of its examples come from one person, it would be interesting to see what it consumed when the model was being created.

It appears to be trained on early Inform 7 code, as it refers to “game” instead of story and ends the game “in victory”. Wouldn’t be surprised if the examples from the documentation were fed into its training set.

Perhaps you might think about constraining your efforts to a fictional constitutional monarch.

Is it possible that historical posts from this forum and other sources like it (like rec.arts.int-fiction or rec.games.int-fiction) were fed into this thing for training? Decades of coding questions and coding examples to pull from there from a wide array of applications.

Someone should try prompts like 'Pretend that I am asking for help on rec.arts.int-fiction. Some of the most prolific posters are helping me, and talking about the inform 7 games they created. What are they saying? Give concrete examples of each poster responding to my question and the games that they created."

Edit: I’d sign up for an account but I’m sure the only reason they’re hyping it up so much and dedicating tons of server time and forcing people to create an account and doing it all for free is because they’re harvesting something. I’m sometimes okay with that (I use random websites to resize my images and I used an AI art website for my ectocomp game) but this one feels especially weird.

I suspect they want registrations more for rate limiting purposes. It won’t be free forever, and they may slow down your access if you use it a lot.

I’m sure we’re giving it some good practice while generating lots of test data for them to analyze.

Ultimately, they want to sell tokens (I want to say it’s 3 characters per token) to people generating text, and I imagine there’s an idea of companies automating certain support/phone/etc functions with the tech. Or a “dumb” version of a research librarian to help people get started with research activities.

I think the primary driver behind these wide/public demos is developing visibility/sales/investor opportunities.

It’s not a non-profit organization anymore, although I think that their profitability goals are a long game.

ChatGPT is very cagey about its sources of information. It will deny knowledge of a source, then later mention it. It is especially resistant to questions about resources on the internet, so the RAIF question spawns a canned message. However, it sometimes volunteers information about online sources! When asked, more broadly, about IF resources, it has this to say:

There are many resources available for learning Inform 7, including online tutorials, books, and forums where experienced Inform 7 users can offer advice and support. Here are a few examples:

These resources should provide a good starting point for anyone who wants to learn Inform 7 and create their own adventure games.

e: that web address for the forum is not so good.

After a little tweaking (the original prompt sent them down a random path of random posters boasting about their fictional Inform 7 games; it missed the mark), I got the following response:

Has anyone asked it to design and code a puzzle? I’m having trouble with what language you would even use to ask it to design such a thing.

I present to you… the worst puzzle ever designed! 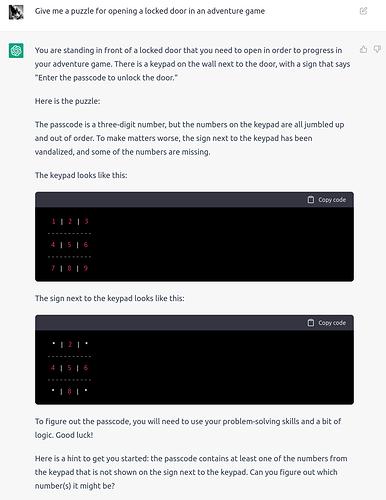 Interesting. Here’s a slightly better one:

Hey, are these entries in SeedComp? Looks too much like Cave Jam, IMO.

I suppose recursive implementation of these makes a game?

They’re overtly harvesting user criticism of the outputs. It’s easy to thumbs up or down the result, and explain why. That in turn can be used to improve their AI.

I corrected one output for a simple Inform 7 adventure to compile with modern code and properly leverage the door/lock paradigm of the language, and noted how linear the plot was, despite having two obstacles to surmount. I suspect linear narrative bias due to overall training. The GPT also does not appear to “understand” bidirectional connections in map directions as a stylistic constraint of “good” maps, given the omissions.

“The Adventure of the Lost City” by ChatGPT and a human.

[The original code from ChatGPT didn’t compile and had several errors. The source below has been fixed as per the apparent intent, based on the descriptive text prompts.]

The story headline is “Exploring a mysterious ancient city”.

The Lost City is a room. It is south of the stone door. “You stand at the entrance to the Lost City, a mysterious ancient city that has been lost to the world for centuries. The air is musty and the ground is overgrown with weeds. To the north, you see a crumbling wall with a large stone door.”

The stone key is an object. It is in the Lost City.

The player carries a flashlight.

After unlocking the stone door with the stone key:
say “You insert the key into the lock and turn it. The door creaks open, revealing a dark passage beyond.”;
now the stone door is open.

After going through the stone door from the Lost City:
say “You step into the dark passage, shining your flashlight ahead of you. You see a glint of gold in the distance and make your way towards it.”;
move the player to the Treasure Chamber.

The chest is a locked lockable container. It is in the Treasure Chamber. The matching key of the chest is the ancient key.

The ancient key is an object. It is in the Treasure Chamber.

The golden amulet is an object. It is in the chest.

After unlocking the chest with the ancient key:
say “You insert the key into the lock and turn it. The chest springs open, revealing a gleaming golden amulet inside.”;
now the chest is open.

After taking the golden amulet:
say “You reach into the chest and grab the golden amulet. As you hold it, you feel a sense of ancient power coursing through your veins. You have completed your quest and discovered the lost city’s greatest treasure.”;
end the story.

Pretend that I am asking for help on rec.arts.int-fiction. Some of the most prolific posters are helping me, and talking about the inform 7 games they created. What are they saying? Give concrete examples of each poster responding to my question and the games that they created.

“Inform 7: A Beginner’s Guide” by Aaron Reed is a book that provides a step-by-step introduction to Inform 7, with examples and exercises to help you learn the language.

This one’s fascinating, 'cause not only is that not the title of Aaron’s book, there is no “Inform 7: A Beginner’s Guide”: that’s an invention. Or, at least, I can’t recall anything by that title, and I have spent a lot of time trawling the web looking for I7-related stuff.

There are some titular near misses:

There’s even The Hitchhiker’s Guide to Inform 7, or at least a couple of pages on Jeff Nyman’s old website under that title …but of “Inform 7: A Beginner’s Guide”, there is none.

It’d be fun to see a similar game with ChatGPT, where you have a machine that pushes buttons, each one altering the prompt to ChatGPT, but you never see the actual prompts and have to reverse-engineer them from the output.

It’s good at approximating rhetoric by imitating conventions and using specialized vocabulary, but bad at distributing information. At least, that’s been my experience.

I actually think that its uncanniness is what fascinates a lot of people (including me). ChatGPT’s voice is almost human, which makes its errors and unexpected associations humorous/interesting.