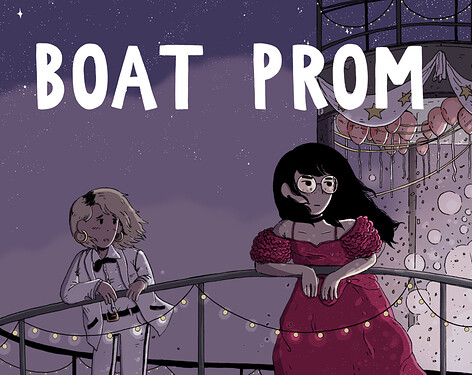 What’s worse than getting dumped by your pity date at prom? How about being stuck on a boat with him all night as he makes out with the girl you have a crush on? It’s enough to make Elizabeth want to jump overboard. But instead she’s trapped here at prom for the next three hours — and for some reason the annoying meddler who ruined her two best chances at love just won’t leave her alone.

Hey all! BOAT PROM is out now. It’s an interactive story about gay teens falling in love on a boat, featuring art by Beck Kubrick. It’s a short spin-off sequel to Birdland. (Because I figured, what better time to a release a game than right in the middle of IFComp when everyone’s distracted by a hundred other games?)

You can play it here: