Having Beneath Fenwick rank 25th out of 71 entries in the 2021 IFComp surprised me. It did better than I expected. The reason I was expecting less? The story. Particularly how it ended so abruptly.

The story for Beneath Fenwick was something I had been writing on and off for a couple of years. Believe me, there is a lot more to it than what was depicted in this entry. The problem was, I ran out of time. That’s never before happened to anyone in the history of deadlines, amiright? But more on the reasons why later.

I have an unstoried history with IF stretching back to the eighties. I wrote several mid-length games and published them through my own company with help from a good friend who was also in the fledgling game industry before we both got absorbed into Electronic Arts in 1988. Much later, I was contacted by this same friend to create an IF game for his new company. When that company closed, my friend gifted the rights back to me. This is how Beneath Fenwick got started.

By the time of this comp, I’d been writing and loving IF for a very long time. Maybe too very.

Beneath Fenwick started out as a parser game. For a long time, I didn’t really know what I would do with it. But then I was playing some IF on my phone, hating the experience because apparently typing with thumbs was a skill reserved for the young. I just wanted to tap, by gum! None of this fancy typing! I ain’t no city slicker’s secretary!

I’d seen some other attempts at creating mobile-friendly IF, and although I appreciated the efforts, they just didn’t seem like parser-style IF. That’s when the idea for Beneath Fenwick, and the code behind it, was formed.

I knew right up front if I turned this into a pet project to be designed and built from the ground up, I would never complete it. So, I looked for a good foundation to start with. Sugarcube 2 on Twine was where I decided to begin.

The development system for Beneath Fenwick consists of five components:

The preprocessor was something I added after I had completed development of the macro set that runs the game on Sugarcube. I created this mostly for myself because I have specific views on how I want my game source to look.

The IDE provided syntax coloring and some minor formatting awareness.

As a result, I was able to write my game in code that looked like this: 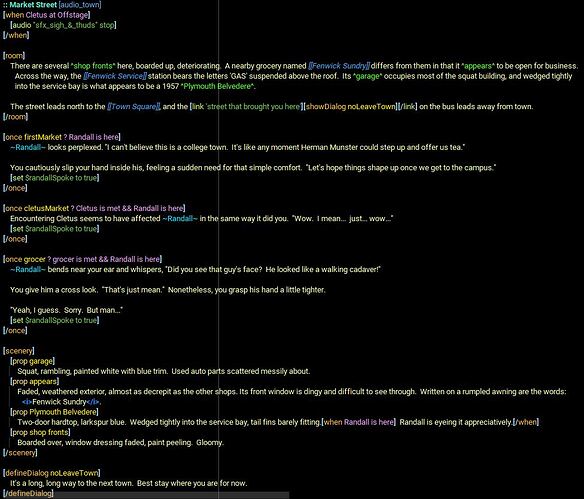 The system itself took about a year to build during my weekends and spare time – such as I was willing to devote to said Pet Project. I had to modify the game design to adapt it from a parser-driven style to one choice-driven. I resorted to the parser equivalent of “use item with item”. This turned out to be the greatest challenge, and where I feel I achieved only modest success. My plan going forward is to devise other screen-driven methods of object interaction, keeping in mind there is already a trend in parser games toward implicit actions (go north = unlock door with key → open door → go north). There’s a balance there somewhere… I just need to find it.

But that’s around the time when I began developing the story. Anchorhead was well-known by then, but remained set apart from all other works: a Holy Grail to be sought after by every other ambitious writer of IF.

My game-company friend urged me to give it a shot, so I went for it. So that’s where I began and how the story took off.

At first, the story was overwhelmingly Lovecraftian in tone. I honestly didn’t mean for Fenwick to become another Innsmouth, it just sort of kept edging itself in that direction.

Before I decided to make Jennifer the main protagonist of the story, it was originally going to be Randall. Randall Cartwright. Randolph Carter. Yes. Yes, I know. Despite the name change, he’s still what I imagine a young Randolph Carter would be.

I tried to fix it in preparation for this competition by removing every superfluous reference to Lovecraft and his universe that I could. No more references to Arkham. Miskatonic became Ealdian. Creeping horrors became snarky civil servants. I wanted to start with a low burn and raise the heat slowly, boiling the frogs/players before they knew what was happening. The game was still a suspenseful horror, just not quite gothic or obvious. Or so I thought. Apparently, reviewers here can spot something even remotely Lovecraftain from a mile off. Oh well…

But then, it was Suddenly September 2021, and I really wanted some exposure for my game. Not only the story, but to gauge a reaction to the interface I built around it. To that end, I got some good feedback:

That last item was especially impactful for me. I didn’t know whether I should announce my entry was actually Part One of a larger story. I felt that would have reduced interest. At the same time, not revealing it wasn’t exactly keeping on the up and up with the audience. I wasn’t lying to anyone, but I wasn’t revealing the full picture, either. Moving forward, I intend to be more transparent about such matters.

At the end of the day, this entire experience turned out to be helpful for me, and hopefully fun for a few reviewers and beta testers. I intend to complete the story and release the game in two or three parts, depending on how the story itself continues to develop.

Thanks to everyone who beta tested, reviewed, and even just played Beneath Fenwick for fun. It was an amazing experience!

CONGRATS, PETE!
I adored testing Fenwick. I really loved how you got the parser feel with a choice game… that is what it takes to get stubborn parser players like me to get excited about choice games. It was really well done, and I hope you keep working with this system.

I can’t wait to see what you do with Fenwick now. You must IMMEDIATELY send any new material to me to test. Um… I mean, please will you?

I have an unstoried history with IF

Uh-huh. This man is Snacky Pete, who made IF available to so many of us way back when. Unstoried, my foot.