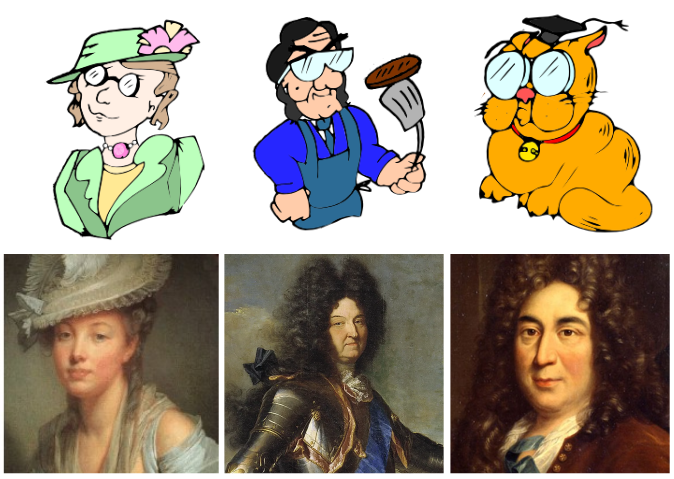 Five years ago, I published Dr. Sourpuss is Not a Choice-Based Game in Spring Thing’s 2016 Back Garden, and I thought I would explain the “true” solution to the game.

The True Solution Was Outside the Box

I intended to make a somewhat over-designed Twine game at a time when the format was criticized for its basically unappealing design: white text on a black background. I used color-coding, caricatures, and patterned backgrounds to represent three different characters.

My design was not as clean as a professionally designed website, but I think it did its job well enough.

Even though the game was designed to look appealing, it was also designed to give players no agency at all. Despite the story’s excessive surrealism, its structure is very linear. You are basically shuttled to the ending through three or four “locked doors.”

In that sense, the game is both winnable and unwinnable. You can solve the puzzles, but the game’s plot concludes with a recursive feedback loop of an ending. When the player “wins” the game, it is revealed that the characters created the surrealist fever dream that they reside in.

Meanwhile, the player is sent to the starting passage. They have the satisfaction of “solving” the puzzles, but they have not actually accomplished anything other than the instructions they were given.

Buried beneath all of that are several broken links.

I was thrilled someone almost noticed those for what they were. I recall that during a Twitch livestream that someone said: “Did the game just draw attention to its own broken links?” It did!

Each of those broken links contained variations on the words “Puss In Boots.” Nobody made the Puss in Boots connection, though, as far as I can tell. Even though the name of the story’s setting is, well, “Poisson Butte” and stars a cat. 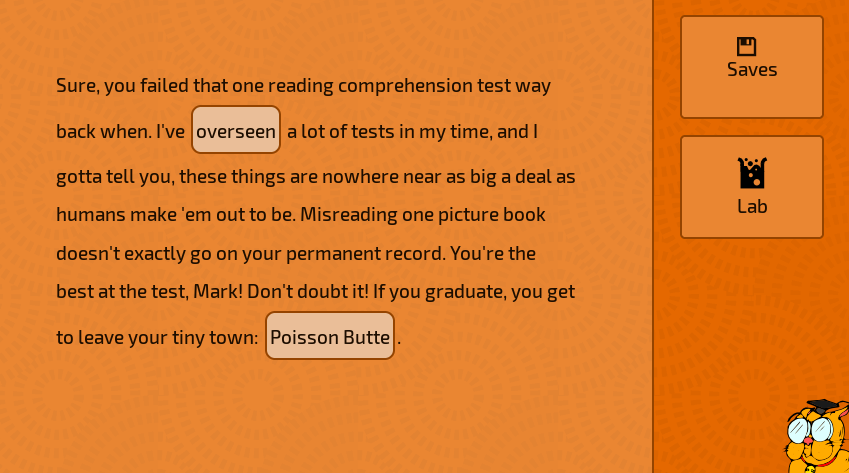 This “secret” solution was also the key to a more elaborate historical allegory, which was deliberately hidden due to the fact that it was much more obscure.

Most users on the forum are more active in the interactive fiction scene than I am, but I will give some context here anyway, in case someone else has happened upon this post.

Twine was (and is) widely seen as more accessible than traditional interactive fiction formats, which are played through a parser or a sort of command prompt. By contrast, most Twine games require players to do little more than make “choices” or click on links—something that is often criticized.

Twine was originally launched in 2009. Early works from authors like Porpentine (“Howling Dogs”) and Anna Anthropy (“And the Robot Horse You Rode in On”) often stuck close to Twine’s basic visual style. Despite their basic design, many of those works focused on gender and social politics; additionally, many of those games were praised for having creative structures.

Twine broke into the mainstream in 2013 with Zoe Quinn’s controversial “Depression Quest.” The controversy both created a backlash and a flood of Twine games.

There was some anxiety over whether traditional IF and Twine games needed to be segregated to preserve the old guard from a deluge of choice-based games, or whether the Twine avant garde needed to be given equal standing to traditional works for the sake of integrity.

On the flip side, Twine itself began to attract new styles that watered down its left-wing roots. 2014’s “Fear of Twine” exhibition by Richard Goodness was created specifically for those who saw themselves as outside of the Twine subculture. Independently, authors like Paperblurt (“Capsule II”) and lectronice (“do not forget”) created very flashy and very technically advanced works, but perhaps without the political teeth that defined early Twine games.

Sorry if I have painted either of those styles with too broad a brush. In any case, “Dr. Sourpuss” was a satire of interactive fiction’s social politics. I warped Twine’s politics to the point that they were not a satire about anyone in particular, only a satire of the political left and right.

Emily Short wrote in her review: “Tonally, this is a political cartoon at large scale — as implied by the cover art — one in which every character is a stand-in for some comically objectionable stance. For me, a little of that kind of rhetoric goes a long way, but other people’s mileage may vary.”

The fact that “Dr. Sourpuss” was a commentary on the politics of the Twine revolution was noticed by the handful of reviewers who commented on my game.

What I deliberately hid was fact that the characters were a stand-in for another literary movement—one that had nothing to do with Twine—that took place in 17th-century France.

The character of Marie was based on Madame d’Aulnoy, a baroness who became embroiled in a controversy involving opposition to the King’s taxes. She managed to escape capture and become an espionage agent. She was also a fantasy writer who coined the term “fairy tales.”

The character of Loudmouth Louie was based on Louis XIV, the “Sun King” who was highly interested in commissioning artwork and not so interested in politics.

In that light, d’Aulnoy’s work in the area of fairy tales was subversive. She hosted home salons in which her stories were told. Those salons were often led by women (though men attended). Salons were seen as an alternative to the more formal French courts, which eventually became quite exclusive.

There was a third element. Dr. Sourpuss, a maverick without loyalties, was based on Charles Perrault, who popularized the fairy tale format pioneered my Madame d’Aulnoy. He is the author of well-known fairy tales like “Cinderella,” “Sleeping Beauty,” and “Little Red Riding Hood.”

Perrault was a leader in a debate called “the Quarrel of the Ancients and the Moderns.” The Ancients, who opposed Perrault, argued that only time-tested works had artistic merit. Meanwhile, Perrault and the moderns argued that Louis XIV’s France was religiously and politically supreme. Therefore, Perrault concluded, the country’s latest works were superior to the classics.

As Wikipedia notes: “Perrault [had] on his side the Academy, the devout party [the Catholic secret society], the literary salons and a host of fashionable poets who are today almost completely forgotten.”

The Modernists gradually took over the French literary sphere; Perrault was patronized with pensions for “flattering” the government, and he became an important if obscure historical figure.

The Wikipedia article continues: Perrault’s work “reflects awareness of earlier fairy tales written in the salons, most notably by [d’Aulnoy] who coined the phrase fairy tale and wrote tales as early as 1690.” So while Perrault was willing to humour subversive artists, he ultimately was working to adapt their work to support his true loyalty, which was the French monarchy.

Or, maybe, if you hold the opposite political stance, Perrault was willing to kiss up for the king in order to generate material for the subversives that he relied on.

For example, d’Aulnoy adapted Perrault’s Cinderella into her own story following Perrault’s success. One commentary reads: “As the fair Countess does not neglect any opportunity of testifying to the popularity of Perrault, it is singular that she should have so boldly appropriated two of the best stories of a living author at a time when they were in everybody’s hands, and his fame in its zenith.”

So the relationship was not a one way street. And that was the basis of Dr. Sourpuss, the fiercely independent fact-cat who cared for nothing more than success.

Thematically, it went with the blurred political boundaries that were emerging: a backlash against Twine that ultimately popularized it.

The Moral of the Story

Dr. Sourpuss was not just based on Perrault himself; he was also based on one the central character of Perrault’s most memorable fairy tale: “Puss in Boots.”

The main theme of Puss in Boots is deception. In the original story, Puss tells his peasant master to go skinny dipping. In the process, he dupes a king into believing his master is a rich prince whose clothes have been stolen. In Dr. Sourpuss, the player surrogate character is an empty mascot suit that the reader is (hopefully) confused into believing is the greatest student of all time.

The finer theme is deception through validation of beliefs. In the climax of “Puss in Boots”, the cat defeats a shape-shifting monster by betting him that he is not powerful or skilled enough to transform into a tiny mouse. After the monster insists he can turn into a mouse, he proves it, the cat gobbles him up.

So, that is a theme in “Dr. Sourpuss” as well: the seeking of validation, and possible futility of it, the possible backfiring of it, for everyone involved, whether marginalized or powerful.

I think I finished the game at the right time. Five years on, the politics of Twine have burnt out somewhat, and there does not seem to be any feeling that traditional IF is still under threat.

While Twine continues to be popular among developers, most of the highest-ranking Twine games on IFDB are clustered between 2013 and 2016, and parser-based games still win IF Comp consistently.

If I had to guess, I would say that Twine games have found a niche on Itch io, which became more popular around 2016. Many of the Twine games from that site are still uncatalogued in IFDB.

On a personal note, the game was politically cathartic to me. I do not post very much online, and the few reviews that it received meant a lot to me. Re-reading it this year made me cringe at my political tip-toeing in the game, and it also made me laugh at my own very bad jokes.

It feels hilariously appropriate that, years after release, the author would suddenly drop a word-of-god bombshell that the game is actually an allegory about Louis XIV’s political influence over the French fairy tale. WTF in the best possible sense. Dr Sourpuss, it seems, can only get more ridiculous with age!

Oh my god I just looked at the IFDB page for this game again and saw that it’s now listed as “Episode 1 of The France Trilogy.” This just keeps getting crazier!

Thanks to my longest-standing fan, I guess

The “sequel” is far from a direct sequel, but I am looking for beta testers, if you are interested

Also, @CMG I remember when you published Taghairm and there was a meme going around where reviewers said it was a “game for people who don’t like cats.”

I was going to make the blurb for Dr. Sourpuss “a game for cats who don’t like people,” but I didn’t in the end.

Ha! The funny thing is that Taghairm was really more a “game for people who like cats.” I doubt it would work (if it works in the first place) otherwise. Although who knows…

I’m kinda busy right now, but I might be down to beta-test the next installment in the France Trilogy over the next few weeks. Drop me a private message!