Batman 66: An Action-Packed Interactive Episode, now on the IFDB!

With the Dynamic Duo nowhere to be found and super-criminals running amok, it’s up to you, citizen, to be Batman for a day and serve justice to those unscrupulous fiends. Explore key locations in Gotham City, match wits with Batman’s fearsome rogues’ gallery, figure out the villains’ clues, all the while trying to unravel the mystery of who you are and why you’ve apparently been tasked with saving the day.
Can you cheat death with naught but your wits?
Can you evade devious traps?
Can you save the Dynamic Duo before it’s too late??
Answers in one minute! But here’s a clue: the worst is yet to come…

Bringing Batman to the small(er) screen is the new Batman 66 interactive adventure! Prepare yourself, citizen, because this homage to the iconic TV series features the return of Gotham City, its Caped Crusaders, and their infamous rogues gallery, all in one electronic game! Explore Gotham from the Batcave to the infamous headquarters of the United Underworld, and brave the devious machinations and contraptions of the city’s foulest villains! For long-time fans and newcomers alike, this game is sure to return you to that colorful, absurd and wonderful world of Batman!

Try it out! Have fun! And if you’d like, leave a comment about your experience in Gotham or even about your memories of the TV series-- or any Batman property! Who’s your favorite villain? Which show/movie/book introduced you to the world of Batman? Feel free to share and celebrate these characters as we celebrate the release of the upcoming feature film, The Batman! 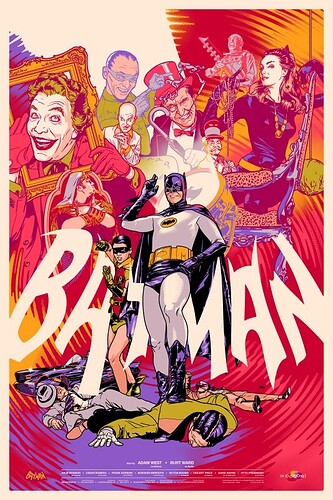 Fantastic cover picture. Sounds great, Is there a link?

Thanks for the correction, the link to the IFDB has now been added!

I’ll play this properly later. A couple of things i found already;

You cannot go bat poles I was most disappointed!

The bat poles were revealed already when entering the Study, but i could also press the red switch which told me the bookcase reveals the poles.

We played Batman 66 at the Bay Area IF Meetup today and we really struggled with it. We were unable to complete it, even after completely cheating on hints.

Here are issues we found:

I found a bunch of bugs in another Inform game this week, in Raygun Diplomacy, but in that case, the author made the Inform source available to read. That was helpful, because it allowed me to read the source to find solutions to bugs. I recommend publishing the source code with Inform’s “release website” feature.

I got stuck as well, a little farther on. Specifically, I couldn’t figure out what I needed to bring through the curtain in the Joker’s lair. (And I was unable to interact with some stuff in that room, like the chests, so wasn’t sure if I wasn’t thinking of something or if I was missing something I should have had.)

Batman 66 is a great setting for a game… the world is zany enough that IF-type puzzles fit right in, and the humour translates really well. (I particularly enjoyed the joke on how Batman must live in Bruce Wayne’s basement.) Watched a lot of Batman reruns growing up, so I’ve got a soft spot for the show… look forward to playing through a future release!

In the Joker’s Lair, you have to drop the rubber chicken and wear the Groucho glasses when you go west through the curtain.

Were you able to solve Catwoman’s lair? Even reading all of the in-game hints, I couldn’t solve get through the cat door.

Were you able to solve Catwoman’s lair?

Yes! You’re disguising yourself as the joker - put on the lipstick (acquired earlier) and the sleep powder (drink the coffee twice first) and the catnip (under a cushion on the chair)

Thanks. With that, I was able to “win” the game, but not fairly.

In the Acid Chamber, you can just get out of the glass box and go east with no need to think. That’s lucky, because I couldn’t figure out any way to use surfing skills or a way to solve the Riddler’s riddle about getting down from the mountain peak without equipment.

I am going to play this and I am very curious if >look at joker’s moustache works!

I beta-tested this game, or rather, I tried to beta-test this game, but I got stuck in Commissioner Gordon’s Office and was unable to progress any further. I did ask the author for a walkthrough, but I never received one, and now the game has been released — oh well!

I’d like to review the game, because the opening shows so much promise, but I’m still stuck in Commissioner Gordon’s Office. I assumed that I needed to ask the Chief the about the Art Institute and then tell him the solution to the riddle, which I’d worked out, but I couldn’t find a way to communicate it to him. I don’t know what else to consult the directory about or tell the Chief about.

Can somebody please put me out of my misery?

For all your public playtesting needs!

give note to bruce

show it to chief

chief, give me a match

get chicken [no need for the chicken]

wait (up to seven times, until the floor opens)

Sorry I’ve been absent for a while! I’d like to thank everyone for their interest in the game, and also apologize for any inconveniences-- as for the acid chamber, the way out is to examine the floor, examine the hinge, examine the wire, think, wait until the floor opens then slide down the wire. I hope that helps and I will begin work on improving the game soon!

Now knowing how to win the game, I have more feedback.