attempting to lift the limitations of the Z-Machine

I hit this earlier…

Packaging up for Release - Ran Out of Space
The application ran your source text through the Inform 7 compiler, as usual, and it found no problems translating the source. This process results in what’s called a story file, which is a program for a small virtual computer. Unfortunately, the story file for this source text was too big for that virtual machine: there’s just too much of it.

Inform can produce story files for several different virtual computers, and the one used by the current project can be selected using the Settings panel. If you are currently using the Z-machine format, try switching the project to Glulx format (you can make this change at the Settings panel), and limits like this will probably not bother you again. Although Z-machine story files used to be much more widely playable than Glulx ones, these days Glulx interpreters are widely available, so it’s probably not worth making big sacrifices to stay within the Z-machine memory size.

and I wouldn’t mind going to GLULX but when i do that i get … well, i’ll use pictures to show it. 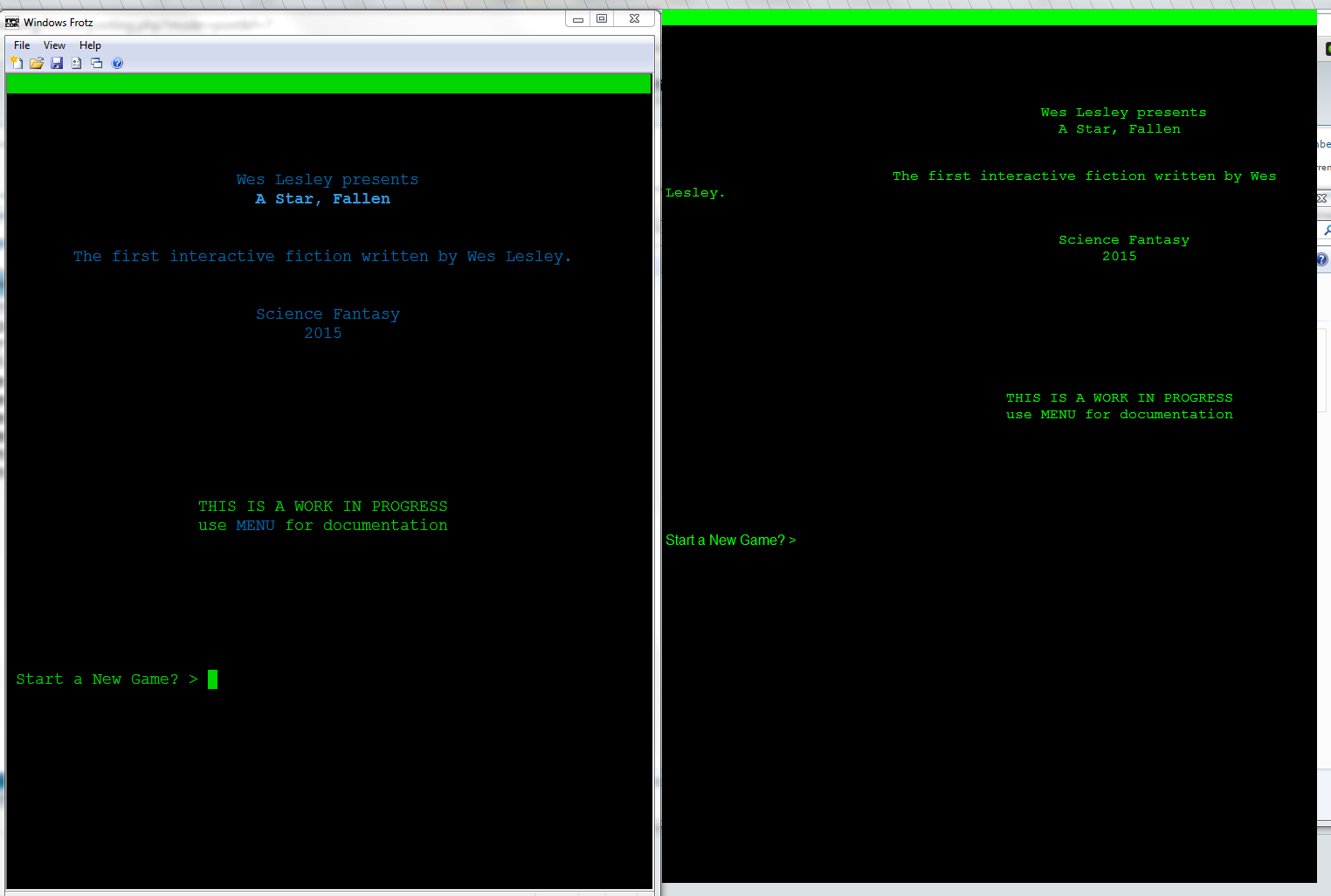 is there a way to save both color and the good centering?

because it looks horrible on glulx.

if possible i’d like to keep it in the Z Machine, so it is more portable. is there a way to override the size limit and keep going?

i barely have any code or story in my work, i’ve just bits and pieces that don’t fit together yet.

so Z machine is a genie. 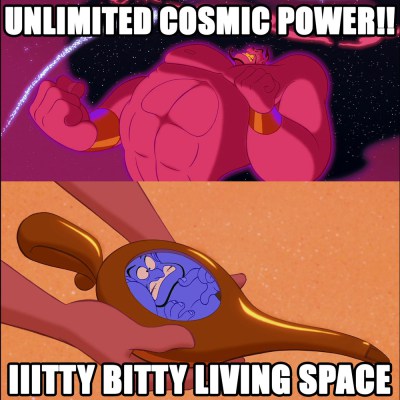 I’m not gonna lie. I’m super psyched about finally getting the hang of this stuff and then I bump onto this wall-of-nope looking ****. 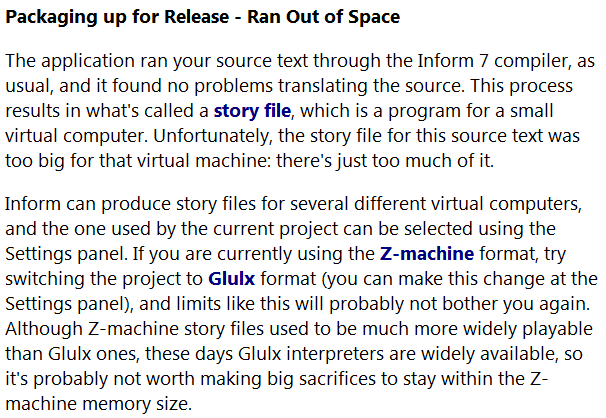 I’d so love a way around. but i’m gonna guess and say “there probably isn’t one, right?”

How exactly are you doing the centering? There are easier ways in Glulx, using text styles, but it looks like you’re manually spacing over a certain number of characters?

it’s messed up because the output is messed up BUT the Glulx (well, okay, GLK) built into inform does everything PERFECTLY. but the GLULX thing itself goes all wonky.

Use memory economy. Use MAX_ZCODE_SIZE of 100000.IF THERE ARE DRAWBACKS TO USING THIS METHOD I SHOULD KNOW ABOUT then please let me know about them because right now I think I’ve found a no-limit magic solution. Then again, if it was this simple the limit wouldn’t even be in place at all, right?

The limitation you hit is the Z-machine’s 64K RAM size, which is absolute. You cannot dodge it except by conserving memory in your game.

The “MAX_ZCODE_SIZE” option is completely unrelated to this stuff. It’s a limit on the largest single function that you can compile. Functions don’t live in RAM, you’ve never run into this limit, and anyway the default is 500000 so your setting line actually reduces it. Delete that line.

i have three rooms, 4 people that don’t do anything except are killable, unkillable, and killable that result in game overs.

i barely have any text. how can i hit the ceiling right now?

Like Draconis said earlier, the current version of I7 reserves a lot of memory.

so Inform7 can only make insanely tiny games for Z-Machine?

In the previous release of I7 (6G60), indexed text and dynamic lists were optional features, so you could write a larger Z-machine game if you were careful to avoid them. It would be a pain in the ass for someone used to the current language though.

well i shouldn’t complain about the ability to still create Z-games in I7 but then i’m starting to wonder, what’s the use?

also, why have all that functionality like color if it’s just… not useful?

i mean glulx doesn’t color. right? but z-machine i just [red letters] and bam. red letters. given i use that Emily Short extension.

any idea why the centering is off on Glulxe, as demonstrated in the above image? that’s frotz on the left and glulxe on the right.

ooh, while i’m at it, can configuration settings be hardcoded into the game, without the extra .cfg file? just curious.

It does - in fact, it’s much more flexible about color and styling than z-code - but the method for doing it is a bit different. See the Glulx Text Effects extension.

It does - in fact, it’s much more flexible about color and styling than z-code - but the method for doing it is a bit different. See the Glulx Text Effects extension.

but then I have at maximum two font settings, or can I add my own?

also, why have all that functionality like color if it’s just… not useful?

They put a color opcode in the Z-machine because, I guess, Atari and Amiga and C64 machines could display colored text. (The Apple couldn’t.) They didn’t put in font control or other typographical features – what we think of as the minimum necessary for text design – because nothing could remotely come close to supporting those features. (Until the Mac appeared, but that was never their primary platform, so the Z-machine never took advantage of Mac display features.)

'90s open-source Z-code interpreters supported the color opcode because Infocom put it in, so it must be important. Some IF authors decided to use it because it was there, so it must be worth using. Adam Cadre designed Photopia around it, and after that… you can name other games that notably relied on color, but you have to think about it.

any idea why the centering is off on Glulxe, as demonstrated in the above image?

can configuration settings be hardcoded into the game, without the extra .cfg file

I have an outline for how to do this, but I haven’t demonstrated it. Goes along with real typographical display features, more flexible styles, Vorple and Javascript integration, etc.

I’d love to start that conversation, but I won’t because I’m concentrating on making some money. (A radical theory which I haven’t been much in touch with since HL shipped.)

I’d love to start that conversation, but I won’t because I’m concentrating on making some money. (A radical theory which I haven’t been much in touch with since HL shipped.)

Anyway, I’m trying to get Glulxe to show me the money, but it’s giving me all kind of wonk at the moment. I’ll keep trying at times when i’m not so damn tired.
and i would love to have the ability to just set the font and the size. i’d not even dick around with the colors if i could have those two options all to myself.

Seqoe UI for variable and Consolas for fixed. i’m just saying. both of them 14 points. classy.

Nothing’s stopping you from trying.

And after your HL kickstarter success and subsequent success when it was released? Very likely, sir.

Well today I typed “andrew plotkin” into the search box on Patreon, as I sometimes do, and only got the usual three unsatisfying results. Which is totally fine I guess, I mean I guess they are trendy and all but probably it is still okay if not everyone has one. But I keep selfishly wishing that I would get a new top result and I would click on it and it would say something like, “Hi, I am Andrew Plotkin, I have created a crapton of stuff in the past, and I may well create more stuff in the future, and possibly this would be slightly more likely if you were to arbitrarily choose to give me money, but, like, no promises or anything. Also this is per month and not per thing.” And then I could sign up for like $2/mo or something. I know that’s not much, you would still need 249 people to do the same thing in order to hit $500/mo. Or maybe fewer people who were more rabid… or I mean, hmm, presumably the pledge amounts would form some kind of power law distribution, right? Because everything does? Is that even true? It sounds true. Does anyone know? Quick, zarf, create a Patreon and tell us the answer! Otherwise we will never know!!!