Anyone here ever try an all-text game with TextWorld?

It was the engine I used for my very first all-text DOS game. In fact, that was the very first DOS game I ever created.

It is VERY simple and limited, but there are a number of tricks you can use to allow it to do so much more: elevators, conversations with monsters, flying in a three-dimensional area, items placed that you cannot just take without searching first even if you know they are there, six+ lines for room descriptions, etc.

It’s a great little engine for quick but fun games, and if it can in fact handle 500 rooms they can be quite extensive too.

If I ever played a TextWorld game for MS-DOS, I wasn’t aware it was made by that system. I recall a lot of one-off text adventures floating around in the late 80s and early 90s, almost all shareware distributed in the BBS scene.

When I searched for TextWorld I found this unrelated project from Microsoft Research:

Looks like this was previously discussed here and here.

No, that is not it. It has the same name but is absolutely not the same one.

This TextWorld was programmed by someone called “White Divine” around 2003. Apparently it is an enhancement of something called CIA (“Create Interactive Adventures”). It was a truly limited system only capable of something like 35 rooms at most; TextWorld can handle 500. 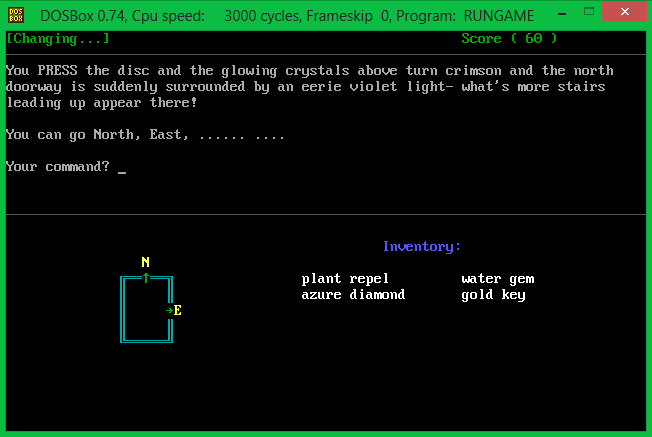 To be honest, from what I see so far with MS TextWorld the instructions are not overly helpful and the engine is not especially impressive. AGT has its quirks to be sure but it seems capable of more, just like TADS.

Rick Landrigan’s Squid Productions created CIA. They made a variety of other simplistic shareware “creators” for other genres such as point-and-click and RPGs.

CIA was discussed in this thread earlier in the year…

You asked about the CIA engine… Create Interactive Adventures! Squid Productions v. 1.0 Rick Lundrigan/Brian Bentley 1998 Shareware/Giftware Works fine in a DOS environment. This one works fine in DOSBox. Compiles to DOS executable. Comes with the games “Mayberry Mansion” and “A return to Adventure.” Limitations: 35 rooms 35 characters 105 inventory items (max 3 in each room) 175 player response routines (max 5 in each room) block any or all exits in a room scoring system, kill p…

I suppose @GusCE6 talk about this thing. Never heard about it, but looks easy to use. Is it freeware?

It could be. There is no charge downloading and using it, but if someone wants to sell games using it, that I do not know.

Believe it or not it is capable of creating better games than you might think in spite of its limitations- I figured out how you MUST search something to find something else, transmuting rooms, two-way logical room sequences, specific items, flying in an airplane or using a submarine in a 3D-environment, question/answer, and other tricks. AGT is much better, though. Textworld is great for creating simple but fun games due to its ease of use.

i found it in web browser mode

This worked in Browser mode, but the download DOS version said it was not compatible with a 64 bit machine. It definitely is vintage/retro and can work, if one has patience.

This worked in Browser mode, but the download DOS version said it was not compatible with a 64 bit machine.

You just need to run it via DOSBox, then it works fine on a modern version of windows. 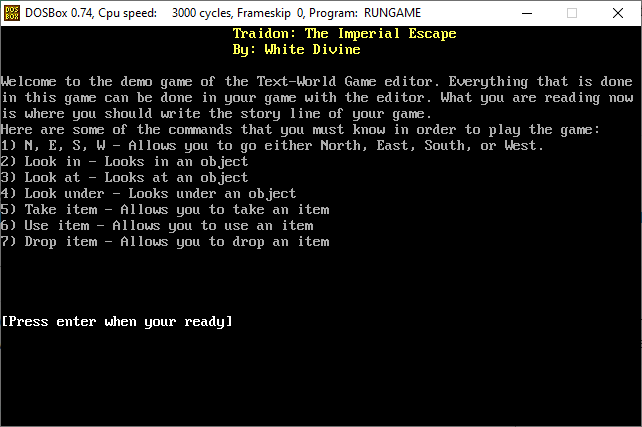 I ran it in DOS prompt, but either way, I;m not using it, just tried to find it for another user.

Yes, it’s nice to have a link to the file(s), so thanks for that.

Re. the other point… 64-Bit Windows doesn’t include MS-DOS. The Command Prompt may look like a DOS prompt, but it isn’t. DOSBox is an essential tool for anyone into retro text adventuring. I use it daily.

I cannot use DosBox on my chromebook. Something to do with mismatch cursor keys. I did a remap, but cannot run programs afterwards. Keymap change isn’t permanent, for some reason. So, no go.

I’d be interested in any details of other games written using either CIA or Text-World, to add to our collection tagged with that system over at CASA. At the moment we only have the three demonstration adventures…
http://solutionarchive.com/list/system%2C179/

The screen layout is fairly distinctive so should aid in identifying any games.