Some months ago I came across a DOS text game system called “TextWorld.”

It is simplistic in many ways, but it is also insanely easy to use- your average computer user can probably figure it out in about ten minutes.

It is capable of a good deal more than one might think by the use of some simple tricks and the fact is allows 500 “rooms,” but not long after I stumbled across AGT.

Pretty powerful and above all ACCESSIBLE, it is great being able to program DOS text games with Notepad++ and DOSBox. Heck, you can do this on a crummy 2006 Windows CE 6 Sylvania netbook.

I had programmed a game for a friend using TextWorld based on an anthro-character of his, and am now doing the same with AGT. What is delaying me is learning all I can about AGT and modifying the source code. I have managed already to do so with little knowledge of PASCAL, including statement changes and routine additions.

For example, I managed to create actual new meta-commands, in this case being able to change text colors automatically. This would enable keyboard character images to be different colors from normal, much like “SanctuaryRPG Black” (GREAT game!).

So- any other fans of that system? If so, what are you currently working on?

Also, when trying to compile the COMPILEB.EXE or regular COMPILE.EXE file using TURBO PASCAL compiler v 7.3.5 (with DOSBox) I get an “Internal Stack Overflow” error with COMMAND.PA3. I removed some commands I wouldn’t use but just the same I would prefer to know how to compile everything here. My online time is very limited so I can’t really look around for long, any help would be appreciated, thanks!

Ah, that’s how to post an image- this shows what those two extra meta-commands enable AGT to do. This image is based on the ASCII-style game “Stone Story RPG” from Steam- it is NOT of my own making, just a recreation to see what AGT can do. Images can be used for simple animation too. 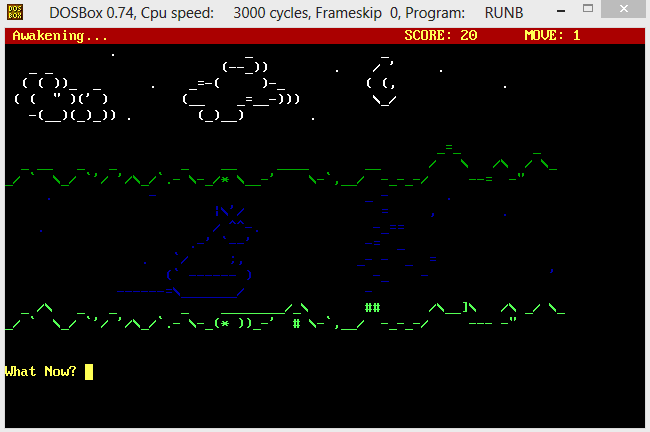 I recommend looking to Magx, an opensource evolution of AGT, available here on the IF archive.

It’s much better, named object, variables and flags instead of numbers, a more streamlined command language, and also capable of compiling legacy AGT sources (as those in the IF archive) in a new, monolithic and more compact, story file.

I’m a fan of AGT, in the same way that I’m a fan of the Scott Adams format. I wouldn’t mind creating a game with it, but after being spoiled with TADS and Inform, it feels weird using a more primitive language. I even took the time to build MAGX with MinGW. If only there was a way to compile the genuine article.
Also, I remember hearing from someone that there was an AGT version 1.8. Does anyone know if it was ever released?

If there ever was an AGT 1.8 then I never heard of it. There was an AGT Master Kit which allowed actual music and images (a bit clumsy but it worked), could that be it?

So far I’ve had no luck with the compiling problem, except to remove some of the meta-command elements. If anyone knows of a Turbo PASCAL compiler which you just drag and use on a DOS emulator that might help since I now have DOSBox-X.

Tell me more about your engine.

Another image using that text color change meta-command I added, this based on a monster from “SanctuaryRPG Black:” 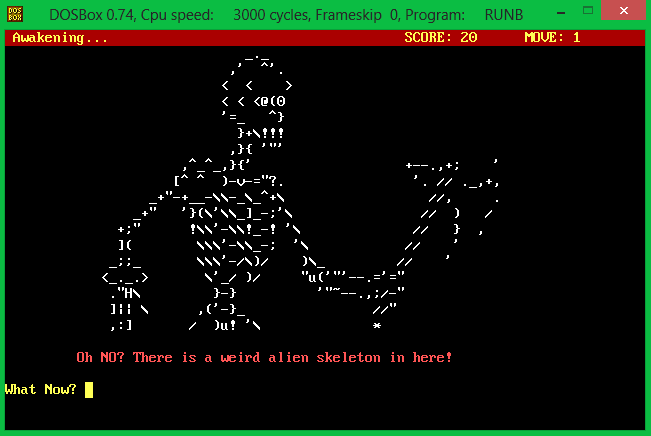 I’m telling you, the possibilities with AGT once I fully figure out the compile problem and how to program in specific preposition conditions…AGT will very nearly equal TADS in what it can do. That image above can have hit point and damage information updated in a steady manner. I’m still an amateur whom hardly knows PASCAL (beyond its similarities to Javascript and Commodore-64/Vic-20 BASIC), but already quite a bit has been done.

Guess the point is that AGT is so much more accessible than TADS or most others.

I have an attraction to AGT as a player, but not as an author. I don’t think any AGT games have been released for years. If you were thinking of writing a game in AGT, use Magx and compile to AGiliTy’s AGX file format.

I find the AGT ecosystem extremely confusing. There are so many versions on so many platforms and so many tools to contend with.

There’s plenty of AGT source code in the IF archive, but the level of readability is truly dependent on original author’s comments, esp. if the author don’t put his/her allocation & usage of the (numbered, not named…) flags and vars in the comments.

If I was to write an AGT game, I’d probably use the updated MAGX version. The syntax created for that particular version offers many options, including custom subroutines. For example, to change the color, I can use Agility color codes (as demonstrated here), and for combat I can use these units.

Problem is, while the routines I use for my AGT games are legal they do not work with Gargoyle or AGiliTy. You cannot even leave the first room as you cannot search the cushions.

MAGX will not touch my files. It always yields an error message, and for an AGX file don’t you need to use AGT Master Edition, not 1.7 or 1.7 Big (which is what I use)?

I only took a quick look at that ZIP file, but what I meant by “color change” was in-game, by meta-commands. The images above were done with my new meta-commands. The idea is if the default text is, say, yellow and you want to create a white skeleton monster (like above) normally the only way to do that is to have the player manually change the colors, which is quirky. My way the command to print the message itself does that, and due to a peculiar command after the image is done the text automatically returns to yellow- or you can make the color remain with another command.

You can “layer” the colors the way ColecoVision did with certain sprite characters. Thus you could have white stars, clouds, and moon above a green forest, but you cannot draw a horizontal line and hit two colors (excluding background, which can also be changed in this way).

This was inspired by “SanctuaryRPG Black.” I figured since AGT can create similar images the only problem was changing the colors- well, that is no longer a problem.

My next goal is to solve that compile problem. To do this I probably have to increase STACK size, but neither DOSBox nor DOSBox-X allows this, and the compiler itself cannot. Changing the switches in the compile files has no effect.

After that- an attempt to create commands with specific prepositions via something like PrepIs (whatever). Thus PUT KEY ON KUULEST would yield one message but PUT KEY UNDER KUULEST might yield “Your hair stands on end as Kuulest’s corpse sits up, saying ‘you got the loot off me you worthless ghoul now get on with the adventure and leave me to rot in peace!’”

Right now the best I have is a hardwired verb SITUATE. If I want someone to specifically put something ON something he must use SITUATE (Whatever) ON (Whatver).

I was having real trouble with creatures talking (AQUABLUE, HELLO) until I finally guessed all such commands must be at the bottom of the CMD file. After that everything worked fine.

Problem is, while the routines I use for my AGT games are legal they do not work with Gargoyle or AGiliTy. You cannot even leave the first room as you cannot search the cushions.

I really don’t know anything about this, but if you feel that something isn’t working the way it should in Windows AGiliTy, you might want to report it on GitHub. Earlier this year, David Kinder fixed a number of AGiliTy bugs.

For Magx, you should put in the very first line

I should recommend reading the 126Kb readme.magx whose is the manual, not a mere readme (aside that readme files should be always read…)

I think I’ll stick with AGT. I’m too old to change now. Get off my lawn!

If I can figure out that compile problem I’m on my way.

This apparently involves Turbo PASCAL with a “TPE.EXE” file. What should I be looking for? How do you compile with it? Does it work with DOSBox or DOSBox-X? Once over this hurdle I should be on my way.

I haven’t tried it, but maybe Turbo Pascal with DOSBox will do the trick.

Also, FreePascal has a Turbo Pascal mode. Installing Lazarus is probably the easiest way to set it up.

Sadly, the program you linked me to is the one I was using and is unable to do the job. I adapted it to use DOSBox-X as well, but again it fails.

I’ve never heard of Lazarus before- how does it work? The site is a bit vague on that.

Lazarus is an editing environment for the FreePascal compiler, which many people prefer to the standard editor.

Lazarus includes FreePascal, so you don’t need to download or install them separately.

Alternatively, you can download various versions of Turbo Pascal from WinWorld, but they don’t provide any instructions for using them on modern machines.

I finally managed to get the works running, the help from here was valuable. Thanks to all!