This game jam is looking for text + graphic adventures and encourages graphics that target either the ZX Spectrum or ZX Spectrum Next (256 x 80 or 128 x 40).

Games must be developed in Adventuron Classroom. The theme is open, but there are a few little constraints here and there (sneakily injected to reduce scrolling issues).

I realise that the art requirement is pretty off-putting to a lot of people, but I thought I’d test the water this one time and see how it goes (the previous jam was text only).

Full rules past the link.

Many thanks to Ricardo Oyón for the awesome jam art (again), and special thanks to Tim Gilberts, Uto Dev, Andres Samudio & Stefan Vogt for the tools to finally make graphical games able to be exported from Adventuron to 8-bits.

This is the fourth text adventure jam, and there have been some really nice entries in prior competitions.

The Spectrum / Spectrum Next is a wonderful machine to target and the community is very thankful for new adventures, as The Curse of Rabenstein proved. Can’t wait to see the entries!

I entered the first three Adventuron game jams and, I must say, they are a lot of fun.

Adventuron is a full-blown programming language written exclusively for the creation of text adventures. The syntax is a little esoteric, but the editor has code hinting, auto completion, syntax colouring, dynamic error detection and most of the other niceties that you’d expect of a modern IDE. The editor runs in your web browser, so you can edit and run the game in an adjacent panel at the click of a button. The finished game is compiled to a single HTML page that runs in a browser. The reason for the somewhat restrictive graphics size in the game jam is so that it can also run on a mobile phone. Neat.

Adventuron is very easy to learn. I wrote my first full-blown adventure in less than a week (albeit only 7 rooms) with another week for the graphics. You can also have music or sound effects and custom fonts.

@adventuron has done a number of nice Adventuron tutorials to get you up to speed as quickly as possible. A lot of people entering the jams had never even done any programming before.

The games produced for the jams have ranged in quality from mediocre to excellent, but most of them have been very good and, most importantly, fun to play.

The good thing about entering a game jam is that it is a cooperative exercise. There’s a great community and everyone is very helpful and very friendly.

So if you’re thinking of having a go at parser-based interactive fiction or you just want to try something different, give Adventuron a go and enter the game jam. You won’t regret it.

If you want to see a sample of what you can do, feel free to check out my past game entries at itch.io. Just keep in mind that these have a retro feel in accordance with the spirit of the game jam rules. That doesn’t make them any less fun to play.

The Next Adventure Jam has entered the (public) judging phase.

There are 7 games submitted, so if you have time, please do check them out and rate them.

Charlie The Chimp by Garry Francis

Charlie The Chimp has been mistakenly locked in the Gorilla enclosure by a careless zookeeper and must find his way home before the Gorilla wakes up and sits on him. 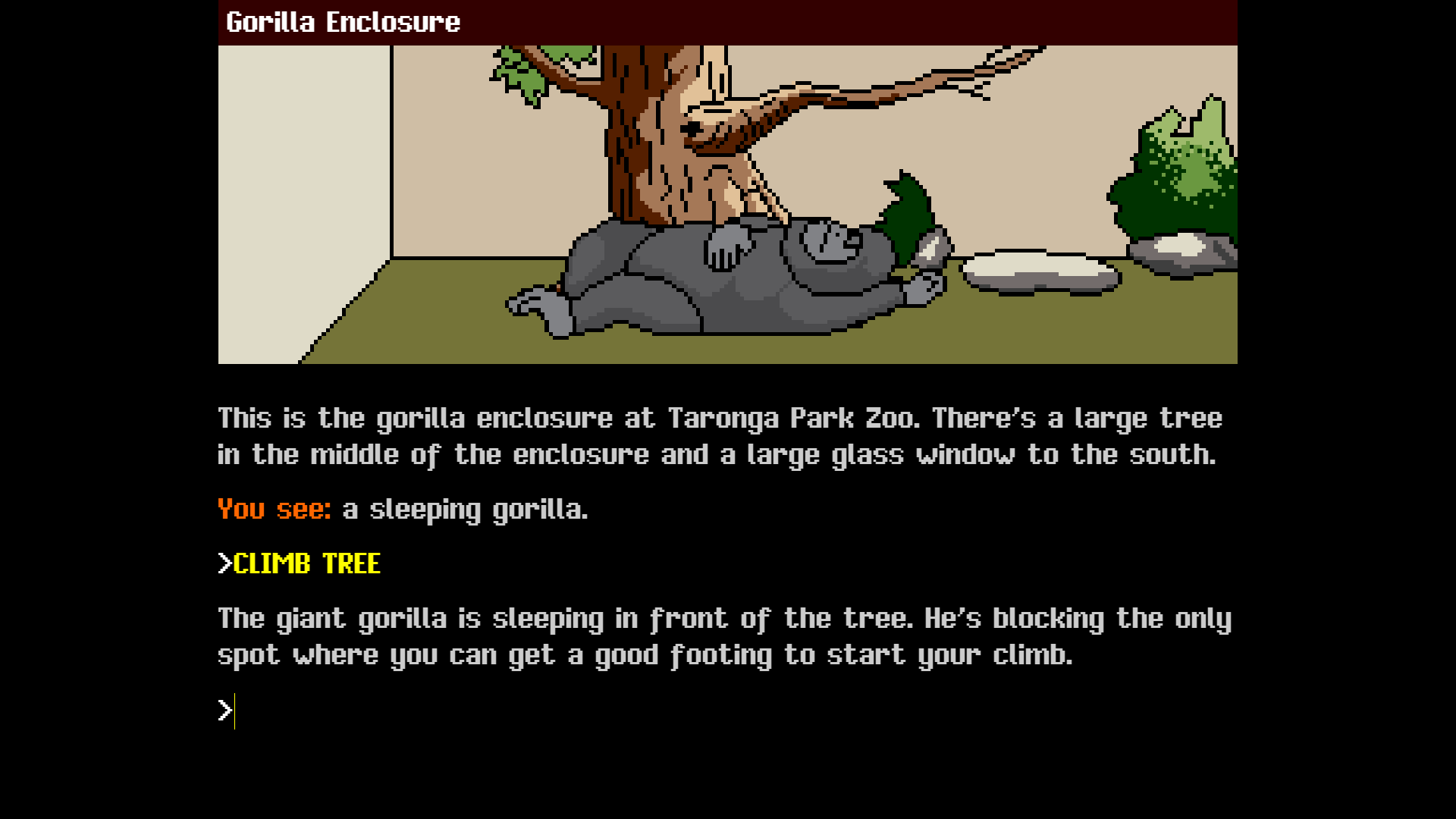 Dawn of the Soviet Ladybirds by Christopher Merriner

‘Ladybirds. What a summer for them! They were simply everywhere. Dorothy was ordinarily happy to see them in her garden, but this year there was such an abundance of them that it really was rather alarming…’

Something is amiss in the peaceful surroundings of the English countryside. Ladybirds are everywhere and Dorothy Clutterbuck is quite sure that they have sinister intent. But who will believe the delusions of a middle-aged spinster locked up in the secret prison known only as The Institute? Will anyone listen before it is too late to turn back the red tide? With the help of one or two friends along the way, it might just be possible to overcome the dangers and the disbelief, but the way is fraught with peril. Can Dorothy triumph? There is only one way to find out! 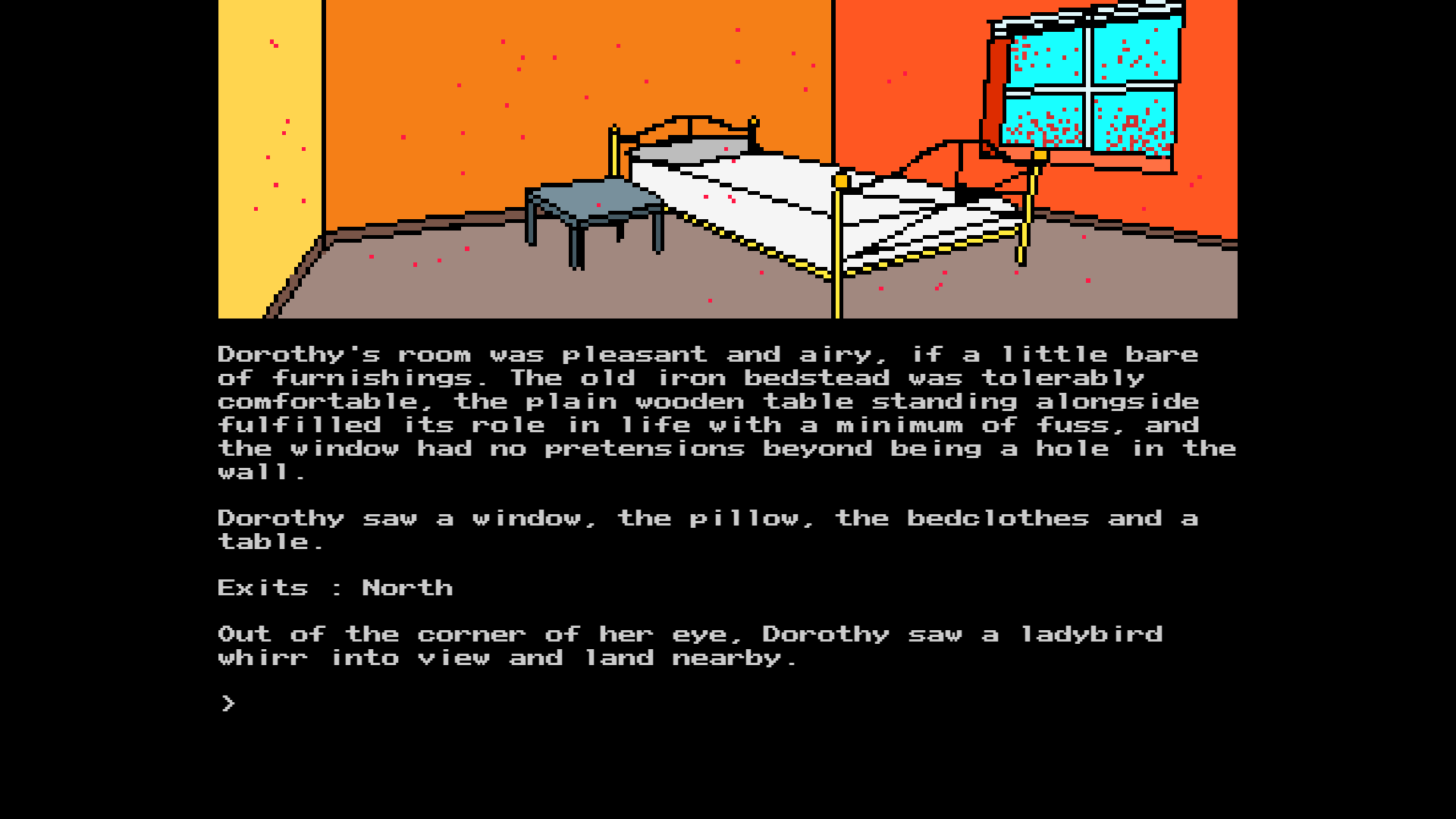 Last Night at the Office by Tim Jacobs

"You are a little-respected IT manager at the Ven-Tec Corporate Offices. You have known for some time about the embezzling, fraud, and multitude of other illegal activities your company has engaged in. You have to find the evidence to incriminate the organization and bring them down.

Last Night in the Office is an Adventuron game designed for the ZX Spectrum +3, for the Next Adventure Jam. Work your way through the office of the Ven-Tec Corporation in stunning 16 color graphics and two word text parser!" 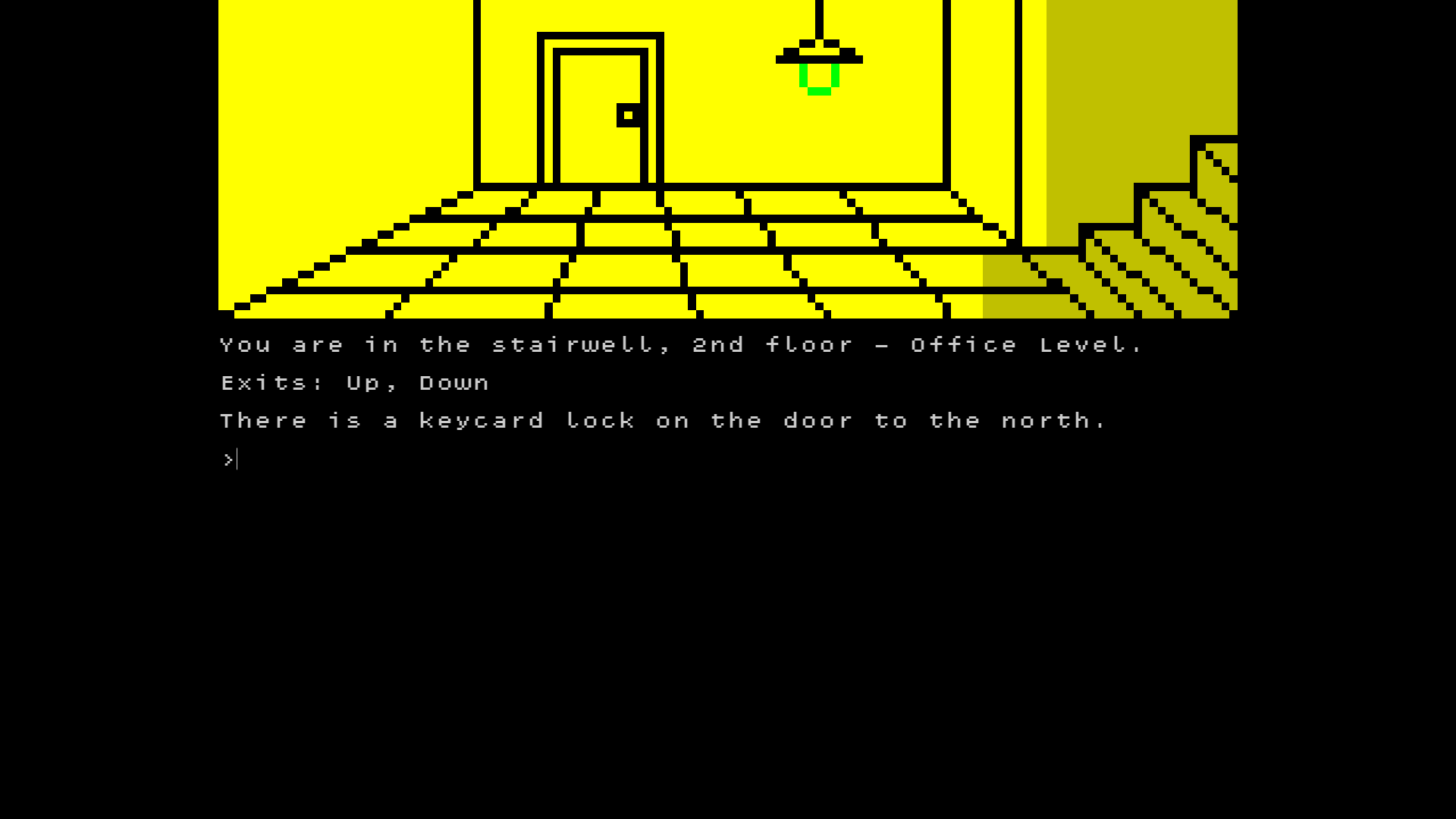 You have taken shelter in an abandoned hotel during a fierce storm. 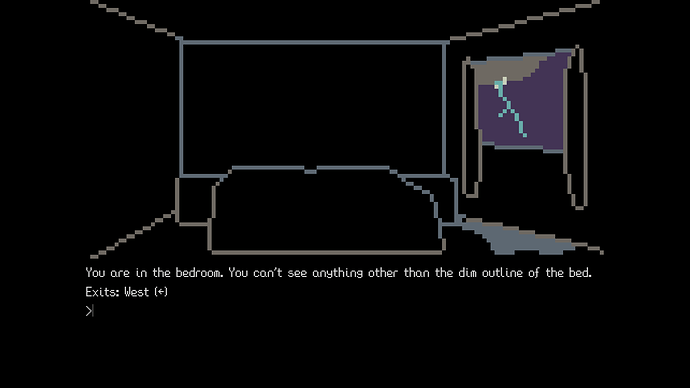 One Last Thing by Dee Cooke

"You thought your mission for the Company was over. But you were wrong.

Now, where has that keycard for the garage door gone? 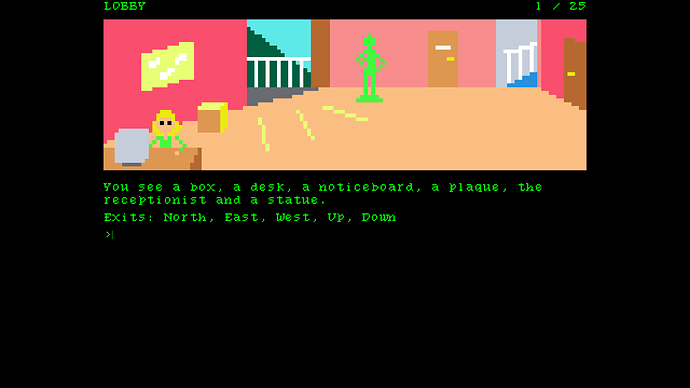 “Help the ghosts escape from here, before the yellow bulldozer destroys everything in its path. To replant and restore a primary rainforest instead. Is this world serious?” 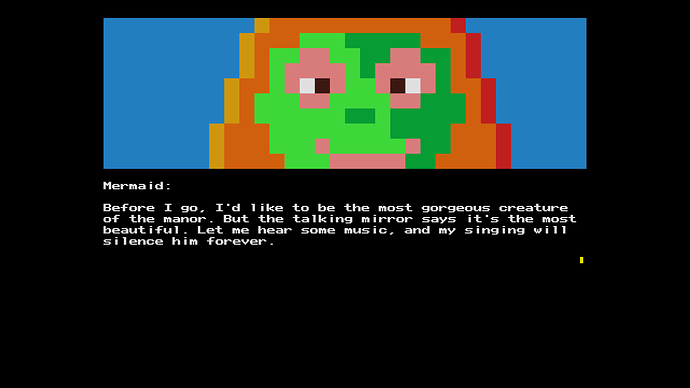 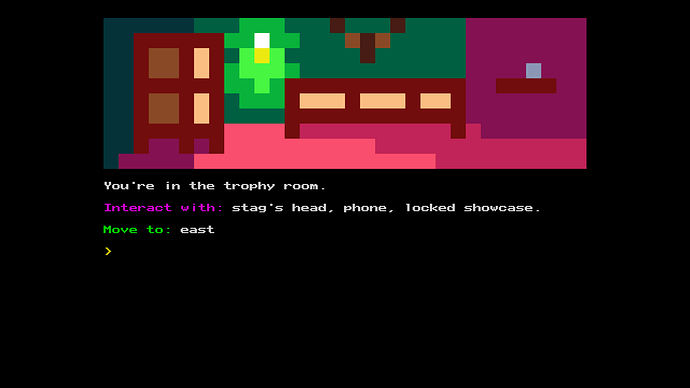 Rite of the Druid by Sunteam

“You are part of a small tribe, preparing to take part in a ritual that will allow you to become a full druid. You are transported to a strange land where you must find the rune of power and return to complete the rite.” 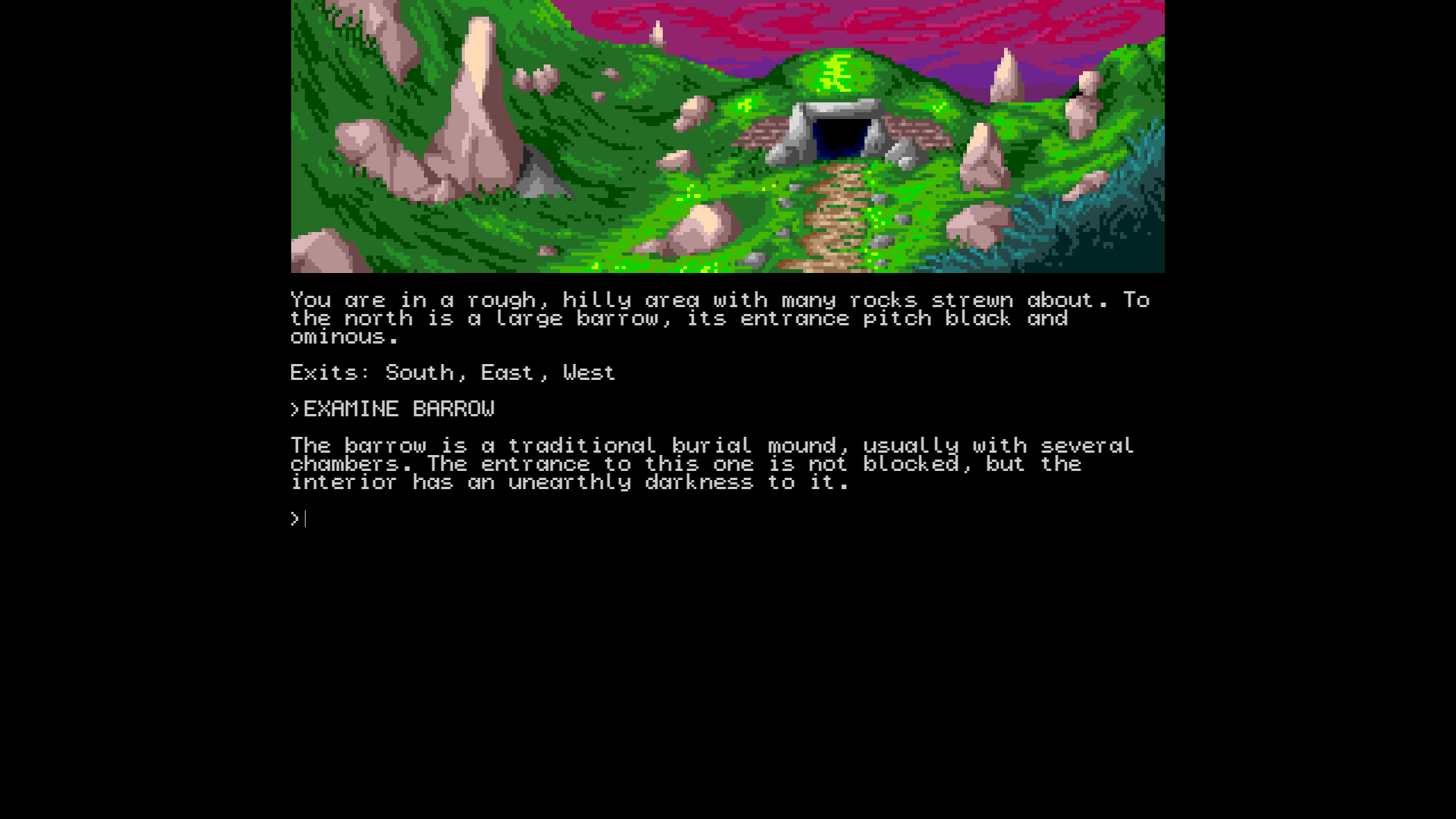 Amazing, can’t wait to give these games a go

Wow. These games look great. They have a real retro vibe.

After all the discussions over the last month, I’m really looking forward to playing these games. I hope that everyone else on intfiction.org will also give them a go and vote during the judging phase. Think of it as a practice run for IFComp later in the year.