Hi! Does anybody know or have ancient versions of Inform? Just asking for historical purposes… I have found some 5 series releases, but nothing before them… specially the original release.

ifarchive.org/indexes/if-archive … form5.html is all that I know about. If anyone has anything earlier, please upload 'em.

Definitely no slight intended here but given how people often lament how much of Infocom’s stuff, like ZILCH, is apparently lost to history, never to be fully recovered, it would be somewhat ironic if those who followed in its stead fell prey to the exact same situation.

For many years nobody thought about it, and the IF Archive only tried to keep the latest version of any game or tool.

You can see that in 2006, there was an active effort to locate old versions of Inform (compiler and libraries) and upload them.

I put together what I could find of inform5 into something easily installable for Unix systems at gitlab.com/DavidGriffith/inform5unix

I have some indication that certain Archimedes magazine CD image stored on Archive.org has an Archimedes archive whose timestamps predates Inform 5.0 release (that is, perhaps the surviving source/archimedes binary of inform 4…) but I never managed to proper unarchive this locked treasure chest, lacking an Linux/unix tool for decompressing & converting said archive, and without the patience needed for bringing up a working archimedes emulator.

if of real interest, I can point to those .iso ; really hope to see someday an ifarchive/compilers/inform/old/inform4

brief history of the former research:

Version 1.00 (approx 19/7/96) - using out-of-date compiler & library from a
1994 Acorn User disk. The first properly working version, and one of two
versions submitted for the AU interactive fiction competition. Everything
works okay on !Zip, but !Zip2000 crashes if you try to speak to anyone,
which makes it rather tricky to complete the game.

whose indeed contain this file:

from the timestamp, if isn’t Inform 4, is an early Inform 5, surely predating all those in the IF-Archive, save MPW_Inform5.4.sit.bin

the file is in that archimedes ZIP compression format… good luck !

The archive doesn’t look to be compressed, as plenty of plain text is visible in it. From looking at the plain text, it’s Inform 5.2 release 1259, which we already have (http://ifarchive.org/indexes/if-archive/infocom/compilers/inform5/source/old/). No source code obviously in the archive. Ah well, keep searching!

According to what I see here: acornuser.com/acornuser/index/ind4.html, the April 1995 issue of “Acorn User” was the first to have a CD included.

what file(1) reports is:

and I don’t figure how to unpack/unbundle/whatever…

EDIT: on the other point, that the 1995/04 AU CD being the first the lead came from history.txt in the sources of wedding by James Neil, whose, as quoted above, points to a 1994 CD, and specifically says also:

Version 1.10 (approximately 20/7/96) - using a more up-to-date compiling
package from a 1995 AU disk. Also, quotes and a title page added. New
problems arise - !Zip2000 crashed if the player attempted to use my own
home-grown LOOK UP command so I had to disable it, and because PRESS TWO (or
any number in word form) ON CONTROLLER crashed both interpreters, I had to
catch this with a ‘multi’ keyword in the grammar section, which tells the
player to use number form for buttons, but it looks rather strange.

Version 1.20 (31/7/96) - using compiler and library from AU’s CD ROM 1996.
Works with !Zip and !Zip2000, Deborah’s movement code improved, all look up
commands work, ‘press two on controller’ works, when books are removed from
library they can’t be collected again, … and the large help menu from the
previous two versions has been ‘suspended’ because of an error somewhere in
the compiler which gives an obscure error message if the game text exceeds a
little over 70,000 bytes.

However, dunno if there’s something useful in the AU '96 release of Inform 5

EDIT 2: there’s a most important thing:

now I have treated this file with strings(1) and there’s a perhaps interesting thing:

that is, AFAICT, the fifth and final edition of the pre-DM1 manual, (and indeed, an eyeball scan reveals differences with DM1), so at least something is recovered, perhaps ?

What we find is an Inform executable, not source code. Oops! And executables for Zip, and z-code files of Advent and Curses. (“Release 12 for Acorn User / Serial number 940604”)

There’s the Inform manual – that’s the header you see in the previous comment. Also a set of library files (Grammar, Parser, VerbLib) dated 3/7/94. We may have those already; I’ll check.

This library is not quite the same as ifarchive.org/if-archive/infocom … 940612.zip , but the differences are small. It’s missing some comments and a few small (one-line) bug fixes.

so, in the end, we have recovered only the release 5 of the pre-DM Inform manual ? better than nothing, I think

Hope you upload it in the Inform5/manuals/

Tnx for the link to the arcFS unpacker; perhaps deserve to be placed in if-archive/tools

According to what I see here: acornuser.com/acornuser/index/ind4.html, the April 1995 issue of “Acorn User” was the first to have a CD included.

The August, September, and October 1994 issues of the magazine came with cover disks (3.5-inch floppies), which also contained some early Inform software, though nothing that hasn’t already been mentioned or linked to in this thread, I don’t think.

The disk-images have been found, and I’ve extracted the Inform software and attached it here, just for completeness: 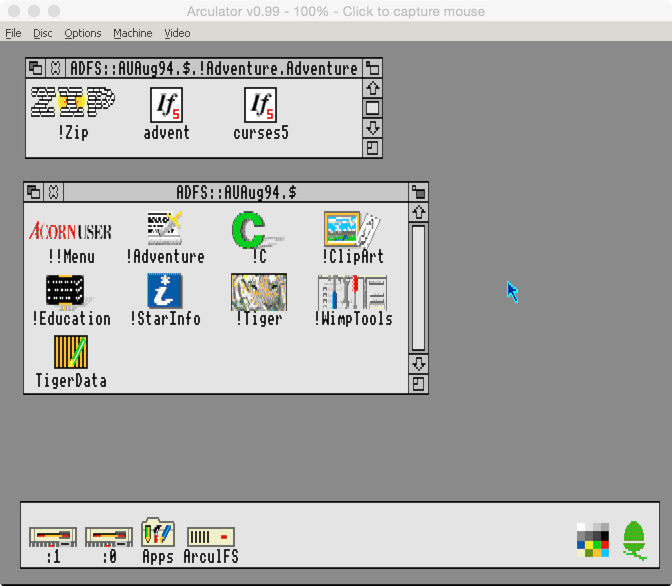 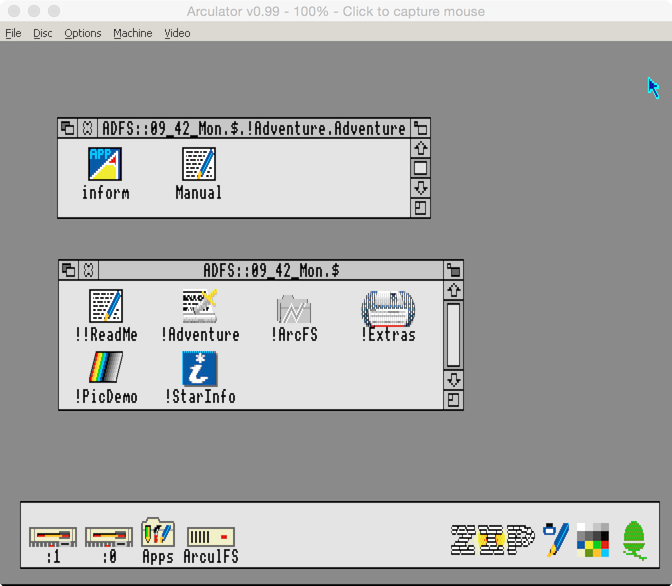 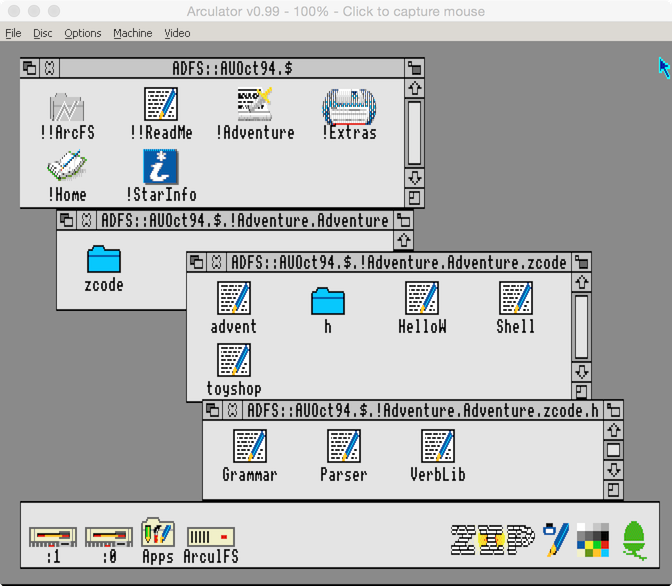 It’s sad to think that some or all of this may have been lost forever… Things move so fast that sometimes we forgot to preserve things.

What do you suppose “Inform v1258” is supposed to represent?

Inform 1258 is a version of Inform 5.2, I think. For comparison, see http://ifarchive.org/indexes/if-archiveXinfocomXcompilersXinform5XsourceXold.html

Since the first release, much improvement has been made in memory
management which is now quite efficient: it allocates between 50 and 75K of
memory, as opposed to 800K in the first edition. The code is in ANSI C, is
contained in a single file (without needing non-standard headers) and some
effort has been made to improve its portability. Hopefully it doesn’t
assume an ASCII character set, or 32-bit integers, or any particular
byte-orientation within integers. PC versions now ought to be feasible.

The code has been annotated to some extent, and contains notes which
should be useful to anyone trying to port the code to a new machine.

This documentation has changed only within the above introduction, in the
new “objectloop” construction, and in Appendix C (sample output for the
given programs). The language which Inform compiles has not changed (except
that two defunct features, which had not in any case been documented, have
been withdrawn). Details of changes to the ANSI source code of Inform may
be found in detailed comments at its head.

The author’s email address may be found at the bottom of this file.
Comments and bug reports (by email) are welcomed with whatever degree of
enthusiasm he can muster.

The interesting things are in the z directory:

Core is what later became the Inform Library;
Dejavu is the no more lost source of dejavu.z3

Later I’ll rename the archive in a more proper manner (what should be the extension of an Archimedes archive ??) and I’ll duly upload in its proper archive (that is, the IF Archive)