An essay on indie and freelance writing communities

As part of my continuing series of gamedev posts for my upcoming Spring Thing game Sherlock Indomitable, I wanted to talk about writing communities.

As of now, I’ve written some content for a variety of communities, enough to see how the process work. These communities include Wikipedia, the IFComp community, SCP-Wiki, Reddit, Wesnoth, and for commercial games. It’s interesting to see how they all deal with similar issues in different ways.

My experience in these communities is varied. In some, such as SCP and Reddit, I’ve only had a small number of posts that passed the ‘acceptable’ bar. In others, such as Wikipedia and IFComp, I’ve spent years working with the community.

The first two things I want to talk about is how different communities treat writing along the axes of canonicity/originality and self-awareness/earnestness. I’ve attached a chart to this post. 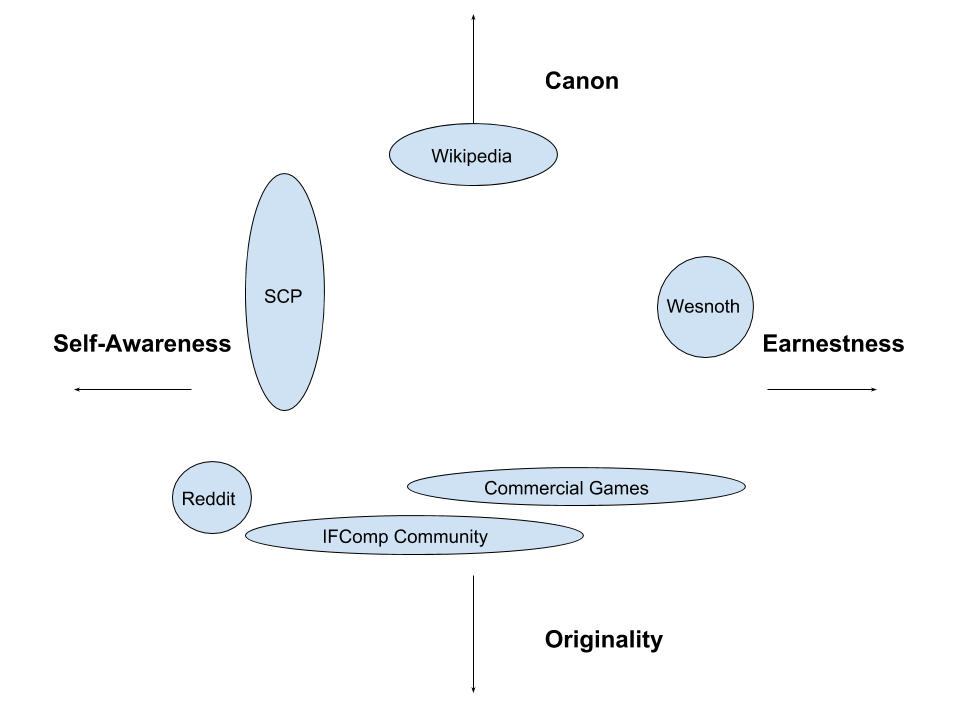 Every community establishes safeguards about what sort of content is acceptable.

Some communities, such as Wikipedia and SCP-Wiki, establish a rigid order that prevents subpar content from being added. A new Wikipedia author has to pass through a maze of bots, editors used to overturning vandalism and well-intentioned bungling, and page hoarders who refuse to allow others to edit their favorite topics. Similarly, SCP-Wiki has a cohort of tough mods who spend much of their time deleting pages and images.

On the other hand, communities like IFComp/IFDB and especially Reddit are more of a wild west. Nearly anything is acceptable that isn’t illegal (such as the infamous IFComp game that was nothing but the code to jailbreak a DVR). It’s a swim-or-sink scenario; due to the lack of barriers, the only way to get attention is by being high-quality and getting attention.

Others are somewhere in the middle. Battle for Wesnoth campaigns allow great freedoms for their authors, but there is a general expectation that a campaign will usually fit in with pre-established background material.

Commercial games vary, but the bulk of IF writing is not licensed material, and so canon is not as important. This may change, though, given the rise of free to play IF games.

One of the most striking things about the various communities is what is considered ‘good’ writing. Self-awareness is a major element here.

One of the clearest contrasts here is the treatment of classic RPG tropes in Battle for Wesnoth vs. IFComp. Are you considering writing a game about forest-dwelling, long lived elves combating orcs in a battle of honor? In Wesnoth, this can be some of the most popular content. In IFComp, a significant segment of the community will villify it.

It’s not ubiquitous; the game Heroes in 2001 placed in the top 3, but one reviewer said of it, "If you don’t like fantasy games, this is not going to appeal to you. This is not to say that it’s not a good game, but it calls itself a most traditional CRPG experience and this is in fact what it is. There’s more to it than just the CRPG aspect, but mostly it’s “You chose to be a thief, so you can pick locks and climb walls. You must steal the jewel!”

Reddit and SCP-Wiki both expect authors to be subverting something at all times. A story with no twists is a story not worth telling. On the other hand, most commercial writing that I’ve done is comfortable with following classic story outlines and allowing surprises to come from other sources than genre subversion.

With that, I’d like to segue to a different topic:

The vast majority of these communities rely heavily on editors and beta testers. I’ve come to realize that these people are the most scarce and valuable resources of these communites. I’ve attached a chart: 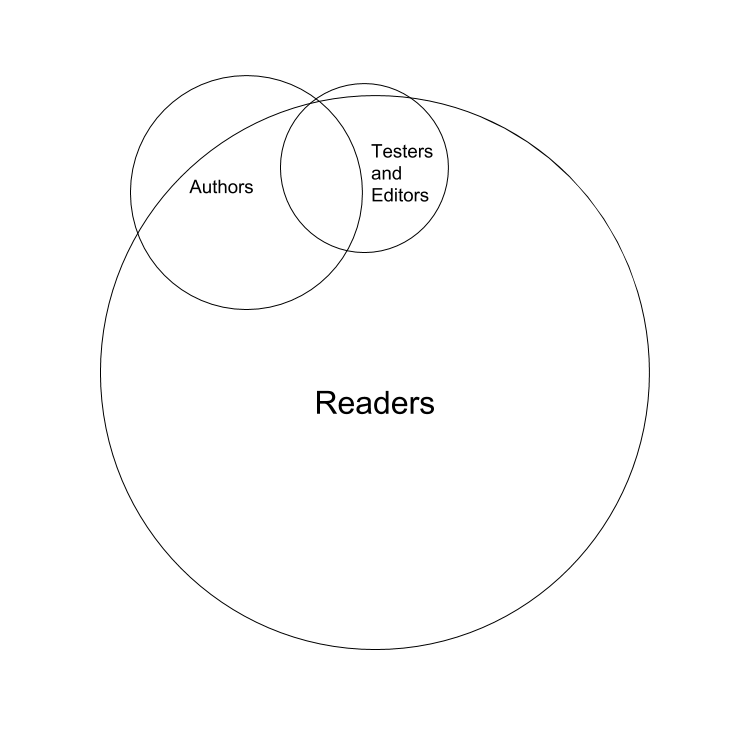 The number of testers and editors is smaller than the number of authors or the number of readers, but all good content needs to go through them. There are frequently a few heavy-hitting people who take the brunt of the work, some intermingling of authors helping others, and few fringe testers/editors who help when available.

In the IFComp community, there are some people who test just about everything, like Andrew Schultz, Hanon Ondricek, and many more (those were just the first that came to my mind; there are others who are extremely helpful). In Wikipedia, there are mega-editors who look over every single new page in a given project. And in commercial games, there are dedicated editors who will supervise up to a dozen games or more.

The approach these editor/testers take varies from community to community.

At one extreme, we have reddit. The ‘tester’ role in reddit writing is essentially heckling. Horrible writing gets mocked to scorn in an effort to drive away new authors. Mediocre writing is criticized by way of mansplaining. Content is published first, criticized second, and feedback is incorporated into future products.

On the other extreme, we have commercial games. Professional editors are committed to a product through a commercial contract, and often through professionalism. Nothing gets published without multiple rounds of revision.

Like all of my gamedev posts, I want to finish by talking about my upcoming Spring Thing game Sherlock Indomitable.

This games origin was completely planned around community involvement.

It involves:
1)The textadventures.co.uk community, which is the largest organized parser playing community. It subsists almost entirely in the ‘reader’ group. They played my game Color the Truth and one of them mentioned that they’d like a sequel. Simultaneously, the most highly upvoted games on the site are Sherlock Holmes game. I decided to make a Holmes game with the same system as Color the Truth. This group is high on the earnestness scale and in the middle of the canonicity scale.
2)The XYZZY community, which is high on originality and self-awareness. Like many parser authors, I’ve wanted to write at an XYZZY-winning level. In general, I’ve been unsuccessful, but I have received one nomination. I decided to make Sherlock a longer game to give it a better shot at winning a nomination (as long, polished games do better at most things).

To maximize awareness of my game for the XYZZY’s, I decided to enter it into the two most important IF competition for long works,
3)Introcomp (where unfinished openings to big games are submitted), and
4)Spring Thing (which was founded to give a venue to long parser games),
both of which are fairly neutral on my axes (they’ve seen several sequels and a variety of content types).

My beta testers have been absolutely invaluable. The Introcomp voters (which function similar to beta testers, in that feedback is encouraged) were very supportive, one even writing an entire essay that he uploaded to google docs. Many of them supported the idea of the completed game.

In the intermediate run, when players first tried my completed game, they provided useful critical feedback. The game was a mess at that point, and beta tests were mostly full of bug reports and issues with tone, playstyle criticisms, etc. This was useful, and simultaneously extremely disheartening. While I got the most done at this point, I was also convinced that the game was a hot mess that was going to tank.

Finally, as the game has gotten closer to publication and the comments from the intermediate testers, the final testers have provided much-needed support. They’ve been able to say what about the game they liked, as the glaring errors and problems from earlier versions have disappeared.

Given the small size of the parser community, the feedback from beta testers may be the majority of all feedback you ever get. I can’t say enough how much my testers, from the early introcomp testers and voters to the load-bearing bug finders to the polishers and finishers, mean to my game.

In conclusion, every writing community varies in how it approaches canonicity and genre conventions, but they all rely heavily on a small few to serve as mentors and gatekeepers. Nobody is more essential to a community than this group.

And, if anyone needs a tester, just let me know.

(For reference, here is a link to some of my work in these different communities:)

SCP-Wiki: http://www.scp-wiki.net/scp-3762
Wikipedia (link may not work on mobile): https://en.wikipedia.org/w/index.php?limit=500&title=Special%3AContributions&contribs=user&target=Brirush&namespace=0&tagfilter=&hideMinor=1&start=&end=
A very squicky NoSleep post on Reddit: https://www.reddit.com/r/nosleep/comments/2hqt67/i_discovered_another_orifice_on_my_body/
My Wesnoth Campaigns: Sand in the Wind and A Fiery Birth
My IF profile: http://ifdb.tads.org/showuser?id=nufzrftl37o9rw5t

Your essays are always a delight. Are they organized together somewhere? Cross post to a blog or something?

Thanks for the feedback! I’m currently using intfiction as a blogging platform because I think it has a better chance of being archived and findable in the future than a personal blog.

I’m also very slowly compiling them into a big free ebook for the same reasons.

Edit: I also realized that the canon/originality axis is just lawful/chaotic. If you make self-awareness evil, this makes reddit Chaotic Evil and Wikipedia Lawful Neutral, which I feel is very appropriate.

I guess usenet is so far off the radar these days that it doesn’t get a mention.

I’ve never posted on usenet, so I didn’t mention it. I’ve read tons of archive posts, though. When I refer to the IFComp/IFDB community, I think of the community born in r*if.

I check it every week or so, but I haven’t seen anything on there recently.