If you’re gonna go to hell, you want your best friend to have your back, and that’s exactly the premise of Afterparty by Night School Studios.

http://nightschoolstudio.com/afterparty/
Lola and Milo are best buds, ready to escape the study-party lifestyle and all the tools that populate it at their requisite graduation bash, torn whether they pound back drinks and give it one last hurrah, or sail above it all and be the adults they plan to be. Before sufficient time to get so much as a buzz on though, they find themselves inexplicably in Hell.

Their after-hours party skills (or lack thereof) come into play when the shift-whistle blows during their judgment. Closing time is closing time, and it’s now happy hour. The denizens of Hell take their leisure time very seriously, Milo and Lola are encouraged to spend the night enjoying the city until the daily grind resumes, “…don’t worry. You’ll be having maggots forced up your nose soon enough.”

Thus begins Afterparty by Night School Studios. Like the fascinating Oxenfree, the main gameplay consists of conversation choices which are frequently offered while conversations are playing out. Not saying anything is just as legitimate as knowing when to jump in and contribute or interrupt. Usually, it will just stem the steady flow of hilarious patter by a well-chosen voice cast (I would listen to Ashly Burch read the phone book if she recorded it) but the timing of the interjection might alter the flow of events as well. 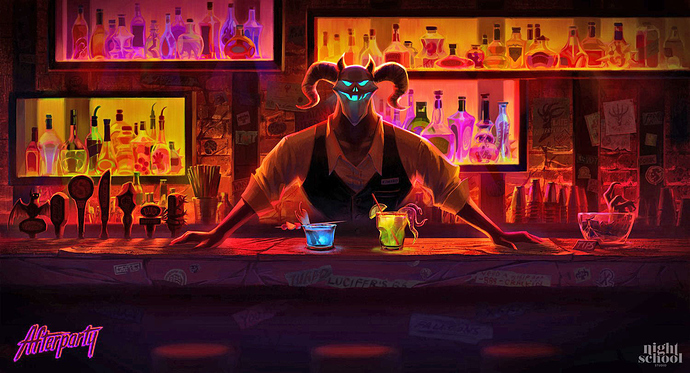 dims1500×811 266 KB
The other gameplay mechanic is drinking. Getting liquored up offers you a third dialogue choice from your usual two, and the type of cocktail, as well as how much and how fast you drink will also affect the content and tone of the choice. There are some hardcore cocktails in the Underworld: drinking “The Great Emathian” is liquid courage. A “Bloody Stool” sounds hideous but buffs the flirtatious nature of your speech.

11928×444 258 KB
The dialogue is appropriately filthy and mature, but hilariously so - “Marcy, your tits will be consumed by snapping turtles, only for them to re-grow larger every day…” "But we only robbed Jewish liquor stores!" - the visuals rival some of the best of Lucasarts design and lighting aesthetic; bars are dim and hazy, Hell is purplish-red gothic fantasy rockscapes and nightspots which are convincingly designed, and cartoonish demons glow from within while trash-talking your beer pong skills.

I’m having a blast, and it’s awesome to see IF-style choice-based conversation be used so prominently in such a unique way. 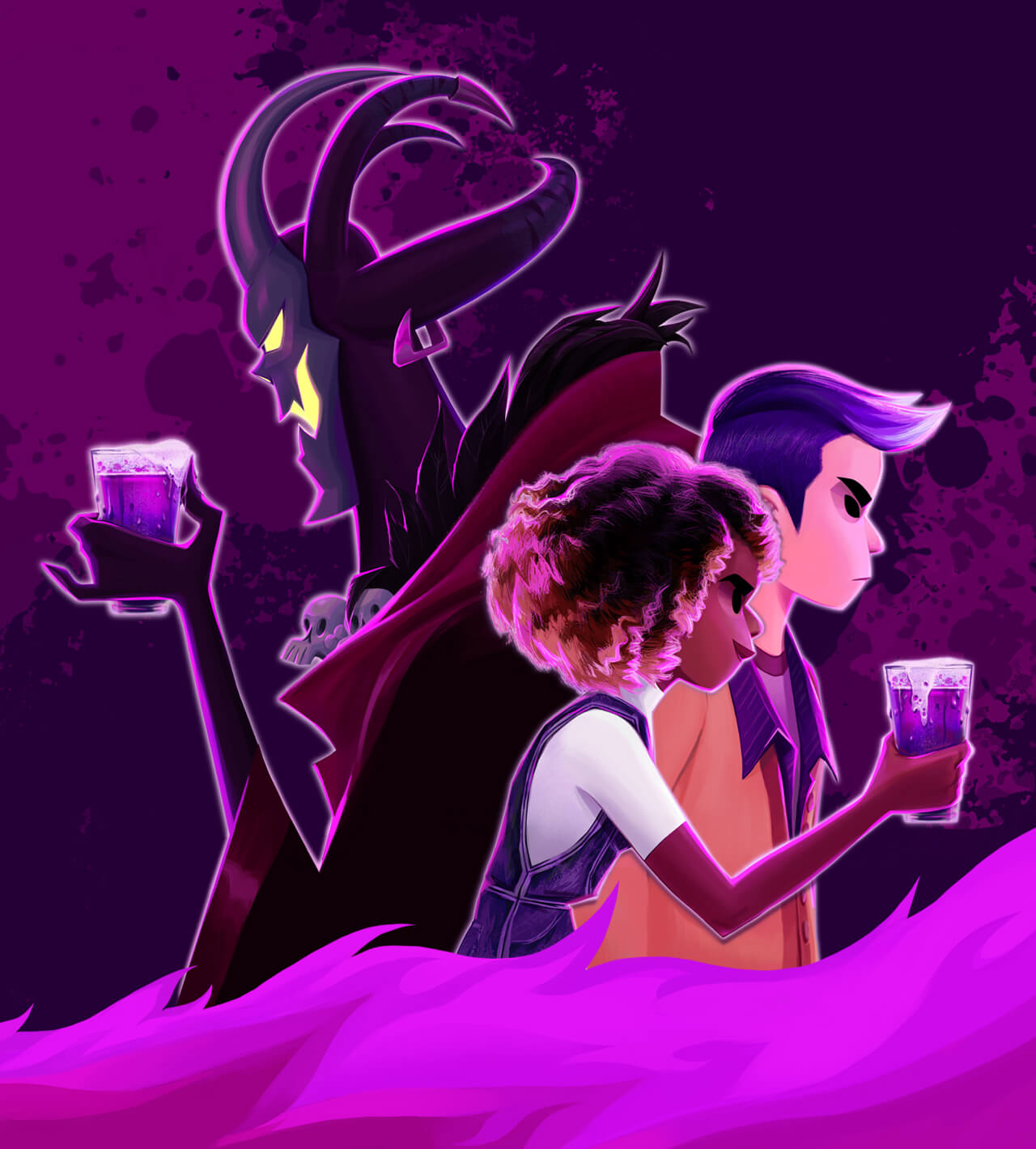 I finished Afterparty a couple days ago!

Okay game, didn’t like it nearly as much as Oxenfree, but that was a pretty high bar for me.

Far as dialogue goes, Night School’s games are interesting b/c it’s a lot of walk and talk as you go between places. Real-time, with a sort of interesting thing where you want to wait until the other character’s finished a thought before saying something, but before too much time’s passed and the options fade away and some one else says something. In Oxenfree you could just cut people off, which some players didn’t like. Afterparty seems to wait until a thought’s finished before you say your choice (Also there’s an in-game meta-comment on those complaints). Active movement really does add something to the convos! Also Hanon’s right, the dialogue definitely pops.

One other thing with Night School’s game design: you don’t actually spend that much time focused on the actual game premise Thing you’re supposed to be doing. You do a lot of walking there, you talk about it, and you talk even more each other, but actual time doing the ostensible objective of the night? Not that much! It’s more there to put the characters on edge, frays some nerves, and force them to work with each other (more or less). The stuff that matters happens in between.