Advice needed for IF beginner!

Hi
After several months of saying I would, I have now attempted my first IF game. I am currently on my third day working my way through the original ‘Adventure’. I drew a map initially but I got into such a muddle that I resorting to referring to a pre drawn one instead.
I want to get into IF in a big way and wondered if anyone could give advice on other stories that would be good to begin with or any map drawing advice?
I was considering playing ‘Zork’ next but wondered if that was a little ambitious at this stage.
Thank you for your help!

The answer to this question really depends on what you’re looking for out of IF.

As the first interactive fiction game, Adventure is obviously very old-school; most IF being written these days is fairly different. In particular, the overwhelming majority of modern games are smaller, faster-moving and less difficult, and so might be an easier introduction to IF. But if what you really want out of IF is tricky puzzles and big maps to explore, Zork might be more to your taste.

You might find this list helpful. You can click on any of the games to get a page with reviews that will allow you to get a sense of what that game is like.

As for map drawing I canhighly recomment trizbort.com trizbort.genstein.net/index.php#overview
I use it initially when I plan my games.

Thank you all for your help! I feel I now have a direction in which to move with this. Cheers.

Despite generally being a fan of “old school” IF, I readily admit that map-intensive games (as old-school IF tends to be) can be something of a pain in the ass. Adventure is particularly annoying, since my recollection is that it has a lot more assymetrical connections than most games (i.e., connections where you go east from room A to get to room B, but going west from room B does not take you back to room A). When I originally played it, I didn’t even try to “map” graphically, but just kept text notes as to where each exit from each room led. The result was a huge pile of paper full of scribbled notes; as the wee hours of the night wore on, my scribbles became less and less legible, which caused a bit of a problem when I had to follow them the next night (all the more annoying because there was no way to save a game in progress!).

With the next generation (e.g., Infocom’s products), assymetrical connections were less prevalent, so I turned to scribbling pictures instead of text. I never could figure out why it was that, no matter where on the page I put the box representing the first room, and no matter which direction I started out, I very quickly ran into the edge of the paper (while the direction in which there was plenty of room on the page was always the end of the game world).

One idea is to play with a friend (which I think is a great idea anyway in that it brings two different perspectives to solving puzzles). The idea is that you “drive” (i.e., type the commands at the keyboard) while your buddy does the mapping. Having usually been the one who got stuck with the mapping chore, I can attest that this makes the game much more enjoyable – for the driver!

I am glad someone got into exactly the same difficulties with Adventure that I am having!

I have attached a photo of my map to show the web of unreadable madness I created. 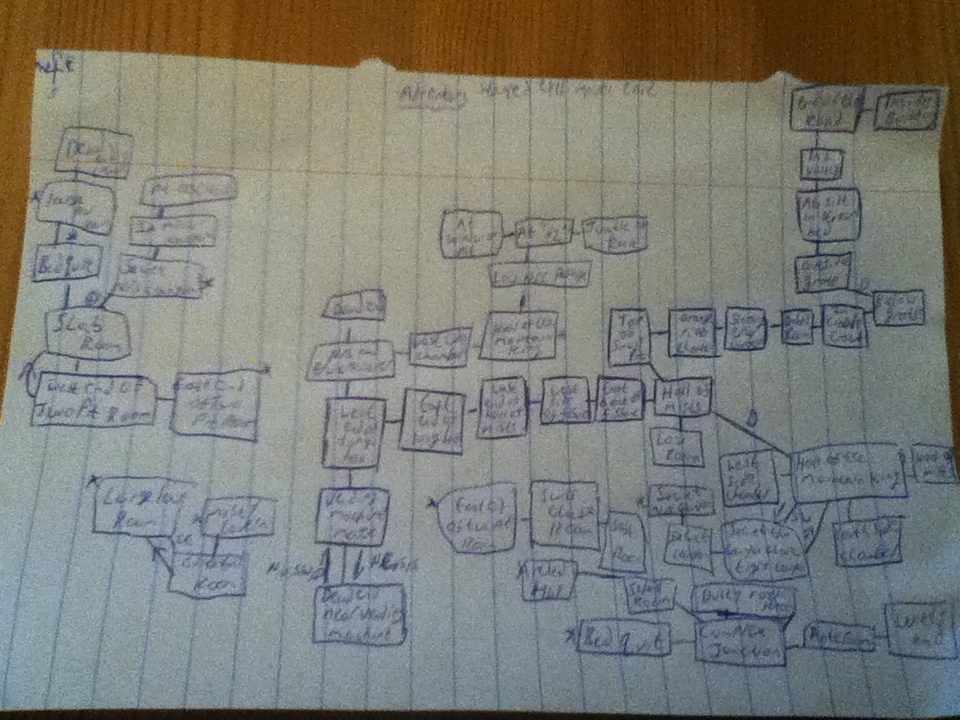 Octofuzz, your map is far neater and easier to follow than mine typically were!

Despite the mapping nuisance, I would urge you to stick with it. To me, the fascination of exploring a truly interesting world and the sense of satisfaction you get when you successfully solve a puzzle, make it worthwhile.

I do want to stick with it, I saw the documentary ‘Get Lamp’ and feel that map drawing is a part of the overall experience.

I am really looking forward to digging into IF, who knows, I may even write one at some point if I feel I can make one worth playing!

Its wonderful to see that there is such a vibrant and active community for this.

Just remember that not all games are map games! Enjoy what you like, but sometime peek around and see the other stuff that’s available!

Seconding Flourish. If you ever totally burn out on the very idea of mapping, or even playing games with multiple locations, there are a lot of very good games with only one location. I particularly love Suveh Nux.

I will definitely check out some non map games as well. Variety is the spice of life and guess you have to try lots of types of IF before you finally work out which is “your thing”. I have got lots of very good an encouraging advice here so far!

As for map drawing I canhighly recomment trizbort.com trizbort.genstein.net/index.php#overview
I use it initially when I plan my games.

That’s pretty nifty, though the quirks take some getting used to. For fun, here’s my map of Crowther’s version of Advent:

It looks nice and clean!

This morning I have been bashing my way through ‘Dreamhold’ with the mapping software to see how it goes. It is working pretty well but the “Is this a different room?” function takes some getting used to if you are new to IF.

Until I get better at physical map drawing I might use the Trizbort route to make sense of where I am going.

It is a shame there isn’t any mapping software that works for IOS, I use have Frotz for IOS but it would give me the full package if there was a way to automap on there as well.