I’ve been dealing with this issue for a couple of days now and was wondering if anyone else has ever run into this. (So sorry if there’s already a thread about this.)

The game I’m working on has eighteen inventory objects to pick up and use for different puzzles. Creating and using the first fifteen objects works perfectly. However, my program refuses to create the last three.

Part of this could be because I’m a non-coder who relies on duct tape and bubblegum, but the thing that’s odd is that I have a create/target inventory command (that occurs in the same room as the last three items) right above the broken code that works perfectly fine.

I don’t remember there being an object limit in the user guide or the cookbook, but if anyone has faced a similar problem with creating objects or has any ideas on why that might be the case, I’d love to hear about it. Thanks~

If you have the relevant code, you could post it here (using the ‘code’ option at the top of the message box on the same row as the bold and italics buttons).

You can also get live help at the Adventuron discord (I think this is the link: Discord)

And you’re right, it shouldn’t be a built in thing; there are adventuron games with way more than 18 objects, so something’s not right!

Thanks Brian for letting me know how to post code

Again, I’m a non-coder so it’s real messy and long, but I’m working on a list to hopefully consolidate things.

Replace the final else_if and replace with

Join the Adventuron Discord to get really fast replies to questions like this! Adventuron (link expires in 7 days)

Sorry idk how to get the line breaks, I’m on my phone lol

Hey Tristin! Thanks so much for the reply! (And don’t worry about the line breaks

I tried it out and tested it but unfortunately

it still doesn’t register the create command, so it looks like it’s stuck in a loop

I probably should bring it to the discord tbh, but for some reason it intimidates me haha. But maybe I’ll just suck it up and ask

Sorry idk how to get the line breaks,

It’s three backticks instead of one, or you can press the </> button in the editor toolbar.

Yes do! I can help out better / come up with a new strategy when I get home and get on my computer

We are so nice in the Discord. Promise

For the inventory limit, make sure you have BOTH of these things in your code:

I recommend including this in vocabulary:

For the inventory limit, make sure you have BOTH of these things in your code:

Got this! Thanks for checking~

I recommend including this in vocabulary:

This is such a good idea! Thanks so much for suggesting it! I’ll be sure to use it in my next game since this one’s pretty much done haha

Here’s the error I get when I put it in

Thanks so much for trying all these out, though! I’ll put this out in the discord and see if we can all figure it out 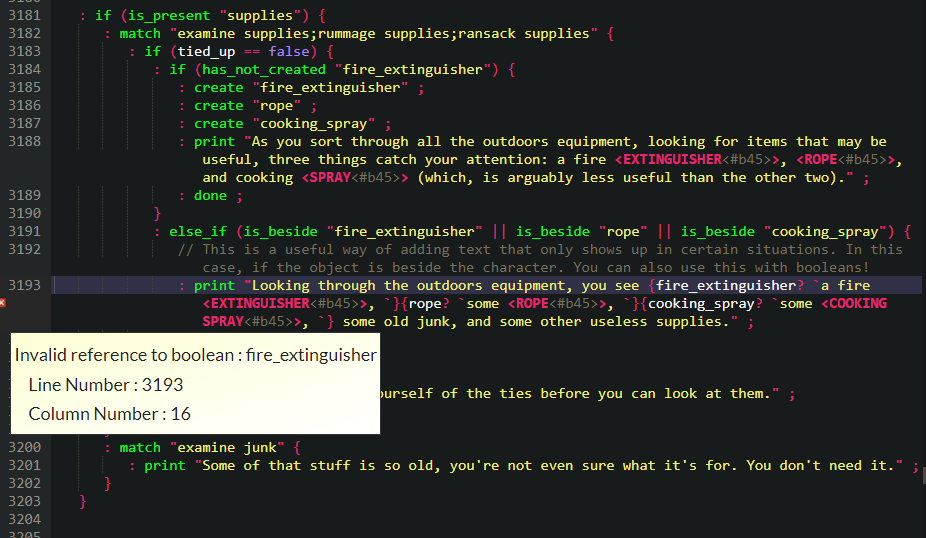 Oh darn it… I guess the {fire_extinguisher ?} thing only works in the beta version. I think the regular version does allow you to do that with booleans though.

Anyway, I see that you’ve joined the Discord, so I’m sure you’ll get some more help there!

I have! Turns out it was just a bricked save that I was using to check and that the original worked fine. Classic.

Seriously, though, thank you so much for your efforts to try and help me out! I really appreciate it~

Solved! Thanks to everyone who helped me out~

Assuming you set all the synonyms for EXAMINE in the vocabulary{} section, then in the interests of simpicity, you could try this.

Ooh, such neat and beautiful code, Garry, thank you so much!