A reminder on how to hide spoilers!

You can use tags in square brackets to either blur spoiler text inline or by multiple paragraphs, or you can fold extended passages into a Details tag. Both of these are accessible from the gear button when creating a post. Highlight your spoiler text and choose “Blur Spoiler”. 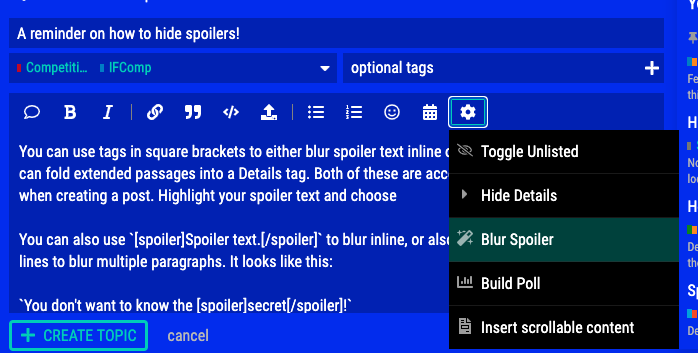 You can blur inline for just a few words, or put tags on lines alone to blur multiple paragraphs in between.

This paragraph isn’t a spoiler.

But this one is.

And so is this one.

You can also hide spoiler text by folding it behind a [details] tag:

Your [details] [/details] tags need to be on separate lines alone, it will not work inline.

I just figured this out ony own a few days ago. I always thought that button was for settings so I never clicked it. What a stupid choice for an icon.

What a stupid choice for an icon.

To be honest, that gear icon is a catch-all and configurable. The options to blur spoiler text, hide details, and insert scrollable content are custom Discourse forum plugins we chose to include, so that gear is meant to be generic and catch anything new that is added based on the needs of the forum!

Oh! I thought it was chosen by discourse. o.o I wouldn’t have phrased it so crudely if I thought a mod chose it. I thought I was complaining about The Man. My apologies.

I wouldn’t have phrased it so crudely if I thought a mod chose it.

We didn’t choose it, the gear is just “where Discourse plugins for message compositions go.”

In fact, the icon is actually chosen by whatever theme you have selected. I believe most probably keep it consistent as a gear, but theme creators can swap in any graphics they want. We could probably change it to something else if we wanted to mod the theme style.

In fact, when I screenshot examples, I need to remember to switch back to the default IntFic theme, since I tend to live in the “Ghost” theme or the “Dark” theme. “Vincent” was my jam for a while, but I’ve found Ghost offers the most contrast. I actually find “Hibiscus” to be the most pretty to read, but when I use that theme I find myself getting lost as to where all the buttons are since they’re more subtle.

Thanks so much for this, I had been looking for this for 15 minutes when I saw your post!

I thought I had checked every icon looking for spoilers but obviously not so.

I prefer the “Dark” theme. Dark mode for all the things. o.o

“Alien Night” actually includes a toggle switch between light and dark modes - if you ever have trouble reading something that is formatted in dark text.

I’m not sure if it’s the case for every forum theme, but Firefox on Android chokes on large spoiler blocks.

It seems to have no problem with the details tag, so I’d suggest using spoiler for blurring a few key words at a time, and details for hiding whole paragraphs.

I’m not sure if it’s the case for every forum theme, but Firefox on Android chokes on large spoiler blocks.

This is a known issue with mobile Firefox.

I’ve noticed that large blocks of spoiler text tend to make the site very slow and unresponsive on mobile. Scrolling becomes janky, and page elements often appear blurry for several (very long!) seconds until the browser has finished mining enough Bitcoin to fully render the canvas or whatever is going on. See attached screenshot for an example. Has anyone else had this issue? [Screenshot_20200810-113950]

For me, the blur filter problem has been fixed on Firefox since a recent update that introduced the new rendering engine to the stable release branch. This is at least some compensation for disabling most of the available extensions, but that’s a rant for another day.