A map of IF as I've experienced it

I typed up a map (might be too small to read) of all the IF communities I’ve run into over time. I thought I’d share it here.

Let me know what kind of stuff I’m missing, I’m always interested in finding out more! 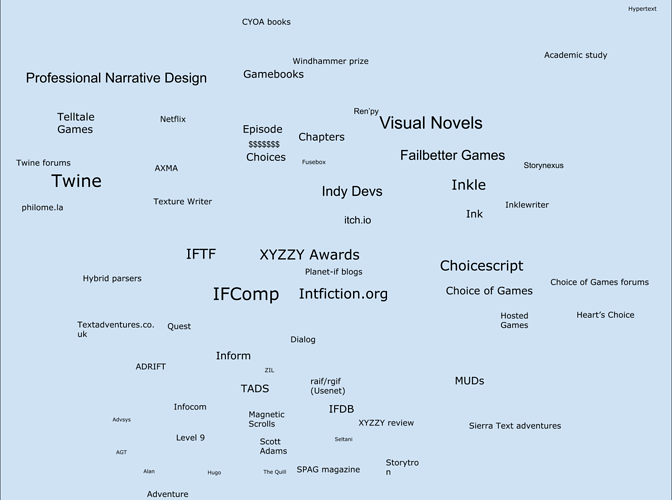 The location of Hypertext. =)

It was paywalled and only accessible to academics for years. I’m not aware of anyone citing it as in influence lol

I don’t know if you’ve played them, but the Quantic Dream games always had a big impact on me. They’re the studio behind Fahrenheit (aka Indigo Prophecy), Heavy Rain, Beyond: Two Souls, and Detroit: Become Human.

There’s also Supermassive who did Until Dawn and Man of Medan. The third part of their “Dark Pictures” trilogy, Little Hope, should be out sometime this year.

Thanks! I was hoping to learn more about things like this!

I’d recommend expanding the gamebooks section, because that one mention simplifies it a bit too much IMHO.

For a lot of people in the UK in the 1980s Fighting Fantasy gamebooks - a UK series of books - were highly influential re interactive fiction / roleplaying. They were more complex than Choose Your Own Adventure books from the US, and influenced a generation of UK kids, including ones who went on to write IF.

And of course it’s come full circle since with Inkle and others doing IF app versions of Fighting Fantasy books like Sorcery.

Ah, that sounds so lovely. That makes me want to learn more about gamebooks!

A surprising amount of gamebooks have been released on Kindle and such as well. Most are in standard ebook format, but a few even have light scripting (like the Lone Wolf books) so they’re playable as a standard game even on a Paperwhite. Even the ones that are just ebooks have links on the “turn to page XX” choices, so you don’t have to locate the section yourself.

For news and info on gamebooks, I usually use this site as a resource. https://gamebooknews.com/

There’s also this program that takes all of the Fabled Lands books (which were released for public use, just like the Lone Wolf books were) and turns it into a cohesive package in Java.

The FL books were really interesting because they were open world and each book was a part of the world. For example, in book 1, it would have something like “If you choose to cross the sea on the ship, turn to section 45 of Book 2”. In book 2, you could take the ship to travel back to book 1 at any point. In other words, each book was an expansion pack.

Wow, you guys are right, there is a ton of stuff. That website looks huge! I really look forward to exploring all this.

Wait the second part is out? (after Man of Medan?)

Nope. Until Dawn counts as the first part and Man of Medan is the second part. Little Hope will be out Q3 of this year.

Ah, that sounds so lovely. That makes me want to learn more about gamebooks!

I loved the Lone Wolf gamebooks when I was younger.

@mathbrush & @tayruh if you are interested head over to https://www.projectaon.org, where Joe Dever has made some of his books available for download free of charge.

In Lone Wolf, however, you do not only make key decisions in the text, but also choose your equipment and unique abilities, which may help you to survive through encounters that have both strategic and random elements. Lone Wolf books are also relatively unique in that the books can be read and played individually or as part of the larger series, where you can use skills and items gained from one book in another book.

I appreciate it, but I usually play the games on my phone. Since they’re public use, there are a bunch of free versions of the game on android (and probably iOS, but I don’t do Apple products).

The following is edited because I mistakenly gave misinformation:

New Order is the follow up series to the one covered in the other two apps. You assume the role of a disciple of the Lone Wolf, instead of playing the Lone Wolf like usual.

I don’t see Choose Your Story on there.

…of course obviously I’m biased, but it’s been around almost 20 years now.

Choose Your Story is definitely more prominent than many things I mentioned on there. Thanks for the reminder!

As I mentioned on your Twitter thread, I’m surprised that the IFDB isn’t more prominent on your map. After all, you are the No.1 reviewer there!

Call me old fashioned, but for me it’s still the centre of the IF world, and I visit it every day.

I love IFDB! I find it’s very prominent among parser writers and mildly popular among Twine authors. There’s a surprising number of people who don’t use it at all (a lot of people on textadventures.co.uk), and there are so many huge collections of stories in the commercial world that just ignore it