4x4 Galaxy is now available to play on itch, with an improvement that was suggested (by more than one person) during the Thing – you can now sell star crystals by tens

Thanks to everyone who played, reviewed and commented on my game! 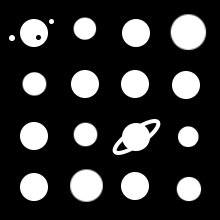 Congratulations on being a best in show. I played 4x4 Galaxy more times than I’d like to admit before I finally beat it. You blended several roguelike elements together into a pretty darn enjoyable game.

Thanks! I find it really interesting that several reviewers and commenters mentioned the roguelike feel and high difficulty level of 4x4 Galaxy. Making the game hard wasn’t really my goal (though I also didn’t try to make it easy, so…) - but I guess with all the randomization going on it’s not even possible to have a difficulty level that’s identical for all players. But I’m really happy you (and other people) enjoyed the gameplay, even with all the unexpected (and perhaps unfair) game overs!

It was a really fun game to write, and I’m already working on a gameplay sequel (set on a fantasy archipelago), where I want to include an advanced combat system, more varied activities, more quests, and many other things I didn’t manage to add to Galaxy before the SpringThing deadline. So, I most likely won’t release it before late next year - but I’m already having fun building the various little systems.

I think the difficulty was reasonable. For a roguelike you could even say it’s on the easier side. It did take a learning curve to understand the various mechanics, and that’s a hallmark of roguelikes. The whole core of the idea upon a roguelike is that its difficulty forces you to experience its intricacies and reduce what you consider unexpected by playing it multiple times.

I’m very much looking forward to your next game!

I never got close to winning without savescumming. (But that was fine by me!)

Nice. I think this was my favorite of the Spring Thing games I played. Very old school gameplay, but well-polished.

I’ve added an autosave function, which should make the difficulty level less frustrating, and expanded saves titles to include planet names.

The link in the top post goes to the updated version.