You can examine directions - could be useful!

I noticed by chance you can examine directions! This could be useful. Say you were on top of a tower and need to look around.

But should it only work on viable exits? I found it works for all possible directions that aren’t exits in your game.

Please see my screenshot for an example. 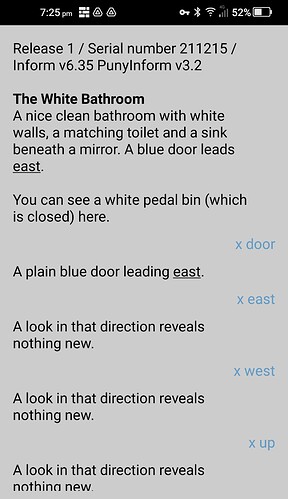 There shouldn’t be a need for it to work on a viable exit. For instance:

IMO it’s unwise to assume that players know that they can do this; you’d need to explicitly emphasize it in ABOUT/HELP if you need to put criticial information in there.

I would think that EXAMINE ALL will cover it. No?

I don’t think it even works in most TADS games.

This should be implemented also for LISTEN, for implementing a well-known method of finding noisy things (whose, being also a mil/Nav historian, is known to me as “marching/Sailing toward the sound of guns”) whose, AFAICT was never implemented in IF

(actually, even being deaf, I manage to find umpteen times my late mother’s lost cell phone simply… calling it and following the ringing !)

This should be implemented also for LISTEN

Listening to something is implemented but usually just says something like “You hear nothing unusual.” You can take advantage of that. See the Recipe Book 3:8.

I thought of several instances where it wouldn’t be right to examine every direction:

I’m sure you could probably add a generic message “You can’t look that way right now” and just cater for the directions you can look in.

(It’s not like “You can’t go that way” messages. Players reliably bump into those, so authors habitually customize them with good info.)

Arguably the library default should be even more discouraging. “Unhelpful” or some such. That’s terse, but it’s consistent with all of “You can’t do that”, “you can’t see anything”, and “you can see stuff that’s already been mentioned in the room description”.

I suppose if the description were “Looking to the north you see…” or “If you look north you can see…” someone might type LOOK NORTH. I can’t imagine anyone ever typing EXAMINE NORTH!

Sorry, I meant both LOOK DIR and X DIR. They’re the same action in Inform/PunyInform.

(Early versions of I6 supported “X NORTH WALL”, but that was dropped long ago because not all locations have walls.)

EXAMINE DIRECTION has been de facto outside the IF concensus since the early days.

Trinity implements “LOOK direction”, allowing each room to define which objects you see trough SEE-N, SEE-S, etc. properties, as well as SEE-ALL for looking left and right. See PRE-DUMB-EXAMINE, which is otherwise mainly used to discourage “LOOK object”, for details. But I don’t think it even occurred to me to use that when I was first playing the game.

I guess it didn’t occur to most testers either, because I’ve since found a couple of possible issues with it.

That’s one of the things I found fascinating about the leaked Infocom source code: Some early games implement commands that must have seemed like good ideas at the time, but which were dropped in later games.

E.g. in Zork I, you can ask questions like “IS THE LEAFLET IN THE MAILBOX” and the game will give you a sensible response.

E.g. in Zork I, you can ask questions like “IS THE LEAFLET IN THE MAILBOX” and the game will give you a sensible response.

Ooh, I wonder if that goes back to SHRDLU.

Ooh, I wonder if that goes back to SHRDLU.

No idea. Either way, it seems to have been abandoned pretty quickly. (In Starcross, it appears to only work with objects you are carrying, making it even less useful.)

Perhaps it was meant to give the impression that you were having a friendly conversation with to the parser, rather than using it to control the game? If so, Seastalker may be another example since it lets you use “GIVE ME THE object” instead of “TAKE object”.

I think it makes sense to use in certain locations, like lookout points where you first give a vague description of the surroundings. To give a response, you could throw in a before routine for the location with something like:

Except for a few limited cases, I think it’s a bad idea. If a player stumbles across it, then they will feel compelled to look in every direction in every room. As there’s up to twelve directions in every room, that’s a lot of unnecessary looking.

To answer the original question, it is difficult to implement it in a generic way so that it only works with valid exits, as exits may return a door or a string or a routine. These cases are difficult (though not impossible) to handle.

Case 1: well, often I actually look under the bed when lying on (it’s an elbow and neck move…)

case 2: as Japanese roleplay games player quickly understand, this can led on a risque trope with NPC…

It’s not something I was planning to use yet, but an accidental discovery I thought might be useful to someone (maybe).

Ha, you got me Piergiorgio_d_errico! Though I don’t understand your reply to my second case.

“You are tied to a chair fixed to the ground, with a head grip that prevents you from turning around, so you can only look ahead.”

on the second case, I can’t figure now how to put it in a gentlemanly manner…